From Wikipedia, the free encyclopedia
Drainage basin of the Tennessee River. 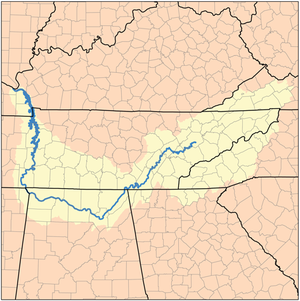 Tennessee Valley is a generally accepted term for North Alabama, anchored by the city of Huntsville (analogous to referring to Greater Philadelphia as the Delaware Valley).

The Upper Tennessee Valley, looking east from the edge of the Cumberland Plateau near Rockwood, Tennessee

The Tennessee Valley begins in the upper head water portions of the Holston River, the Watauga River, and the Doe River in Northeast Tennessee and Southwest Virginia, as well as east of Asheville, North Carolina, with the headwaters of the French Broad and Pigeon rivers, all of which join at the confluence of the French Broad and the Holston to form the Tennessee River in Knoxville. From there, the river travels southwest, absorbing additional tributaries of the Little River, the Little Tennessee, and the Clinch, and further down, the Hiwassee and the Ocoee (both of which have sources in Georgia), before reaching Chattanooga.

The river then enters the Tennessee River Gorge as it winds its way around the lower corner of the Cumberland Plateau, reaching the lower portion of the Sequatchie Valley. After traversing North Alabama, the river veers northwestward. From the beginning of the Tennessee Valley to this point is roughly 150 miles (240 km); as it runs through East Tennessee the Valley is bound on the east by the Appalachian Mountains (including the Great Smoky Mountains) and on the northwest by the Cumberland Plateau and Cumberland Mountains.

After forming the boundary between Alabama and Mississippi for a stretch of 10 miles (16 km), the river reenters Tennessee, where it creates the dividing line between Middle Tennessee and West Tennessee. It empties into the Ohio River in western Kentucky, where it divides the region known as the Jackson Purchase from the rest of Kentucky.

Geologically, the eastern portion of the Tennessee Valley consists of many small valleys and ridges within a great valley. The larger region is termed the Ridge and Valley Province and the great valley is termed the Great Appalachian Valley.