Stafford County is a county located in the Commonwealth of Virginia. It is a suburb outside of Washington D.C. It is approximately 40 miles (64 km) south of D.C. It is part of the Northern Virginia region, and the D.C area. It is one of the fastest growing, and highest-income counties in America. As of the 2010 census, the population was 128,961. [2] Its county seat is Stafford. [3]

Located across the Rappahannock River from the City of Fredericksburg, Stafford County is part of the Washington-Arlington-Alexandria, DC-VA-MD-WV Metropolitan Statistical Area. In 2006, and again in 2009, Stafford was ranked by Forbes magazine as the 11th highest-income county in the United States. According to a Census Bureau report released in 2019 Stafford County is currently the sixth highest-income county in America.

For thousands of years, various cultures of indigenous peoples succeeded each other in their territories along the Potomac River and its tributaries. By the time of English colonization, there were 32 Algonquian-speaking American Indian tribes in the present-day coastal Tidewater Virginia area, including those of the Patawomeck and numerous tribes that were part of the Powhatan Confederacy. The former small tribe, still centered in Stafford County, was recognized by the state of Virginia in 2010.

The Native Americans' first recorded encounter with Europeans in this area was in 1608, with John Smith of the Jamestown Settlement. During a time of recurring tension between the early English colonists and local Native Americans, the colonists led by Samuel Argall captured Chief Powhatan's daughter, Pocahontas, while she was living with her husband, Kocoum. The colonists took her from the eastern part of this county, to a secondary English settlement, known as Henricus (or Henrico Town). Alexander Whitaker converted Pocahontas to Christianity during her captivity. He renamed her as "Rebecca" at her baptism. Rebecca/Pocahontas married English colonist John Rolfe on April 5, 1614 in Jamestown. [4] [5] Their mixed-race descendants were among the First Families of Virginia.

The English colonial government of Virginia imposed its own order on the land and peoples. In 1664 it established Stafford County from territory previously part of Westmoreland County [6] (which had been created from Northumberland County in 1653). It was named after Staffordshire, England. As originally delineated, Stafford County included a much larger area than its current borders. As population grew, the following counties and jurisdictions were created: Arlington, Fairfax, and Prince William counties, and the City of Alexandria. [6] It is part of the area now considered Northern Virginia.

George Washington spent much of his childhood in the lower part of the county at his family's home Ferry Farm (which at the time was part of King George County), along the Rappahannock River across from Fredericksburg. Colonial Forge High School was built on a tract of land owned in colonial times by his father Augustine Washington. [7] George Mason, another Founding Father, also lived in Stafford during his formative years. [8]

Aquia Church, built in 1757, is unusual among local structures for having been designed on the plan of a Greek cross rather than the more standard Roman Cross design. In addition, Aquia Church has a rare three-tiered pulpit; it has been designated as a National Historic Landmark. The Episcopal church continues to be active today. [9]

Stafford County industry and resources were important to the colony and early nation. During the Revolutionary War, the Stafford ironworks furnished arms for the colonial rebel soldiers. [10] Aquia Creek sandstone, quarried from Government Island, was used to build the White House and the U.S. Capitol. [11]

During the American Civil War, the county was part of the battlegrounds, occupied repeatedly by more than 100,000 troops for several years. In 1862, before and after the Battle of Fredericksburg, some 10,000 African-American slaves left area plantations and city households to cross the Rappahannock River, reaching the Union lines and gaining freedom. This exodus and Trail of Freedom is commemorated by historical markers on both sides of the river, in Fredericksburg and in Stafford County. [12] The Battle of Aquia Creek took place in the Aquia Harbour area. [13] Both the Union Army and Confederate Army struggled to control the strategic Potomac Creek Bridge at various times during the war.

Falmouth, a town bordering Fredericksburg, was the home of late-19th century American Impressionist artist Gari Melchers. His house, Belmont, still stands and is listed on the National Register of Historic Places.

Stafford County has developed to be one of the core counties of the Washington, D.C. metropolitan area, and Northern Virginia, the seat of government and numerous major defense installations. Marine Corps Base Quantico, occupies northern areas of this county. The FBI Academy, FBI National Laboratory and NCIS HQ are located on the Stafford side of MCBQ. Many residents commute north to work there and in other defense and federal facilities, as well as private companies, in Washington, DC and its environs on Interstate Highway 95, U.S. Route 1, and by Virginia Railway Express. Stafford County is a suburban county and home to many Washington D.C commuters and workers which work for the Federal Government. It is also home to many military families due to its proximity to MCBQ. These facts contribute to the high-income of families in Stafford County, and the high amount of home-ownership, and college graduates. Stafford County is also one of the few counties in America where black households make more than white households. In recent years Stafford County has experienced major suburbanization, and growth as more and more workers move to the suburbs for their families. Thus, many developers are currently active in Stafford County in housing and retail projects.

The county was severely affected by " Snowmageddon," the massive blizzards of December 2009 and February 2010. Stafford received some of the heaviest snow in the D.C. metropolitan area, with about 25 inches of snow in December, and 19 inches in February. [16] [17] 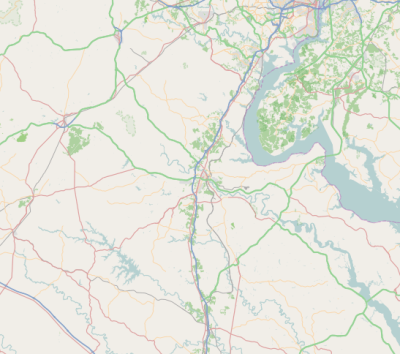 According to the U.S. Census Bureau, the county has a total area of 280 square miles (730 km2), of which 269 square miles (700 km2) is land and 11 square miles (28 km2) (3.9%) is water. [18] The Potomac River flows along part of the eastern border of the county, while the Rappahannock River runs along the extent of the county's southern border. The independent city of Fredericksburg developed at the fall line of the river, supporting mills run by water power. To the northwest of there is the Piedmont area. Aquia Creek empties into the tidal segment of the Potomac River at Brent Point in Stafford County. It is surrounded by Prince William County to the north, Fauquier County to the West, the City of Fredericksburg, and Spotsylvania County to the south. Due to its location and proximity to Washington D.C many Federal Government workers and commuters live in Stafford County. Stafford County’s location close to D.C, is one of the major reasons of the suburbanization and growth of the county

The county is divided into seven magisterial districts: George Washington, Hartwood, Falmouth, Griffis-Widewater, Aquia, Garrisonville, and Rockhill. The magisterial districts, roughly equal in population, each elect one supervisor to the Board of Supervisors which governs Stafford County. The County operates under the county form of the County Executive system of government, with an elected Board of Supervisors. The Board hires a professional, nonpartisan County Administrator to manage government agencies. The current County Administrator is Thomas C. Foley. While Stafford County is currently Republican. Due to its rapid suburbanization and growth of families, and Federal Government employees from D.C and being a part of Northern Virginia, it is turning increasingly Democratic. While the Board of Supervisors is dominated by Republicans which the Democrats have made strong gains to turn in the 2021 election. The School Board(officially nonpartisan) is a 3-3-1 split. Another sign of Stafford County turning increasingly Democratic is the Democrats pick ups in the Virginia House if Delegates. In 2017 the Democrats flipped the 2nd District using Democrat Jennifer Carroll Foy a fierce advocate of the Equal Rights Amendment. In 2019 the 28th was eyed nationally as a key district for Virginia Democrats to flip both chambers of the State Legislature(which they did). Joshua Cole the 2017 candidate which lost by 73 votes in 2017 due to ballot and voter district problems won in 2019 helping the Democrats flip Virginia. The race received much media attention and mega donors from across the country.

Past Composition of the Stafford County Board of Supervisors 2003-2005

Growth being a main concern of residents four incumbents lost re-election bids. Gary Snelings, a Republican from the Hartwood district lost re-election by 36 votes to Independent Joe Brito who was backed by Democrats and organizations that endorsed Democrats. Republican incumbent Mark Osborn lost re-election in the Falmouth district for a second term, to Democratic political newcomer George Schwartz. Democrats in the northern part of the county were replaced by Republicans. Gary Pash, a Democrat representing the Garrisonville District and Kandy Hillard a Democrat representing the Aquia District were replaced by Republicans Mark Dudenhefer and Paul Milde, respectively.

Peter Fields, the Democratic incumbent from the George Washington District declined to run for a third term. Harry Crisp, a Democrat who ran for the George Washington District beat, Tom Coen a Republican who also ran last election cycle against Peter Fields. Jack Cavilier, an Independent incumbent from the Griffis-Widewater district ran for re-election as a Republican and lost to Democratic newcomer Bob Woodson. Woodson made history as being the first African-American ever elected to the Stafford County Board of Supervisors. Republican Incumbent Robert Gibbons declined to run for another term. Republican Cord Sterling who worked for Senator John McCain (R-AZ) ran for the Rockhill District and won against a Democrat.

Republican Supervisor Bob Thomas from the George Washington District decided to run for state legislature. In a competitive Republican Primary he beat Supervisor Paul Milde from the Aquia District, and former Supervisor Susan Stimpson from the Falmouth District. Tom Coen, a Republican candidate who ran twice for the seat was named Interim Supervisor and won a special election as a Independent to finish out Bob Thomas’ term. Incumbent Republican Supervisor Meg Bohmke won re-election in the Falmouth District against a Democrat. Cindy Shelton, a Republican, beat a Democrat and an independent in a three way race in one of the most Democratic districts in Stafford County. Democrat Incumbent Laura Sellers from the Garrisonville District ran for re-election against Mark Dudenhefer who declined to run for re-election for state legislature. In a rematch Mark Dudenhefer won again to reclaim his seat by 13 votes. Gary Snelings, the Republican incumbent from the Hartwood District won re-election.

Though the school board in Stafford County, and the Commonwealth of Virginia is officially nonpartisan. Candidates are endorsed by parties and hold views similar to these parties.

By 2005, Stafford County's population was 72.8% non-Hispanic whites. African-Americans were 17.0% of the total population. Native Americans were 0.4% of the county total, Asians 2.3%, and Native Hawai'ians and other Pacific islanders 0.2%. Latinos were 6.4% of the population. This was higher than the total for all of Virginia. 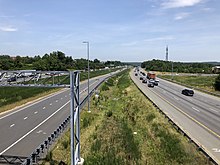 I-95 northbound in Stafford County 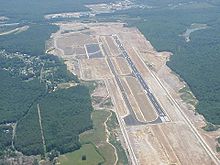 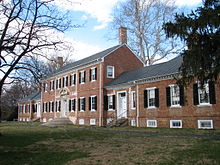