Picayune ( /pɪkəˈjuːn/ pik-ə-YOON) is the largest city in Pearl River County, Mississippi, United States. The population was 10,878 at the 2010 census. Picayune was added to the New Orleans metropolitan area in 2014. The city is located approximately 45 miles (72 km) from New Orleans, Hattiesburg and Gulfport-Biloxi. The Stennis Space Center is 10 miles (16 km) away.

Picayune was incorporated in 1904, purportedly named by Eliza Jane Poitevent Nicholson in 1884, the owner and publisher of the New Orleans Daily Picayune, a newspaper named for the Spanish coin. The post office contains a mural, Lumber Regions of Mississippi, painted by Donald H. Robertson in 1940. Federally commissioned murals were produced from 1934 to 1943 in the United States through the Section of Painting and Sculpture, later called the Section of Fine Arts, of the Treasury Department. [3]

While Picayune received extensive damage from Hurricane Katrina, it was not as severe as in other nearby cities. This has caused it to become the permanent home for many who relocated from the New Orleans area and from the Mississippi Gulf Coast – who were seeking a safer home site with easy commuting to those areas.

The bulk of the Katrina damage in Picayune was caused by high winds, as the eye wall passed over the city. This resulted in widespread roof, window, and fence damage. The wind also caused hundreds, if not thousands, of downed trees – and power outages of up to a few weeks.

The local radio station is WRJW 1320-AM.

Television and Radio stations of New Orleans and Biloxi/Gulfport listening areas are part of Picayune area.

The United States Postal Service operates the Picayune Post Office. There is a mural made by the Works Progress Administration (WPA) but subsequent renovations covered up the mural with new paint. [7] 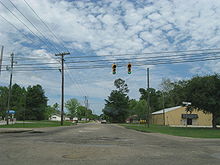 Amtrak's Crescent train connects Picayune with the cities of New York, Philadelphia, Baltimore, Washington, Charlotte, Atlanta, Birmingham, and New Orleans. The Amtrak station is situated at 100 South U.S. Route 11. There is daily service in each direction.

U.S. 11 is the main highway through Picayune. Interstate 59 (via Interstate 10) connects Picayune with New Orleans, LA, to the south and Hattiesburg, MS, Meridian, MS, and Birmingham, AL, to the north.

Mississippi Highway 43 is the main connection to and from the east, connecting to Interstate 10 near Kiln, MS.

Picayune Municipal Airport has a 5,000 ft (1,500 m) runway and is a popular destination for private fixed-wing and rotary aircraft visiting the New Orleans area. Rental car, taxi and limousine services are available.

The Margaret Reed Crosby Memorial Library serves Picayune and is the headquarters of the Pearl River County Library System.