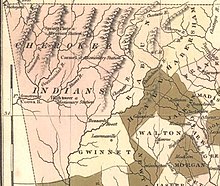 An 1822 map of Cherokee lands in Georgia

Originally, Cherokee County was more like a territory than a county, covering lands northwest of the Chattahoochee River and Chestatee River except for Carroll County. This county was created December 26, 1831, by the state legislature. It was named after the Cherokee Indians who lived in the area at that time. [3] Several other counties were carved out of these Cherokee lands as part of the Cherokee Land Lottery of 1832. [4]

An 1834 map of counties created from Cherokee land

An act of the Georgia General Assembly passed on December 3 of that year created the counties of Forsyth, Lumpkin, Union, Cobb, Gilmer, Murray, Cass (now Bartow), Floyd, and Paulding. [5] The forcible (sometimes at gunpoint) removal of the Cherokee people, leading up to the notorious Trail of Tears to Indian Territory west of the Mississippi River, began in this area the year before. The push by European Americans to expel the Cherokee was accelerated by the discovery of gold in local streams.

County courts were authorized to meet at the home of Ambrose Harnage. The settlement soon became known as Harnageville, later called Marble Works, and even later Tate, when Cherokee County was first established. Since 1880, that town has been called Tate, and it is now (since 1853) in Pickens County. Part of that county was taken directly from Cherokee, the other via Gilmer County (itself earlier taken from Cherokee).

Etowah was named the first county seat in 1833. Its name was later changed to Canton.

In 1857, part of the southeastern corner of the county was ceded by the General Assembly to form Milton County (now the city of Milton in the county of Fulton). In the 1890s, The Atlanta & Knoxville Railroad (later renamed the Marietta & North Georgia Railroad when it could not be completed to Knoxville) built a branch line through the middle of the county. When this line was bought by the Louisville & Nashville Railroad the following decade, the L&N built railroad stations at Woodstock and other towns.

Since the late 20th century, Cherokee County has been part of the Atlanta metro area. It is bisected by Interstate 575, which runs from Marietta north through Woodstock, Lebanon, Holly Springs, Canton, and Ball Ground, ending at the Pickens County line into Georgia 515, the Appalachian Parkway developmental highway. Interstate 575 is undergoing significant widening to accommodate growth in Cherokee County population.

The Georgia Northeastern Railroad operates freight service on the former L&N tracks, roughly parallel to this route. Population growth has followed the same general pattern, as well, with new suburbs in the south following the highway toward exurbs further north.

According to the U.S. Census Bureau, the county has a total area of 434 square miles (1,120 km2), of which 422 square miles (1,090 km2) are land and 13 square miles (34 km2) (2.9%) are covered by water. [6] Much of the water is in Lake Allatoona in the southwest. The lake is fed by the Etowah and Little Rivers (the county's primary waterways), and other large streams such as Noonday Creek. Much of the northern part of the county begins to rise toward the foothills.

Nine summits are listed by the United States Geological Survey Geographic Names Information System as being in the county. From tallest to lowest, they are:

These mountains are in the still-rural northern and western parts of the county. However, if considered part of metro Atlanta, Bear Mountain is the tallest in the metro area.

The county is under the jurisdiction of the Cherokee County Sheriff's Office, which is headed by Sheriff Frank Reynolds. The Cherokee County Sheriff's office is triple crown accredited by CALEA, ACA, and NCCHC. The major cities within the county have individual municipal police departments, such as Woodstock, Canton, Holly Springs, and Ball Ground.

Cherokee County had voting patterns similar to most Solid South and Georgia counties prior to 1964 in presidential elections, though Democratic Party candidates did not win by as wide margins as they did in the rest of the state and the Deep South. In fact, the county backed Republican candidates three times between 1900 and 1960. From 1964 on, the county has swung strongly toward the Republicans, only failing to vote for the Republican in presidential elections since then in 1968 when segregationist George Wallace appealed to anti-Civil Rights Act sentiment and in the two elections Georgian Jimmy Carter was on the ballot. In addition, unlike the inner suburban counties of the Atlanta metropolitan area, Cherokee County has continued to vote for Republicans by landslide margins as it lacks the increasing number of minority voters those counties have gained in recent years.

According to the local newspaper, the Cherokee Ledger-News, on August 29, 2018, with an estimated population of 254,500, Cherokee is currently the fastest-growing county in the metro Atlanta area. [19]

Private schools in Cherokee County include:

Chattahoochee Technical College has campuses in Woodstock and Canton in Cherokee County.

A redevelopment project recently completed a 10,000-square-foot (930 m2) terminal, the lengthening of the runway from 3,414 to 5,000 feet (1,041 to 1,524 m), a new parallel taxiway, instrument landing equipment, and new hangars. The new facilities will accommodate 200 corporate aircraft in hangars and provide 100 tie-downs for smaller aircraft.

The Cherokee Area Transit Service serves all of the Cherokee County area, rural and suburban.