At the time of European contact, the area of what would become Wayne County was settled by the Guale people. Being close to the coast and bordered by the Altamaha River, Wayne County's history includes occupation by Spanish missionaries at the time of the settlement of Saint Augustine as well as short-lived French occupation. The flags of France, Spain, England, and the Confederate States of America all flew over Wayne.

Seventy years after General James Oglethorpe settled the colony of Georgia and 27 years after that colony became one of the 13 original states, Wayne County came into being. The county was named for Mad Anthony Wayne whose military career had made him a well-known hero. When he surprised the British garrison at Stony Point on July 15, 1779, he acquired the nickname "Mad" Anthony. From one siege to another, he was a vital member of General George Washington's staff serving well under General Nathanael Greene and coming to Georgia in 1781 in his service during the American Revolution.

It was created by an Act of the Legislature in 1803 after the Wilkinson Treaty was signed with the Creek Indians on January 16, 1802, which ceded part of the Tallassee Country and part of the lands within the forks of the Oconee and Ocmulgee Rivers to the United States. As originally laid out, the new county – the 28th Georgia county – was a long narrow strip of land approximately 100 miles (160 km) in length but with varying measures of width along the way. It was six miles (10 km) as it stood just south of the Altamaha River, eight miles (13 km) wide near the Satilla and five miles (8 km) wide at a location about 27 miles (43 km) south of the Altamaha. All counties organized prior to 1802 were headright counties – no surveys were ever made of those counties. It was found that under the headright system more land was given away than actually existed and this was the case for Wayne County. Although created in 1803, no valid lottery was done for the county until the Land Lottery Act of 1805. The 1805 Act divided the half million acres (2,000 km2) of Wayne County, formed the Tallassee Strip, and set the stage for the land lottery that would result in more formal settlement of the area. It is the second date, December 7, 1805, that the county chose to observe as the creation date. The area was not a popular one for lottery draws as the straws were drawn sight unseen and the winner was as likely to draw swampland as he was prime agricultural lots.

The fight for the county seat

The county was slow in developing and those in the area were in no hurry to be concerned with matters governmental. On December 8, 1806, the Georgia General Assembly created appointed five commissioners to establish a permanent site for a county seat and called for county court to be held at the home of one those commissioners, Francis Smallwood, until a permanent site could be established. [3] In December 1808, the General Assembly called for a new set of commissioners to select a county seat, as the site picked by the previous set had picked a site near the upper corner of the county and was not centrally located. Court was to be held at the house of a Captain William Clements until a site was selected. [4]

In December 1823, the General Assembly appointed another board of commissioners to establish a county seat. [5]

The first post office in Wayne County was established at Tuckersville, sometimes seen as Tuckerville, on January 29, 1814. Tuckersville acted as the county seat until Waynesville was so designated. John Tucker was the first postmaster and his service was followed by William A. Knight and Robert Stafford, Jr. before the mail service was discontinued in 1827. Tuckersville disappears from most maps by 1850. Its exact location remains a mystery although it is known it was 9 miles north of Waynesville on the Post Road near the ford of Buffalo Swamp. The intersection of Mount Pleasant Road and 10 Mile Road is a possible location.

It was not until December 1829, that legislative action created a county seat. [6] Wayne County's first official county seat was Waynesville, Georgia then considered to be a central location in the long and narrow county for settlers to travel for court and other primary government functions. Waynesville was the site of Wayne County's first school, which was called Mineral Springs Academy. It was named for the famous mineral springs which were a short distance east of the residential section of the town.

In December 1832, a petition of voters from Wayne County caused the General Assembly to call for the election of another board of commissioners to establish a centrally located county seat. [7]

In the early 1840s, Waynesville was still being used as the county seat. In December 1847, the General Assembly called for another set of commissioners to select a county seat near the home of William Flowers near the ford of the Buffalo Swamp. The law also called for county court to be held at the courthouse then in existence near the residence of James Rawlinson. [8]

In January 1856, the General Assembly called for a vote to be held in Wayne County about the removal of the county seat and to where it should be removed. [9]

Although there is some doubt about whom the City of Jesup is named for, there is no doubt it became Jesup on October 24, 1870. At the time Jesup was part of Appling County. Ambling along as Station Number 6 on the Atlantic and Gulf Railroad, the town grew into a city primarily due to the efforts of its first mayor, Willis Clary. Clary had first moved to Wayne County in 1868 and was elected mayor shortly after moving into the town at a meeting held December 3, 1870. Clary is credited with convincing the Macon and Brunswick Railroad to locate its tracks so that they crossed the Atlantic and Gulf rails at Jesup. On August 27, 1872, eastern sections of Appling land districts 3 and 4 were added to Wayne County. [10] From its beginning, Jesup has been a railway town and as early as 1891, the town's population was essentially connected to the railroads in some way.

In February 1873, the Georgia General Assembly called for a vote to be held in Wayne County to be held about removing the county seat. The voters were to be given the choice of "No removal", "Removal, Jesup", "Removal, Waynesville", and "Removal, Screven." [11] Jesup was selected as the new county seat.

Although not formally incorporated until 1907, the cities of Screven and Odum are also historic railroad towns. Screven ranks as the oldest established town being formally established in 1854 when the town became a terminus on the Atlantic and Gulf Railroad. The rail line connected Screven and Thomasville which at the time was a resort city popular with Europeans and wealthy Americans. It is not known exactly when Station Number 7 became known as Screven but the town bears the name of the family of Dr. James Proctor Screven and his son, John Bryan Screven of Savannah who were operating the railroad at the time of its inception. Screven's first businessman and landowner, C. C. Grace helped to build the community. Likewise, Godfrey Odum used real estate to build his fortune and to improve the community into a town. Odum became a stop on the Macon and Brunswick Railroad and later became a part of the East Tennessee, Virginia, and Georgia. Odum was known as Satilla on an 1870 timetable from the Macon and Brunswick and before that it was known as Haslum. Rail access made it easier for Odum's turpentine and sawmills products to be shipped to larger markets.

Henry W. Grady once said South Georgia was only suited for pine trees and cows and it is the pine that has made Wayne County the pine tree infested place it is. Others have said, "You can always tell someone from Wayne County, but not much." Through the years, turpentine and naval stores made communities, schools and churches spring up along the paths of the railroads and the streams and creeks. Places like Mount Pleasant, Gardi, McKinnon, Doctortown, Manningtown, Brentwood, Ritch, O'Quinn, Madray Springs and Piney Grove were centers of family life.

Prior to 1964, Wayne County voted in line with most counties in the Solid South and Georgia, consistently supporting Democratic presidential candidates. From 1964, the county has swung hard to the Republican Party in most presidential elections, with the only times since then they have failed to win the county since then being 1968 for segregationist George Wallace as well as 1976 and 1980 for Georgian Jimmy Carter. Republican candidates have picked up increasing margins of victory in every election since 1992, while Democratic percentages have decreased in every election since 1988. 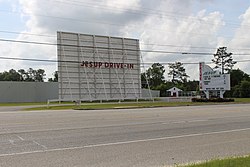 Wayne County is also home of one of the United States' few operational drive-in movie theaters, The Jesup Drive In, built in 1948 by Ward P. Riggins Sr. as a family drive-in theater, located on U.S. Highway 301 North in Wayne County.