On December 10, 1817, Mississippi became the 20th state admitted to the Union. By 1860, Mississippi was the nation's top cotton-producing state and enslaved persons accounted for 55% of the state population. Mississippi declared its secession from the Union on March 23, 1861, and was one of the seven original Confederate States, which constituted the largest slaveholding states in the nation. Following the Civil War, it was restored to the Union on February 23, 1870.

Until the Great Migration of the 1930s, African Americans were a majority of Mississippi's population. Mississippi was the site of many prominent events during the civil rights movement, including the Ole Miss riot of 1962 by white students objecting to desegregation, the 1963 assassination of Medgar Evers, and the 1964 Freedom Summer murders of three activists working on voting rights. With large areas of agriculture and rural towns, Mississippi frequently ranks low among states in measures of health, education, and development, and high in measures of poverty. In 2010, 37.3% of Mississippi's population was African American, the highest percentage of any state.

Refresh with new selections below (purge) 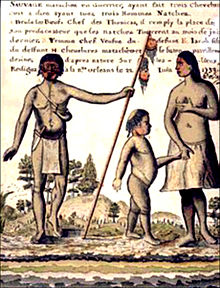 Tunica chief, Brides les Boefs (translated as Buffalo Tamer), holding a staff with three Natchez scalps, their enemies and the son and wife of the slain chief Cahura-Joligo, 1732

The Tunica people were a group of linguistically and culturally related Native American tribes in the Mississippi River Valley, which include the Tunica (also spelled Tonica, Tonnica, and Thonnica); the Yazoo; the Koroa (Akoroa, Courouais); and possibly the Tioux. They first encountered Europeans in 1541 - members of the Hernando de Soto expedition. The Tunica language is an isolate.

Over the next centuries, under pressure from hostile neighbors, the Tunica migrated south from the Central Mississippi Valley to the Lower Mississippi Valley. Eventually they moved westward and settled around present-day Marksville, Louisiana. Read more...