Wilkinson County is a county located in the U.S. state of Mississippi. As of the 2010 census, the population was 9,878. [1] Its county seat is Woodville. [2] The county is named for James Wilkinson, a Revolutionary War military leader and first governor of the Louisiana Territory after its acquisition by the United States in 1803. 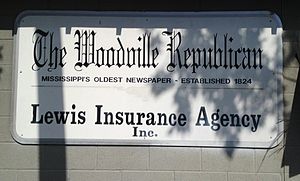 Wilkinson County's Woodville Republican, begun in 1823, is (as of 2012) the oldest newspaper and the oldest business in continuous operation in Mississippi. The sign, facing Depot Street, is on the exterior west wall of the newspaper offices in Woodville.

In the nineteenth century, this county was developed by European-American settlers as cotton plantations along the Mississippi River, which forms the western border of the county. Much of the bottomlands and interior were undeveloped frontier until after the American Civil War. The intensive cultivation depended on the labor of numerous enslaved African Americans; in the early nineteenth century, more than a million slaves were relocated to the Deep South from the Upper South in a major forced migration. The population of this county quickly became majority black as enslaved workers were brought in.

The West Feliciana Railroad was later built to help get the cotton commodity crop to market. Some planters got wealthy during the antebellum years and built fine mansions in the county seat of Woodville, Mississippi. Jane and Samuel Emory Davis family moved here in 1812 with their several children, and lived at a plantation near Woodville. Their youngest son, Jefferson Davis, attended the Wilkinson Academy in Woodville for two years before going to Kentucky to another school. [3]

Following Reconstruction, white violence against blacks increased through the later decades of the 19th century and into the early 20th century. According to 2017 data compiled in Lynching in America (2015-2017), some nine lynchings of African Americans were recorded in Wilkinson County. [4]

The peak of population in the county was reached in 1900, after which many blacks left in the Great Migration to the North and Midwest, to escape the racial segregation and violence, and the disfranchisement suffered in the state since passage by the white Democratic-dominated legislature of a new constitution in 1890 raising barriers to voter registration. More constraints came with Jim Crow laws.

In the early 20th century the boll weevil infestation destroyed much of the cotton crops, and mechanization caused a further loss of agricultural jobs. The exit of many African Americans from the state did not change the state's exclusion of African Americans from politics. They were not enabled to vote until after passage of the federal Voting Rights Act in 1965. Cotton cultivation was revived, but it is produced on a highly mechanized, industrial scale.

Southwest Mississippi was an area of white violence against blacks during the Civil Rights Movement. In February 1964, the White Knights of the Ku Klux Klan officially formed. Clifton Walker, 37, a married father of five and employee of International Paper Company in Natchez, who was not politically active, was killed in an ambush on Poor House Road near his home. The evidence showed there had been a crowd of shooters on both sides of the road. [5] This lynching cold case has never been solved, although it was among numerous ones that the FBI was investigating since 2007, before the Donald Trump administration ended the effort in 2018.

Timber has been harvested and processed in the county as a new commodity crop. The population of the rural county has continued to decline because of lack of jobs. Towns have started to develop heritage tourism to attract more visitors. 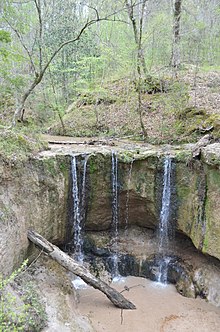 Wilkinson County has the sixth lowest per capita income in Mississippi and the 52nd lowest in the United States.