Portrait of John Floyd, for whom Floyd County was named 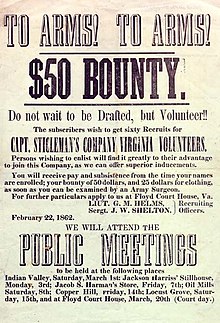 Floyd County's recorded history begins with the arrival of traders, trappers and hunters in Southwest Virginia in the 18th century. The earliest known travel way through present day Floyd County was the Trader's Path, running from east to west across the Roanoke River where Back Creek enters the river, by John Mason's, R. Poage's, the headwaters of Back Creek and southwest over Bent Mountain. The trail continued westward through the Little River area to the Lead Mines.

The first known attempts to settle the area appear to have been made during the 1740s. In 1745 the Virginia Council granted James Patton, of Augusta County, among others, 100,000 acres (400 km2) on the New River and the westward flowing waters, including the Little River area. In 1749 the Royal Company of Virginia also received a grant on the westward flowing waters, putting the two companies in competition with one another to settle the area. The first surveying of the land occurred in the late 1740s. [3]

On January 15, 1831, the General Assembly of Virginia passed an act creating the present county of Floyd out of the county Montgomery. The new county was named for the then Governor of Virginia, John Floyd. [4] The new county's courthouse was completed in 1834. In 1870 a portion of Franklin County was added to Floyd County. The first Commonwealth's Attorney was William Ballard Preston, a nephew of John Floyd, who would later serve as Secretary of the United States Navy. Preston was followed in later years by Jubal Early, who would later serve as a general for the Confederate Army. [5]

The county seat of Floyd County was first called Jacksonville for Andrew Jackson, seventh President of the United States (1829–1837). Jacksonville was first incorporated in 1858 and then re-incorporated on February 19, 1892 to expand the town boundaries. On January 23, 1896, the General Assembly passed an Act officially changing the name of the Town of Jacksonville to the town of Floyd.

The county became a destination for those involved in the counterculture during the 1960s and 1970s, particularly those who wanted to live in closer contact with nature. [6] In the late 1990s, the Rivendell community was established by a group of Christians so they could practice a lifestyle consistent with their Reformed Churches' interpretations of the Bible and also, in part, to be better isolated from possible societal disruptions caused by the year 2000 problem. Most of the original members of this community have moved on.

Floyd County was also a setting for the ministry of Reverend Bob Childress, whose life was chronicled in the book The Man Who Moved a Mountain.

The county's location directly adjacent to both the Roanoke and the Blacksburg-Christiansburg Metropolitan Statistical Areas have contributed to modest population growth in contrast to most rural counties in Southwest Virginia. Several bloggers live in the county and frequently post observations about the community and its rural setting. [7]

Floyd County also has a strong music and literary scene. Three establishments in Floyd regularly offer a variety of live music during the weekends ranging from traditional styles such as Bluegrass and Old-time music to contemporary and alternative acts. Best known is the Friday Night Jamboree held at The Floyd Country Store. [8] Both the Country Store and County Records, founded in the 1960s, [9] are featured on the Virginia Heritage Music Trail called "The Crooked Road." [10] In the early 21st century, Floyd became the home of an annual world music festival called FloydFest.

The Chateau Morrisette and Villa Appalaccia wineries have been established since the 1980s. 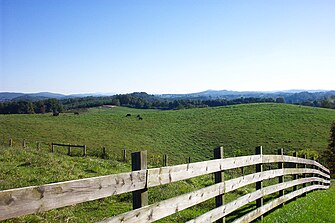 Floyd County is situated atop a high plateau of the Blue Ridge Mountains which divides the eastward flowing from the westward flowing waters. With the high topography, no streams flow into Floyd County. The county is drained primarily by Little River and its tributaries which flow into New River below the Claytor Lake Dam and, in turn, by way of the Kanawha River, the Ohio River and the Mississippi River, into the Gulf of Mexico. The headwaters of the south fork of the Roanoke River are in the northeastern part of the county. One particular fast stream is Shooting Creek, named for its speed over rocks. This creek today follows Shooting Creek Road from Floyd into Franklin County. In was once the site of moonshine liquor distilleries and the lawlessness that surrounded this industry.

Floyd County is an anomaly in Virginia politics, being a solidly Republican county even during the height of the Democratic " Solid South". This is due to the fact that the county's inhabitants largely deserted the Confederate army during the Civil War, [18] so that it was one of very few white areas in antebellum slave states to endorse Radical Reconstruction. Over generations, despite the rejection of such policies by the Republican Party, this has translated into powerful party loyalty thereto. Floyd was the only Virginia county to vote for Herbert Hoover against Franklin Roosevelt in 1932, and the last Democrat to carry the county in a presidential election was Winfield S. Hancock in 1880. [19] Theodore Roosevelt did win Floyd County in 1912 as a result of a split in the Republican Party, whilst Democratic Senatorial candidate Mark Warner carried the county in his landslide 2008 victory.