Manassas ( /məˈnæs əs/; [8] formerly Manassas Junction) [9] is an independent city in the Commonwealth of Virginia. As of the 2010 census, the population was 37,821. [10] The city borders Prince William County, and the independent city of Manassas Park, Virginia. The Bureau of Economic Analysis includes both Manassas and Manassas Park with Prince William County for statistical purposes.

Manassas also serves as the seat of Prince William County. It surrounds the 38-acre (150,000 m2) county courthouse, but that county property is not part of the city. The City of Manassas has several important historic sites from the period 1850–1870.

The City of Manassas is part of the Washington-Arlington-Alexandria, DC-VA-MD-WV Metropolitan Statistical Area and is in the Northern Virginia region. 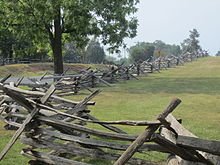 The Second Battle of Manassas (or the Second Battle of Bull Run) was fought near Manassas on August 28–30, 1862. At that time, Manassas Junction was little more than a railroad crossing, but a strategic one, with rails leading to Richmond, Virginia, Washington, D.C., and the Shenandoah Valley. Despite these two Confederate victories, Manassas Junction was in Union hands for most of the war.

The Manassas Historic District; Cannon Branch Fort; Liberia, a plantation house; and the Manassas Industrial School for Colored Youth are listed on the National Register of Historic Places. [12] 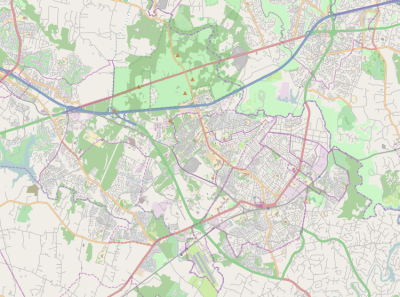 Manassas has a council-manager system of government. As of October 2019 the city manager is William Patrick Pate; the mayor is Harry J. Parrish II; and the vice mayor is Pamela J. Sebesky. [1] [2]

The climate in this area is characterized by hot, humid summers and generally mild to cool winters. According to the Köppen Climate Classification system, Manassas has a humid subtropical climate, abbreviated "Cfa" on climate maps. [14]

Some neighborhoods within the City of Manassas include:

Georgetown South is a PUD 30 miles south of downtown Washington, D.C. in Manassas. [15] When it was built in the 1960s, it was seen as a "tony, southern sister for the District’s famous and affluent Georgetown". [16] It is composed entirely of 3-bedroom, 2-story red brick townhomes built between 1960 and 1970, some with exteriors painted in creams or pastels. The neighborhood features a community center that offers a walk-in pediatric clinic, seminars, workshops, and citizenship courses. [16] In spite of high hopes during construction, the neighborhood was hit extremely hard during the foreclosure crisis. "At the height of the housing bubble, nearly 60 percent of residents were homeowners," but in 2013, 60% of residents were renters. [16] As houses eventually became vacant, they left in their wake room for crime to creep in. Today, the neighborhood is known more for its elevated crime rate, including the use of drugs and violent domestic crimes, than it is for its history or connection to the nation's capital. [16]

Historic Downtown Manassas, also called the Manassas Historic District or Old Town Manassas, is a neighborhood in the city-center of Manassas. According to Historic Manassas, this seven-by-one-block area alone contains 206 buildings and one contributing object. [17] Its northern border is Portner Avenue and its southern border is Prince William Street. [18] As recently as the early 1990s, Downtown Manassas was known to be rundown, and was primarily used by workers commuting from the area into Washington, D.C. In 1995, however, local businessowner Loy E. Harris founded Historic Manassas and invested in the area in an effort to bring it back to life. Harris's death in 1999 from cancer was felt in the community, [19] but his organization, Historic Manassas, remained. In the 2010s, further efforts were made to make the area successful not only commercially but residentially. Developers seized the opportunity and constructed three- and four-story townhomes along eastern Center Street, eastern Church Street, and Prescott Avenue to usher in a younger generation of homeowners seeking urban amenities in a suburban setting.[ citation needed] On the opposite end of the neighborhood sits the Harris Pavillion, an outdoor venue that is converted to an ice skating rink in the winter. [20] Just south of Old Town sits the Manassas Museum, which commemorates the city's history and involvement in the American Civil War. [21] Downtown Manassas contains several notable buildings:

The Old Town Triangle is a historic residential district adjacent to Old Town Manassas. It is named for its triangular shape, with three street borders: Grant Avenue, Sudley Road, and Portner Avenue. [18] The Old Town Triangle mostly comprises spacious colonial, manor, and single-story homes built between 1900 and 1955. [22] They are valued substantially higher than similar homes in adjacent neighborhoods. [22] The Old Town Triangle contains some of Manassas's most notable buildings, including:

31.4% of the population was of Hispanic or Latino origin. This can be broken up ethnically as follows:

The ACS estimated median household income for the City in 2010 was $70,211. 36% of the population has a college degree. [32] Almost as many people commute into the City of Manassas for work (13,316) as out (13,666), with the majority of out commuters traveling to Fairfax and Prince William counties for their jobs. Unemployment as of July, 2010 in the City is 6.3%, which was well below that of the United States at 7.9%. City residents are primarily employed in Professional, Scientific and Technical Services, and Health Care and Social Assistance. [34]

For many years, Manassas was one of the more conservative areas of Virginia, but in 2008, it swung dramatically to the Democrats, going from a 13-point victory for George W. Bush to an 11-point win for Barack Obama. It has supported Democratic presidential candidates by double-digit margins in the last three elections, partly due to the larger Democratic trend in Northern Virginia.

During the second quarter of 2014, crime in the City of Manassas has decreased by 9 percent. [36] Calls for service from residents have decreased 27 percent from 2013 to 2014. Overall crime in the City of Manassas has steadily decreased over the years, as it has nationwide. About 1 in 5 reports taken during the 2nd quarter of 2014 was for a part 1 crime. The number of aggravated assaults reported in 2014 year-to-date and during the second quarter has increased by about half when compared to 2013 cases (+46%, +64%, respectively). Part 1 property crimes decreased by 19 cases during the 2nd quarter of 2014 (burglary, larceny, and auto theft). Overall, year-to-date totals indicate decreases in part 1 crimes (-14%) and all other offenses reported to police (-9%). [36]

The city's third-largest employer is Micron Technology. Headquartered in Boise, Idaho, this manufacturer of semiconductors operates its wafer factory in Manassas, where it employs 1650 people directly, and several hundred others through vendor contracts. In December 2018, Micron began a $3 billon-dollar expansion project at the Manassas site, and it's expected to create 1,100 jobs by 2030. [40] Other major employers include Lockheed Martin (1500 employees) and the Novant Prince William Health System (1400 employees).

11% of people working in Manassas live in the city, while 89% commute in. 36% commute from Prince William County and 18% commute from Fairfax. Additionally 16,700 people commute from Manassas to the surrounding areas. In 2016, 3.3% of Manassas residents were unemployed. [41]

Manassas Regional Airport is within the city limits. It is the busiest general aviation airport in Virginia, with more than 415 aircraft and 26 businesses based onsite, including charter companies, avionics, maintenance, flight schools and aircraft services.

Amtrak 50, the Cardinal, is arriving in Manassas station on a Friday evening. The train left Chicago last evening and is on its way to New York City. The station is shared with Virginia Railway Express and hosts the city's visitors center.

Manassas began life as Manassas Junction, so named for the railroad junction between the Orange and Alexandria Railroad and the Manassas Gap Railroad. The O&A owned the railway from Alexandria through Manassas to points south, ending in Orange, Virginia, while the MGRR was an independent line constructed from Manassas Junction through the Manassas Gap westward. In addition Manassas was the site of the first large scale military use of railroad transportation.

These original routes are now owned by the Norfolk Southern railroad. Amtrak and the Virginia Railway Express (VRE) provide regular inter-city and commuter service to the city and surrounding area on the tracks owned by NS. Manassas station is served by VRE and three Amtrak routes: the New York City to Chicago Cardinal, Boston to Roanoke Northeast Regional, and New York to New Orleans Crescent.

The train station was also used for the cover photo for the Manassas (album).

Some schools in the Prince William County Public Schools district have Manassas addresses, though they are located, and serve areas, outside the Manassas city limits.

Also in the vicinity of Manassas are branch campuses of American Public University System, George Mason University, Northern Virginia Community College, ECPI College of Technology and Strayer University. Though some of these are just outside the city limits in Prince William County, NVCC and Strayer call these branches their Manassas Campuses.

Most private schools in Manassas are associated with religious institutions, like All Saints Catholic Church [55] or St. Thomas Methodist Church. [56] But some private schools in the area are based in other non-traditional schooling ideologies, such as the Reggio-Emilia [57] approach or trademarked curriculum such as the F.L.EX.® Learning Program. [58]