Glynn County, one of the original eight counties in the state created on February 5, 1777, was named after John Glynn, [4] a member of the British House of Commons who defended the cause of the American Colonies before the American Revolution. The Battle of Bloody Marsh was fought in Glynn County. James Oglethorpe built Fort Frederica which was used a base in the American Revolutionary War. Glynn Academy is the second oldest school in Georgia.

Glynn County includes the most prominent of the Sea Islands of Georgia, including Jekyll Island, St. Simons Island, and Sea Island. The Georgia poet Sidney Lanier immortalized the seacoast there in his poem, " The Marshes of Glynn", which begins:

Glooms of the live-oaks, beautiful-braided and woven
With intricate shades of the vines that myriad-cloven
Clamber the forks of the multiform boughs,--

Wrought of the leaves to allure to the whisper of vows,
When lovers pace timidly down through the green colonnades
Of the dim sweet woods, of the dear dark woods,
Of the heavenly woods and glades,
That run to the radiant marginal sand-beach within

The wide sea-marshes of Glynn;--

The former Naval Air Station Glynco, named for the county, was a major base for blimps and anti-submarine warfare during World War II. The Federal Law Enforcement Training Center (FLETC) now uses a substantial part of the former NAS as its main campus. 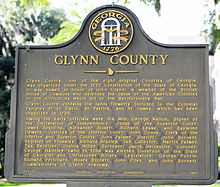 According to census 2000 the largest European ancestry groups in Glynn County are:

The Hanlin Group, Inc., which maintained a facility named "LCP Chemicals" in Glynn County just outside the corporate limits of Brunswick, was convicted of dumping 150 tons of mercury into Purvis Creek, a tributary of the Turtle River and surrounding tidal marshes between the mid-1980s and its closure in 1994. Three executives were sentenced to prison time over the incident. [21]

The LCP facility had been declared a Superfund site when it closed in 1994 and was already under scrutiny by the EPA when Service biologists discovered mercury poisoning in endangered wood storks on St. Simons Island. Fish, shellfish, crabs, and shrimps taken in coastal waters as well as other bird species also contained the toxic metal. The Service traced the source of the contamination to the LCP plant and documented the extent of the damage to wildlife resources–an effort that resulted in the addition of Endangered Species Act charges to those that would be brought against Hanlin and its officers. [22]

On August 29, 2009, the county suffered the worst mass murder in Georgia state history, when seven individuals were found dead at a trailer in New Hope Mobile Home Park. Two others were critically injured, one of them dying later in hospital. Guy Heinze, Jr. was later convicted of the murders.

On the afternoon of February 23, 2020, Ahmaud Marquez Arbery, an unarmed 25-year-old African-American man, was fatally shot after being pursued and confronted by Travis McMichael and his father Gregory McMichael. [23] The incident took place in Satilla Shores, a community near Brunswick. [24]