From Wikipedia, the free encyclopedia
For other places with the same name, see Greenville (disambiguation).
Not to be confused with Greenwood, Mississippi.
City in Mississippi, United States

Greenville is a city in, and the county seat of, Washington County, Mississippi, United States. [3] The population was 34,400 at the 2010 census. It is located in the area of historic cotton plantations and culture known as the Mississippi Delta.

This area was occupied by indigenous peoples for thousands of years. When the French explored here, they encountered the historic Natchez people. As part of their colony known as La Louisiane, the French established a settlement at what became Natchez, Mississippi. Other Native American tribes also lived in what is now known as Mississippi.

The current city of Greenville is the third in the State to bear the name. The first, located to the south near Natchez, became defunct soon after the American Revolution, as European-American settlement was then still concentrated in the eastern states.

The second Greenville was founded in 1824 by American William W. Blanton, who filed for land from the United States government. He was granted section four, township eighteen, range eight west. This plot now constitutes most of downtown Greenville. It was named by its founders for General Nathanael Greene, friend of President George Washington, for whom the county was named.

Many migrants came to the area from the eastern and Upper South states, seeking land for developing cotton plantations. In 1830 the United States Congress passed the Indian Removal Act, which authorized the government to make treaties to extinguish Native American land claims in exchange for lands west of the Mississippi River. They forced most of the Southeastern tribes to Indian Territory during the following decade.

The second town was thriving hamlet in the antebellum years, as cotton plantations developed in the area generated high profits for major planters. They built their wealth on the labor of enslaved African Americans.

Greenville was designated as the county seat in 1844. It had become a trading center for the region's plantations. The two previous county seats, New Mexico and Princeton, had also been located along the Mississippi River, and had been eroded by the waters, to the point that they were destroyed. [4] As county seat, it was the trading, business, and cultural center for the large cotton plantations that surrounded it. Most plantations were located directly on the Mississippi and other major navigable tributaries. The interior bottomlands were not developed until after the Civil War.

The destruction of Greenville and the Civil War

The town was destroyed during the Union Army's actions related to the siege of Vicksburg. Troops from a Union gunboat landed at Greenville. In retaliation for being fired upon, they burned every building. The inhabitants took refuge in plantation homes of the area. When the war ended, veterans of Mississippi regiments returned to find Greenville in a state of ruin.

The former residents soon decided to build again. They chose a new site three miles away, at the highest point on the Mississippi River between the towns of Vicksburg and Memphis. Much of the land belonged to the Roach and Blanton families; the major part of the area selected was within property owned by Mrs. Harriet Blanton Theobald. She welcomed the idea of a new Greenville, and donated land for schools, churches and public buildings. She was called the " Mother of Greenville". Major Richard O’Hea, who had planned the wartime defense fortifications at Vicksburg, was hired to lay out the new town.

Greenville recovered prosperity, still based on cotton, despite the decline in world markets for this commodity. In the early 20th century, its elite families had considerable political influence in the state, and US Senator Leroy Percy was from here. Several residences and other buildings from the late 19th and early 20th centuries have been listed on the National Register of Historic Places. It was a center of Delta culture in the early 20th century. This city adapted the former site to served as industrial fill.

African Americans in the Delta developed rich varieties of innovative music. Nelson Street is a historic strip of blues clubs that drew crowds in the 1940s and 1950s to the flourishing club scene to hear Delta blues, big band, jump blues and jazz. Record companies came to Greenville to recruit talent. [5] It was similar to Beale Street in mid-20th century Memphis. [6]

Southern Whispers Restaurant on Nelson Street in Greenville was the second site identified on this trail; this was a stop on the Chitlin' Circuit in the early days of the blues. The historic marker in front of the restaurant commemorates its importance in the history of the blues in Mississippi. [7] [8]

In 2020 the city ordered churches to shut down to prevent the spread of COVID-19 and issued citations and fines to those attending a drive-in church gathering. The U.S. Justice Department intervened on behalf of the church. [9]

Greenville is located on the eastern bank of Lake Ferguson, an oxbow lake left from an old channel of the Mississippi River. One floating casino is located on the lake near the downtown area known as the Trop Casino Greenville, with a second just west of the city near the Greenville Bridge known as Harlow's Casino Resort. Chicago Mill and Lumber Co. operated a lumber mill on the lake two-tenths of a mile south of the casino levee parking lot; the mill specialized in making hardwood boxes until it closed. 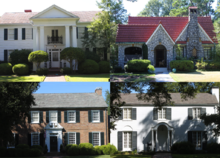 Circa 2008 there were ten grocery stores operated by ethnic Chinese people. There were 42 such stores in the city in 1951, but since then there had been a flight of ethnic Chinese from the Delta. [16]

The private schools, Washington School and Greenville Christian School, [18] also serve the city; as well as the parochial schools, St. Joseph High School [19] and Our Lady of Lourdes Elementary [20] which are part of the Roman Catholic Diocese of Jackson.

Delta Democrat Times is the daily newspaper of the town.

The Greenville Bucks were a minor-league baseball team in the Cotton States League from 1922 to 1955.

The Greenville Bluesmen were an independent minor league professional baseball team from 1996–2001 in Greenville.

The Mississippi Miracles, formerly the Mississippi Stingers, were an American Basketball Association franchise from 2004–2006 in Greenville.

Greenville will become host to a mega-sports complex for young athletes.[ citation needed]

The Winterville Mounds has been designated as a state park and National Historic Landmark. A museum on the grounds displays artifacts recovered in professional excavations and adds to the interpretation of this complex, and the park has walking trails. It is located about 3 miles north of the city. It can be reached at 2415 Highway 1 N.

The movies Crossroads (1986) and The Reivers (1969) were filmed in Greenville. [22] Also, the 1975 song " Mississippi" by the Dutch band Pussycat mentions Greenville throughout the song.