Frederick County is located in the Commonwealth of Virginia. As of the 2010 census, the population was 78,305. [2] Its county seat is Winchester. [3] The county was formed in 1743 by the splitting of Orange County. It is Virginia's northernmost county.

The area that would become Frederick County, Virginia was inhabited and transited by various indigenous peoples for thousands of years before European colonization. The "Indian Road" refers to a historic pathway made by local tribes.

Colonization efforts began with the Virginia Company of London, but European settlement did not flourish until after the company lost its charter and Virginia became a royal colony in 1624. In order to stimulate migration to the colony, the headright system was used. Under this system, those who funded an emigrant's transportation costs (not the actual colonizers) were compensated with land. [4] During the early 17th century, King Charles II granted several acres of colonial Virginia lands to “seven loyal supporters,” including Lord Fairfax. This passed to Thomas Fairfax, 5th Lord Fairfax of Cameron, who married the daughter of Thomas Colepeper, who also owned several acres of land. After their son, Lord Thomas Fairfax, inherited the combined grants, he controlled over 5,000,000 acres of land in Virginia, including much of the land that became Frederick County. [5]

Frederick County was created from Orange County in 1738, and was officially organized in 1743. [6] The Virginia Assembly named the new county for Frederick Louis, Prince of Wales [7] (1707–1751), the eldest son of King George II of Great Britain. At that time, "Old Frederick County" encompassed all or part of four counties in present-day Virginia and five in present-day West Virginia:

As Commander-in-Chief of the new Colonial Virginia regiment in 1754, Colonel George Washington's headquarters were located in Winchester before and during the French and Indian War. He resigned from military service in 1758; only to be appointed General by the Continental Congress sixteen years later. Meanwhile, Washington represented Frederick County in his first elective office, having been elected to the House of Burgesses in 1758 and 1761. Daniel Morgan was another famous General during the American Revolutionary War, from (present day Clarke County).

Winchester changed hands between the Confederate and Union Armies on average once every three weeks during the war. Many battles were fought in Frederick County. Some of those battles include:

The first constitution of West Virginia provided for Frederick County to be added to the new state if approved by a local election. [8] Unlike those of neighboring Berkeley and Jefferson counties, Frederick County residents voted to remain in Virginia despite being occupied by the Union Army at the time.

Four (alkaline, saline, chalybeate, and sulphured) types of mineral water springs naturally occur on the land that would later be named Rock Enon Springs. [9]:868 The area was once called Capper Springs, named for area settler John Capper. [10]:57 William Marker bought the 942 acres (381 ha) in 1856 and built a hotel, the first building of the Rock Enon Springs Resort, that survived the American Civil War. [11] On March 24, 1899 the Shenandoah Valley National Bank purchased the property for $3,500. [12]:9 During the summer of 1914 botanists found polypodium vulgare, phegopteris hexagonoptera, adiantum pedatum, pteris aquilina, and cheilanthes lanosa on the property. [13] The idea that soaking in the spring water had medical value was likely a large part of the tourism. [14] In 1944, when that healing idea was likely no longer generally accepted as true, the Glaize family sold the property to the Shenandoah Area Council who turned what was once a resort into Camp Rock Enon. [11] In 1944 the 5 acres (0.020 km2) Miller Lake was created by adding a 200 feet (61 m) earth dam across Laruel Run using equipment owned by the Federal Fish Hatchery in Leestown. [15]:M4 In 1958 "walnut, chestnut and persimmon trees" were planted on the property. [16]:50 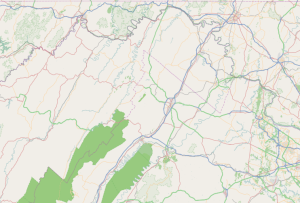 Frederick is represented by Republican Jill Holtzman Vogel in the Virginia Senate, Wendy Gooditis (D), Chris Collins (R), and Dave LaRock (R) in the Virginia House of Delegates, and Jennifer Wexton (D) in the U.S. House of Representatives. 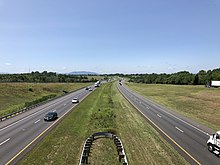 I-81 southbound in Frederick County, near Stephens City 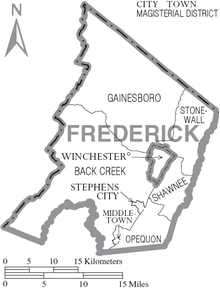 Despite being the county seat, Winchester, like all cities under Virginia law, is an independent city—politically independent of any county.