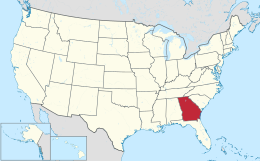 Georgia's musical history is diverse and substantial; the state's musicians include Southern rap groups such as Outkast and Goodie Mob, as well as a wide variety of rock, pop, blues, and country artists such as the late Ray Charles, Otis Redding, James Brown, and The Allman Brothers Band. The music of Athens, Georgia is especially well known for a kind of quirky college rock that has included such well-known bands as R.E.M., The B-52's, and Pylon.

The state's official music museum is the Georgia Music Hall of Fame, located in Macon, Georgia from 1996 until it closed in 2011. Colleges such as the University of Georgia and Columbus State University have extensive music departments.

The " ring shout" is an African American musical and dance tradition that is among the oldest surviving African American performance styles in North America. The ring shout tradition is rare in the modern Southern United States, but it still found in McIntosh County, Georgia, where black communities have kept the style alive. The McIntosh County ring shout is a counterclockwise ring dance featuring clapping and stick-beating percussion with call-and-response vocals. The ring shout tradition is strongest in Boldon, Georgia (also known as Briar Patch), where it is traditionally performed on New Year's Eve. [1]

The Georgia Sea Island Singers are an important group in modern African American folk music in Georgia. They perform worldwide the Gullah/Geechee music of the Georgia coast and Sea Islands, and have been touring since the early 1900s; the folklorist and musicologist Alan Lomax discovered the Singers on a 1959-60 collecting trip and helped to bring their music to new audiences. The Georgia Sea Island Singers have included Bessie Jones, Emma Ramsey, John Davis, Mayble Hillery, and Peter Davis. [2] [3]

Fife and drum blues has been documented in west central Georgia.

The Freedom Singers are a group that formed in 1962 in Albany to educate communities about issues related to the Civil Rights Movement through song.

The Sacred Harp, first published in 1844, was compiled and produced by Georgians Benjamin Franklin White and Elisha J. King. They helped establish a singing tradition also known as Sacred Harp, fasola, or shape note singing. The Sacred Harp system use notes represented by different shapes according to scale degree, intended to make it easy for people to learn to sight-read music and perform complex pieces without a lot of training. [4] Established in 1933, [5] the Sacred Harp Publishing Company, located in Carrollton, Georgia, publishes the most widely used 1991 edition of The Sacred Harp. [6] Hugh McGraw of Bremen, Georgia, served as the company's executive secretary from 1958–2002 and helped encourage Sacred Harp's recent resurgence in popularity. [7] A Georgia-based music label, Bibletone Records, has reissued a 28-cut CD of Sacred Harp music originally released as LPs by the publishing company. [8]

Folksinger/ songwriter Hedy West, active in the American folk music revival and famous for her song " 500 Miles", was born in Cartersville.

On June 14, 1923, the country music recording industry was launched in Atlanta when Fiddlin' John Carson made his first phonograph record for Okeh Records Company representative Polk C. Brockman. Carson's recordings of " The Little Old Log Cabin in the Lane" and "The Old Hen Cackled and the Rooster's Going to Crow" sold over 500,0000 copies and opened the eyes of record company executives to the market for " old-time" country music. Along with Carson, Gid Tanner and His Skillet Lickers and Georgia Yellow Hammers made Atlanta and North Georgia an early center of old-time string band music.

In the 1960s, guitarist Chet Atkins, born in Luttrell, Tennessee but raised in Hamilton, Georgia, drew on jazz and pop music to help create the smoother country music style known as the Nashville Sound, expanding country music's appeal to adult pop fans. Country music superstars Alan Jackson, Trisha Yearwood, and Travis Tritt are natives of Georgia. Other successful country music acts from Georgia include Norman Blake, Jerry Reed, Brenda Lee (who had a #1 Hot 100 hit with " I'm Sorry" in 1960), Billy Currington, Cyndi Thomson, Jennifer Nettles of Sugarland, Daryle Singletary, Doug Stone, John Berry, Rhett Akins, Mark Wills, the Zac Brown Band, and Lady Antebellum, as well as up and coming stars Jason Aldean, Brantley Gilbert, Luke Bryan, Thomas Rhett, Cole Swindell (attended Georgia Southern University), Kip Moore, Lauren Alaina, and Jessie James. Other notable country musicians from Georgia include Corey Smith (graduated from UGA) and Tabby Crabb from Sumter Co., who worked with the original Urban Cowboy Band, Randy Howard, Hank Cochran, Keith Urban, and many others in Nashville. Georgia country music superstars with a #1 album on the Billboard 200 chart include Atlanta-area musicians Alan Jackson with 3 #1 albums like Drive in 2002, and Zac Brown Band with 3 like You Get What You Give in 2010 (Zac Brown attended the University of West Georgia); Jason Aldean with 4 consecutive #1 albums on the Billboard 200 like the country rock Night Train in 2012 to 2018, Luke Bryan (from south Georgia, he attended Georgia Southern University) with 3 like Crash My Party in 2013, Thomas Rhett with 2 like Life Changes in 2017, and Sugarland with 2 #1 albums like The Incredible Machine in 2010.

Augusta native James Brown (d.2006) and Macon native Little Richard (d.2020) "The Architect of Rock and Roll" started performing in Georgia clubs on the Chitlin' Circuit, fused gospel with blues and boogie-woogie to lay the foundations for rock & roll and soul music, and rank among the most iconic musicians of the 20th century. Ray Charles was also born in Georgia; Charles helped to invent the soul genre by borrowing elements of rhythm and blues, country, jazz, gospel, and blues. Ray Charles (d. 2004) had 3 #1 hits on the Billboard Hot 100, including " Georgia on My Mind" in 1960 (which is the official state song of Georgia). Ray Charles won another Grammy for Album of the Year for his 2004 Genius Loves Company. Atlanta native Chuck Willis was a blues, R&B, and rock and roll singer and songwriter active from 1950-58. In the 1960s, Atlanta native Gladys Knight proved one of the most popular Motown recording artists, while Otis Redding, born in the small town of Dawson but raised in Macon, defined the grittier Southern soul sound of Memphis-based Stax Records. Gladys Knight "The Empress of Soul" had a #1 hit on the Billboard Hot 100 with " Midnight Train to Georgia" in 1973. Otis Redding (d. 1967, buried near Macon) had a #1 hit on the Hot 100 with " (Sittin' on) the Dock of the Bay" in 1968. Motown producer and disco artist Hamilton Bohannon was born in Newnan, Georgia. Dave Prater of the soul duo Sam & Dave was born in Ocilla, Georgia. 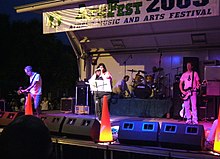 The earliest Atlanta-based music maven, Bill Lowery, started the careers of Ray Stevens, Joe South, Jerry Reed, and countless others, and created the first Georgia-based springboard for such talent, National Recording Corporation, sporting not only a record label, but a recording studio and pressing plant. Lowery would later work with the likes of Billy Joe Royal, Mac Davis, Dennis Yost & The Classics IV, and The Atlanta Rhythm Section, giving Atlanta national relevance with his Lowery Music group of publishing companies, one of the world's biggest music publishers. Noted session and touring drummer, Michael Huey, started his career at Bill Lowery studios.

The Allman Brothers Band, founded in Jacksonville, Florida, moved to Macon at the urging of their manager, Phil Walden, who had previously managed Otis Redding. The Allman Brothers had a #2 hit on the Billboard Hot 100 with " Ramblin' Man" in 1973. Their album Brothers and Sisters went to #1 on the Billboard 200. Gregg Allman (d. 2017), his brother Duane Allman (d. 1971), and Berry Oakley (d. 1972) are buried in Macon. Walden's Macon-based Capricorn Records, spearheaded the rise of Southern rock, and the success of the Allman Brothers paved the way for other Southern rock bands, including Atlanta Rhythm Section, South Carolina-based Marshall Tucker Band and Lynyrd Skynyrd, also founded in Jacksonville. Georgia has also produced a number of Southern rock groups throughout the last three decades, including the Black Crowes (who had a #1 album on the Billboard 200 in 1992), The Georgia Satellites (had a #2 Hot 100 hit with Keep Your Hands to Yourself in '87), Blackberry Smoke, Confederate Railroad, and Drivin' 'N' Cryin'.

The city of Athens, Georgia, home to the University of Georgia, has been a fertile field for alternative rock bands since the late 1970s. Notable bands from Athens include R.E.M., The B-52's (had a #4 Billboard 200 album with Cosmic Thing in 1989, Fred Schneider attended the University of Georgia), Widespread Panic, Drive-By Truckers, Cartel, Of Montreal, and Dead Confederate. Athens is also home to the Elephant 6 Recording Company, an indie collective whose members include The Apples in Stereo and Neutral Milk Hotel. R.E.M. had 2 #1 albums on the Billboard 200, including Out of Time in 1991. R.E.M. had 6 #1 songs on the Alternative Songs chart in the late 80s and 90s. Michael Stipe attended the University of Georgia.

Acoustic rock/folk duo the Indigo Girls got their start in Decatur (they both attended Emory University in Atlanta, and alternative rock bands Collective Soul (had 7 #1 songs on the Mainstream Rock chart in the 90s) and September Hase began in Stockbridge and Tifton, respectively. Rock pianist Elton John spends some time living in Atlanta, and singer-songwriter John Mayer (" Why Georgia") lived in Atlanta after dropping out of the Berklee School of Music in 1998. Indie rock and hard rock band Manchester Orchestra had a #13 album on the Billboard 200 in 2014 with Cope.

Georgia has contributed to the ska scene with the bands Treephort, 50:50 Shot, and The Taj Motel Trio. Ska punk has seen a recent revival in Georgia with the regional ska festival, the Mass Ska Raid, taking place for the first time in 2008.

Along with Louisiana and the rest of the Southern area, there is a strong heavy metal music scene in Georgia, with bands such as Mastodon (had a #6 album on the Billboard 200 in 2014), Baroness, Collective Soul, Royal Thunder, Black Tusk, Kylesa, Withered, Sevendust, ISSUES, Norma Jean, and Attila. Thrash metal band Tetrarch are from Atlanta.

Neon Christ are a notable band from the Atlanta Hardcore scene.

Cat Power (Chan Marshall) was born in Atlanta and got her start there.

The 2000s saw the rise of Atlanta indie rock bands The Black Lips, Deerhunter, and The Coathangers.

Pop rock singer songwriter Phillip Phillips, who won the eleventh season of American Idol in 2012, was born in Albany. He had a #4 album on the Billboard 200 in 2012.

Atlanta-based OutKast proved one of the first commercially successful hip hop groups from outside of New York or Los Angeles. In the 1990s and 2000s, Atlanta became the leading center of urban music. Artists like Lloyd (had a #2 album on Billboard 200 in 2007), T.I., TLC ( Left Eye is buried in Lithonia, GA), Monica, Usher, 112, Ludacris (attended Georgia State University), YoungBloodZ, OutKast, Goodie Mob ( Gnarls Barkley with CeeLo Green had a #4 album on Billboard 200 in 2006) (as well as the Dungeon Family music collective which both are members of) and producers like Organized Noize, L.A. Reid, and Jermaine Dupri " Welcome to Atlanta", the latter of whom founded the successful record labels LaFace and SoSo Def, have blurred musical boundaries by blending R&B singing with Hip-Hop production. More recently, Atlanta is also known as a center of crunk music, an electric bass-driven club music whose most visible practitioner has been Atlanta-based producer/hype man/rapper Lil Jon.

Lyricist Johnny Mercer, whose works include the Academy Award-winning song " On the Atchison, Topeka and the Santa Fe" and other entries in the Great American Songbook of pop music (like " Moon River") standards, is a native of Savannah and buried there. Mercer co-founded Capitol Records.