From Wikipedia, the free encyclopedia
For the historical proposed state in Eastern Tennessee, see State of Franklin.
Not to be confused with Franklin County, Tennessee.
City in Tennessee, United States

Franklin is a city in, and the county seat of, Williamson County, Tennessee, United States. [5] About 21 miles (34 km) south of Nashville, it is one of the principal cities of the Nashville metropolitan area and Middle Tennessee. As of 2018, its estimated population was 80,914, and it is the seventh-largest city in Tennessee. [1]

The city developed on both sides of the Harpeth River, a tributary of the Cumberland River. In the 19th century, much of the area economy (especially the cultivation of tobacco and hemp) depended on enslaved labor. After Reconstruction, racial violence increased in this area, when whites worked to ensure dominance. As the county seat, Franklin was the site of several lynchings of African-American men in this period. Franklin was a trading and judicial center for Williamson County, which was primarily rural in land use into the late 20th century, with an economy based on traditional commodity crops and purebred livestock.

Since 1980, the northern part of the county has been developed for residential and related businesses, in addition to modern service industries. The population has increased rapidly, with growth stimulated by that of the Nashville metropolitan area. Despite recent growth and development, Franklin is noted for its many historic buildings and neighborhoods, which are protected by city ordinances. [6]

Since 2017, its two historic plantations have begun to provide extended tours including the antebellum history of enslaved workers at those sites. In 2018, as a result of multi-racial leadership, the city installed the first of five historic plaques in the courthouse square as part of the "Fuller Story", the first acknowledgement of the 220-year history of African Americans in the city. In 2019 a memorial statue of a soldier of the United States Colored Troops will be installed to join the Confederate memorial statue in the square. 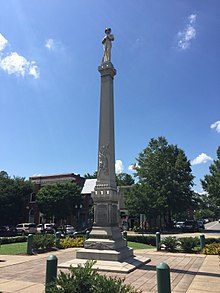 The European-American community of Franklin was founded October 26, 1799, by Abram Maury, Jr. (1766–1825). Later a state senator, he is buried with his family in Founders Pointe. Maury named the town after national founding father Benjamin Franklin. [7] [8]

Ewen Cameron built a log house, the first by a European-American in new settlement. Cameron was an immigrant, born February 23, 1768, in Bogallan, Ferintosh, Scotland. He immigrated to Virginia in 1785 and traveled into Tennessee along with other migrants after the American Revolutionary War. They displaced the indigenous tribes that had historically occupied this region. Cameron died on February 28, 1846, after living 48 years in the same house. He and his second wife, Mary, were buried in the old City Cemetery. Some of his descendants continue to live in Franklin.

This area is part of Middle Tennessee, and white planters prospered in the antebellum years, with cultivation of tobacco and hemp as commodity crops, and raising of purebred livestock. Many migrants came from central Kentucky, where they had raised these crops and livestock. Through the antebellum years, white farmers depended on numerous enslaved African Americans as workers.

During the Civil War, Tennessee was occupied by Union troops from 1862. Franklin was the site of a major battle in the Franklin–Nashville Campaign. The Second Battle of Franklin was fought on November 30, 1864, resulting in almost 10,000 casualties (killed, wounded, captured, and missing). Forty-four buildings were temporarily converted to use as field hospitals. The Carter, Carnton, and the Lotz [9] plantation houses from this era are still standing and are among the city's numerous examples of historic architecture.

After the war, there was considerable violence in this area as whites attempted to dominate the majority-black population of freedmen and assert white supremacy. [10] In 1866 the Ku Klux Klan, a secret organization of insurgent white Confederate veterans, was founded in Pulaski, Tennessee. Soon it had chapters in many towns, including Franklin, as well as chapters in other Southern states.

After Tennessee authorized African Americans to vote in February 1867, well before the Fifteenth Amendment was passed, most freedmen and formerly free people of color joined the Republican Party. White Democrats struggled to suppress their voting. For instance, on July 6, 1867, a political rally of Union League black Republicans in Franklin was disrupted by Conservatives, who were mostly white but included some blacks. Later that evening, what became known as the "Franklin Riot" broke out. Black Union League men were ambushed by whites at the town square and returned fire. An estimated 25 to 39 men were wounded, most of them black. One white man was killed outright, and at least three black people died of wounds soon after the confrontation. [11] [12] [10]

On August 15, 1868, in Franklin, Samuel Bierfield became the first Jewish man to be lynched in the United States. He was fatally shot by a large group of masked men believed to be KKK members. They attacked him for treating blacks equally to whites in his store. Bowman, a black man who worked for Bierfield and was with him at his store, was fatally wounded in the attack and soon died. [13]

After the Reconstruction era, white violence continued against African Americans, rising toward the turn of the century in what has been called the nadir of race relations. Five African Americans were lynched in Williamson County from 1877 to 1950, most during the decades around the turn of the century, a time of high social tensions and legal racial oppression in the South. [14] Some of these murders took place in Franklin, when men were taken from the courthouse or county jail before trial.

For example, on August 10, 1888, Amos Miller, a 23-year-old African American, was lynched before his trial. He was forcibly taken from the courtroom by a white mob and hanged from the railings of the balcony of the Williamson County Courthouse. [15] On April 30, 1891, Jim Taylor, another African-American man, was lynched on Murfreesboro Road in Franklin.

Population growth slowed noticeably from 1910 to 1940 (see table in Demographic section), as many African Americans left the area in the Great Migration to northern industrial cities for jobs and to escape Jim Crow conditions.

Since the late 20th century, however, Franklin has rapidly developed as a residential and business suburb of Nashville, Tennessee, which has been a catalyst of regional economic growth. Franklin's population has increased more than fivefold since 1980, when its population was 12,407. In 2010, the city had a population of 62,487. [16] As of 2017 [update] Census estimates, it is the state's seventh-largest city. In 2017, the City of Franklin was ranked the 8th fastest-growing city in the nation by the U.S. Census Bureau, increasing 4.9 percent between July 1, 2016 and July 1, 2017. [17]

Many of its residents commute to businesses in Nashville, which is 20 miles away. The regional economy has also expanded, with considerable growth in businesses and jobs in Franklin and Williamson County.

In the early 21st century, leaders of historic preservation and city churches have worked to recognize the lives and contributions of African Americans to Franklin and the area. Since the 2015 Charleston church shooting in South Carolina and the 2017 Charlottesville car attack at a protest in Virginia, four local leaders developed a proposal for the "Fuller Story" as a project of Franklin public history. This is a series of historical plaques to be placed at the courthouse square to enlarge the history represented there. For instance, the square is known by many as the site of a former slave market in the antebellum years, when slavery was central to Middle Tennessee society, but there has been no official acknowledgement of this past.

A Confederate memorial was installed in the early 20th century by conservative whites, who have largely controlled the local memorialization of the American Civil War. As part of the "Fuller Story," a statue of a soldier of the United States Colored Troops, to mark the contributions of African Americans in ending the war, reuniting the Union, and gaining their emancipation and franchise, is to be erected in 2019 in front of the old courthouse. This project was approved by the mayor and city council. In 2018 the first of the historic plaques was installed; these will mark the history of slavery, the Reconstruction era and Jim Crow, and civil rights. [18]

Franklin has benefited from its proximity to Nashville, whose growth has been a catalyst for this county seat. The city is home to major health-care related businesses such as HealthSpring, Clarcor, Community Health Systems, Healthways, Home Instead Senior Care, MedSolutions Inc, and Renal Advantage Inc. In addition, Magazines.com, the Provident Music Group, World Christian Broadcasting, and gas utility Atmos Energy's Kentucky/Mid-States division's North American headquarters are in Franklin.[ citation needed] Automakers Nissan [21] and Mitsubishi Motors [22] also have their North American corporate headquarters in Franklin.

Planned development includes the construction in Dover Center of the North American headquarters of the Chinese manufacturer Triangle Tyre Company. [23]

Cool Springs is a business district that has developed within the City of Franklin since the early 1990s. As of 2009, it was home to several Fortune 500 headquarters, many in the healthcare industry. [24] In 2016, CKE Restaurants announced the relocation of its corporate headquarters to Cool Springs. [25]

According to the City's 2017 Comprehensive Annual Financial Report, [26] the top employers in the city are:

The city is run by a mayor, elected at-large in the city, and a board of eight aldermen. Four of the latter are elected from single-member districts of roughly equal population, and four are elected at-large. This type of voting structure results in a board that is dominated by the majority of voters, as half the aldermen and the mayor must be elected by majority voting. All electoral offices are for four-year terms, with the ward alderman elected in one cycle, and the mayor and at-large aldermen elected two years later. The city's policies and procedures are decided by the Board of Mayor and Aldermen.

Resolutions, municipal ordinances, and the municipal code are carried out by the city's various departments. These are: Administration, Building and Neighborhood Services, Engineering, Finance, Fire, Human Resources, Information Technology, Law, Planning and Sustainability, Parks, Police, Sanitation and Environmental Services, Streets, and Water Management. These 14 departments are overseen by the City Administrator, a professional manager hired by the Board of Aldermen. [27]

In addition, such major institutions as Vanderbilt University and Fisk University, a historically black university, are located in nearby Nashville. They each include a full range of professional and graduate programs in addition to undergraduate colleges.

The Water Management Department operates a system that provides water and sewer services to city residents and residents of surrounding areas. [32] Electricity is provided by the Middle Tennessee Electric Membership Corporation (MTEMC), which serves several of the suburban counties of Nashville and purchases power from the Tennessee Valley Authority (TVA). [33] Natural gas is provided by Atmos Energy. [34]

Pinkerton Park is a 34-acre (14 ha) municipal park in Franklin. Fort Granger is north of the park, and may be reached by a trail. [35]

Pilgrimage is a music festival put together by Kevin Griffin, who lives and works as a musician in Franklin. Premiering in 2015, it draws nationally prominent acts from a variety of genres. Pilgrimage is held in late September and takes place at The Park at Harlinsdale. In addition to musical acts, it features children's activities, food, and a marketplace showcasing local crafts. [36]

Pumpkinfest is an annual fundraiser for the Heritage Foundation of Franklin and Williamson County, held on the Saturday before Halloween. The holiday theme is carried through activities including music, children's amusements, local artisans, and food. [38]

Dickens of a Christmas

Dickens of a Christmas is celebrated every second week in December, attracting approximately 50,000 visitors yearly. It takes place in Historic Downtown Franklin. Costumed volunteers masquerade as figures from Charles Dickens' A Christmas Carol. Music and dancing are a big part of the festival, and local school and church musical groups often perform. Victorian cuisine is served to visitors, and an arts and crafts bazaar features prominently in Public Square. [39]

Franklin is an active participant in the Sister Cities program. Sister Cities of Franklin & Williamson County [53] was founded as an outgrowth of Leadership Franklin in March 2002. The City of Franklin has relationships with the following municipalities: