Amelia County is a United States county located just west of Richmond in the Commonwealth of Virginia. The county is included in the Greater Richmond Region, and its county seat is Amelia Courthouse. [1]

Amelia County was created in 1735 from parts of Prince George and Brunswick counties, and it was named in honor of Princess Amelia of Great Britain. Parts of the county were later carved out to create Prince Edward and Nottoway counties. 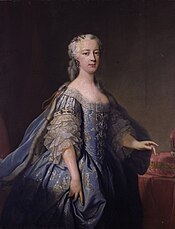 Princess Amelia of Great Britain, for whom the County is named

During the Civil War General Robert E. Lee and his Army spent April 4 and 5, 1865 at Amelia Courthouse before his surrender on April 9 to General Ulysses S. Grant at Appomattox. The last major battle of his army was fought at Sayler's Creek on April 6.

Amelia is known for its minerals, including the nation's best supply of amazonite, a green feldspar found at the Morefield mine. In the 19th century, spas were developed around its mineral springs, which were destinations for travelers.

In 1986 the Amelia County Fair sponsored a competition for the world's largest potato pancake (with apple sauce). It was constructed to raise money that year for the German American National Scholarship Fund. The pancake weighed more than two and one quarter tons and used four truck loads of potatoes.

These are the highways and main roads that go through Amelia County.

The Amelia Bulletin Monitor, a weekly newspaper, has covered the county since 1973.

There are no incorporated communities in Amelia County.