From Wikipedia, the free encyclopedia
U.S. county in Tennessee

The county's second-largest city, Red Boiling Springs, thrived as a mineral springs resort in the late 19th and early 20th centuries. Three hotels from this period– the Donoho Hotel, the Thomas House Hotel (previously the Cloyd Hotel), and the Armour's Hotel (previously the Counts Hotel)– are still open, though only the Armour's still offers mineral water treatments. 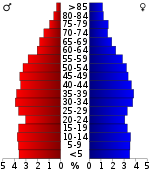 Although part of the Middle Tennessee Grand Division, Macon County is geographically firmly a part of Kentucky’s Pennyroyal Plateau and has much more historically in common with adjacent Bluegrass State counties like Monroe, Clinton and Cumberland, or with counties in East Tennessee. Those Pennyroyal counties were overwhelmingly opposed to secession [15] and a large majority of residents fought their Civil War in Union blue rather than Confederate gray. Consequently, after the Civil War, Macon County became an isolated powerfully Republican County in then-Democratic Middle Tennessee. Since 1884, the only Democratic presidential candidate to carry Macon County has been Bill Clinton in 1992, when he had Tennessee Senator Al Gore – who lived in neighbouring Smith County as a child – as his running mate. In the 2000 election, Gore’s local popularity was sufficient to give him the third-highest Democratic percentage of the past 132 years despite losing the state, but since then like all of Appalachia and surrounding regions the county has shown an extremely rapid trend to the Republican Party due to powerful opposition to the Democratic Party’s liberal views on social issues. [16]

In other statewide elections, Macon County has shown a similar rapid Republican trend. It voted for a Democratic Senator as recently as the 2002 election, when Bob Clement defeated Lamar Alexander by a mere nineteen votes, [17] but for the last three senatorial elections the Democratic candidate has not obtained more than 22.09 percent of the county’s vote. Although Phil Bredesen carried the county in both 2002 and 2006, he is the last Democratic gubernatorial candidate to top thirty percent.

Macon County is part of the Nashville media market.