Elections in Georgia are held to fill various state and federal seats. Georgia regular elections are held every even year. The positions being decided each year varies, as the terms of office varies. The State Senate, State House and U.S. House will typically be up for election, as all of those positions have two-year terms. Special elections are held to fill vacated offices. Georgia is one of seven states that require a run-off election if no candidate receives a majority of the vote in a primary election. [1] Uniquely, Georgia requires a run-off election for state and congressional offices if no candidate wins a majority of the vote in a general election; only Louisiana has a similar requirement, but it operates under a different election system. [2]

Following the end of martial law and readmission to the Union during Reconstruction, Georgia was overwhelmingly dominated by the Democratic Party for a hundred years as did many other states of the Confederacy. White voters often perceived the Republican Party as the party of the North standing for Yankee values, growing industrialisation, and an excessively powerful and interfering federal government all arrayed against their localized agricultural society. The abolition of slavery by amendment to the U.S. Constitution and the legacy of an economy damaged by war and social upheaval led many to bitterly oppose a wide variety of national policies.

Elections to the U.S. Congress during this period saw almost exclusively Democratic senators and either totally or almost-totally Democratic House rule. From 1872 to 2002, Georgia voters consistently elected Democrats as governor and Democratic majorities to the state legislature. Like many other Southern states, the Democratic-controlled legislature established run-off elections for primaries in which no candidate receives more than 50% of the vote. [1]

Historically, elections at all levels of government in the U.S. state of Georgia was dominated by conservative white Democrats in the period between Reconstruction and the end of the New Deal Coalition. For decades, Republicans were a tiny minority, generally associated with Union military victory at the end of the Civil War. Indeed, for several years, the Republicans did not even field a candidate for governor or any other statewide elected office.

Beginning in the 1950s, the credible enforcement of new laws inspired by the Civil Rights Movement began to steadily erode the preponderance of Democrats in elective office in Georgia. The repeal of Jim Crow laws allowed previously disenfranchised African Americans to vote in elections and be active in politics. As many of these people joined with some white Democrats to work for more immediate liberal and pluralistic policies, a growing number of conservative white Democrats who supported either gradual change or none at all either began splitting their tickets at the national level or switching outright to the GOP. The strong showing in Georgia by Republican President Dwight D. Eisenhower in the 1956 presidential race proved to be a turning point. Georgia would remain competitive at the national level for most of the rest of the 20th century. the Republican Party appeared positioned to gain even more ground in the coming years. The Democratic Party did not carry the state from the 1960 election until Jimmy Carter ran for the White House 16 years later.[ citation needed]

Modern times and the shift to Republican dominance

Beginning with Barry Goldwater's presidential bid in 1964, the Republican Party began making inroads in Georgia. The state swung over dramatically to support Goldwater—the first time it had gone Republican in a presidential election in American history. In time, the Republican Party of Georgia would field competitive candidates and win races for seats in the U.S. Senate and U.S. House of Representatives. Republicans also began making gains at the state level, mostly in the Atlanta suburbs. However, conservative Democrats continued to hold most offices at the local level well into the 1990s.

In presidential races, Georgia has given its electoral college votes to the Republican candidate all but four times since 1964: in 1968, segregationist George Wallace won a plurality of Georgia's votes on the American Independent Party ticket; former Georgia Governor Jimmy Carter won his home state by landslide margins in 1976 and 1980 (sweeping every county in the state in 1976); and then- Arkansas Governor Bill Clinton won a plurality of votes in 1992 against incumbent Republican George H. W. Bush and Independent Ross Perot. Republican George W. Bush won Georgia by double digits in 2000 and 2004, with 54.67% and 57.97%, respectively, of the vote, making him the only Republican presidential candidate to carry Georgia twice. In 2008, John McCain won the state by a narrower margin of only 5 points, winning 52% to Democrat Barack Obama's 47%. In 2012, Mitt Romney won the state with 53% to Obama's 45%. In 2016, Donald Trump won the state with 51% to Hillary Clinton's 46%. 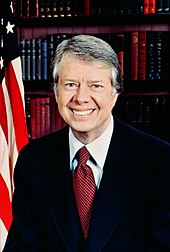 Jimmy Carter, a politician from Plains and a descendant of Confederate veterans who was elected to the Georgia State Senate twice and later served a term as Governor of Georgia, became the 39th President of the United States after winning the election of 1976.

By 2007, conservative Republicans had become the dominant force in state elections, with Republicans holding the offices of governor and lieutenant governor and significant majorities in both houses of the state General Assembly.

As in many states, Democratic strongholds in Georgia include urban and minority-dominated areas. Democrats typically fare well in cities such as Atlanta (and its suburbs such as Gwinnett County), Macon, and Columbus, which have large minority populations, as well as Athens, home of the University of Georgia. The Republican Party dominates state elections through its hold on rural south Georgia, with a very notable exception in the southwestern part of the state; the Appalachian north; and many of Atlanta's further suburbs and exurbs. Former Speaker of the United States House of Representatives Newt Gingrich, co-author of the Contract with America and architect of the 1994 " Republican Revolution," represented a district in Cobb County, a suburban Atlanta county which has since flipped to supporting Democratic candidates since 2016. [5]

The current Governor of Georgia is Brian Kemp, who was elected as a Republican in 2018. The Lieutenant Governor is Geoff Duncan. Other elected state executive officials include Secretary of State Brad Raffensperger, Attorney General Chris Carr, Commissioner of Insurance Jim Beck, and Superintendent of Schools Richard Woods.

The Georgia General Assembly has been controlled by the Republicans since 2004. They have majorities over the Democrats in both the Senate and House of Representatives by margins of 35 to 21 and 105 to 75 respectively as of 2019. In congressional elections, Georgia is now represented in the U.S. Senate by David Perdue and Kelly Loeffler, who are both Republicans, with Loeffler having been appointed by Governor Brian Kemp after Johnny Isakson announced his retirement in 2019. The state also sends 14 members to the U.S. House of Representatives, which in 2019 included 9 Republicans and 5 Democrats.

Raffensperger announced in 2020 that about 1,000 Georgians face investigation for voting twice in primary elections on 9 July. According to him, those voters returned absentee ballots and then showed up at polling places on election day. [6]