From Wikipedia, the free encyclopedia
"Metrolina" redirects here. For other uses, see Metrolina (disambiguation).
Metropolitan area in the United States

The Charlotte metro area is a global financial center, transportation hub, and entertainment destination. Charlotte is the second largest financial hub in the United States behind New York City, being the headquarters for Bank of America and Truist Financial as well as housing the East Coast headquarters and largest employment hub of Wells Fargo. Other Fortune 500 companies headquartered in the metro area include Duke Energy, Honeywell, Lowe's, and Nucor. The Charlotte metro area is the largest manufacturing region in the Carolinas. The estimated gross metropolitan product (GMP) of the metro area is over $170 billion. [5] Located in Mecklenburg County, Charlotte Douglas International Airport is the sixth-largest airport in the world by aircraft movements and the city's location at the junction of I-85 and I-77 makes it a highway logistics center. The Charlotte metro is also the center of American auto racing and is home to the Carolina Panthers, Charlotte Hornets, and Charlotte FC.

The Charlotte metro is home to a number of prominent higher education institutions, including the University of North Carolina at Charlotte, Queens University of Charlotte, Davidson College, Belmont Abbey College, and many more. The primary community college for the area is Central Piedmont Community College, which has several campuses throughout Charlotte and the surrounding region.

The regional area around the city was at one time called Metrolina, a portmanteau of Metropolis and Carolina. The term has fallen out of widespread general use, though it still maintains a presence and is used by the North Carolina Department of Transportation. The term does retain a marketing value, and is thus also used by many businesses in the area. Metrolina refers to the region that includes the cities of Charlotte, Concord, Gastonia and Rock Hill. The name Metrolina came into fashion when North Carolina's other two large metropolitan areas took on nicknames—the Triangle for Raleigh/ Durham/ Cary/ Chapel Hill and the Triad for Greensboro/ Winston-Salem/ High Point. (The Triad now goes by the name Piedmont Triad to distinguish it from other tri-cities.)

Charlotte's most common nickname is the Queen City, often abbreviated as Q.C., a name derived from the city's namesake, Queen Charlotte of Mecklenburg-Strelitz.

The term "Charlotte USA" referred to the 16-county region, which includes 12 counties in North Carolina and 4 counties in South Carolina. The term was championed during a marketing campaign by the Charlotte Regional Partnership, a non-profit organization made up of both private- and public-sector members from throughout the Charlotte region. This organization represents one of seven officially designated economic development regions in North Carolina. [6]

Region J of the North Carolina Councils of Government, of which a majority of the Charlotte area municipalities and counties belong, uses the term Centralina in its body's name, Centralina Council of Governments. This term, however, is used only sparingly among locals.

The Charlotte Regional Partnership also identifies four additional counties to the what they refer to as the 'Charlotte Region'- Alexander, Anson and Catawba counties in North Carolina, and Chesterfield County, South Carolina. Catawba and Alexander counties are currently part of the Hickory–Lenoir–Morganton Metropolitan Statistical Area or ' The Unifour', and Anson County was once part of the MSA and CSA, until it was removed in 2011. Factoring in the Unifour, as well as Anson and Chesterfield counties, if one considers these regions to be part of the Charlotte area, as many in the area regard them as such, the population according to 2018 Census estimates, increases to 3,190,390. If this population was officially used, the Charlotte Area would become the 20th largest CSA, overtaking the St. Louis, Missouri area, and placing it behind Portland, Oregon.

Suburban towns and cities under 5,000 in population

Changes in house prices for the area are publicly tracked on a regular basis using the Case–Shiller index; the statistic is published by Standard & Poor's and is also a component of the S&P 20-city composite index of the value of the U.S. residential real estate market.

The Charlotte Area Transit System (CATS) is the mass transit agency that operates local, express, bus rapid services that serves Charlotte and its immediate suburban communities in both North and South Carolina. CATS also operates light rail and streetcar lines. CATS is also building a commuter, light rail, streetcar network as a supplement to its established bus transit throughout the region. The LYNX Blue Line runs from Interstate 485, through SouthEnd, Uptown Charlotte, to the University of North Carolina at Charlotte. Plans are for it to stretch initially to Mooresville, Pineville, and Matthews. Charlotte-Douglas International Airport will be connected to the system by light rail.

The Charlotte region is also served by 2 major interstate highways ( I-85 and I-77), and their 2 spurs ( I-277, and I-485). I-40 also passes through the center of Iredell County, which is the northern region of the Charlotte metro. Other major freeways include Independence Boulevard (east Charlotte to I-277), a portion of US 321 between Hickory and Gastonia, and Monroe Connector / Bypass, each projected to cost over $1 billion per project.

Other important US highways in the region include: US 74 (east to Wilmington, west to Asheville and Chattanooga), US 52 (through the far eastern part of the region), US 321 (through Chester, York, Gastonia, Dallas, Lincolnton and Hickory), US 601 (passing east of Charlotte) and US 70 (through Salisbury, Statesville and Hickory).

Charlotte Douglas International Airport is the main airport in the Charlotte area and the 6th busiest in the country. In April 2007, Charlotte was the fastest growing airport in the US. [13] The airport went on to surpass its sister US Airways hub in Philadelphia, Pennsylvania as one of the 30 busiest airports in the world in terms of passenger traffic.[ citation needed] A new terminal to the northwest of the center of the airport will be built in the near future, possibly as a Caribbean/Latin America international terminal. CLT is also supplemented by regional airports in Concord, Gastonia, Hickory, Monroe, Statesville, in North Carolina, as well as Rock Hill in South Carolina.

The foothills of the Blue Ridge Mountains begin along the western edge of the region; the descent (the Fall Line) to the coastal plain begins along the eastern edge. Amid this varied topography, the Daniel Stowe Botanical Garden and several state parks (Morrow Mountain, Crowders Mountain, South Mountains, Duke Power, Landsford Canal, Andrew Jackson) offer recreational possibilities, along with the Uwharrie National Forest just east and northeast of Albemarle, and the Sumter National Forest at the southwest corner of the area. Kings Mountain National Military Park is partially located in York County and in Cherokee County near Blacksburg, South Carolina. 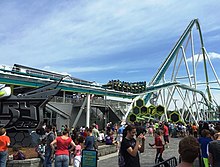 Other places of interest in the surrounding area include the Schiele Museum (in Gastonia), Charlotte Motor Speedway (in Concord), the Carolina Raptor Center (in Huntersville), Daniel Stowe Botanical Garden (in Belmont), Latta Plantation (in Huntersville), Brattonsville Historic District (in McConnells), the North Carolina Transportation Museum (in Spencer), Fort Dobbs historical site (in Statesville), Catawba County Firefighters Museum (in Conover), the Arts & Science Center of Catawba Valley/Millholland Planetarium (in Hickory) the Museum of York County (in Rock Hill), James K. Polk historical site (in Pineville), the Catawba Cultural Center (in York County), the Museum of the Waxhaws (in Waxhaw), Glencairn Gardens (in Rock Hill), and the Reed Gold Mine (in Locust).

The PNC Music Pavilion is located in the University City area of Charlotte. The performing arts amphitheatre has hosted many popular music concerts. The U.S. National Whitewater Center (USNWC) is the world's premier outdoor recreation and environmental education center. Alongside mountain-biking and running trails, a climbing center, and challenge course, the park's unique feature is a multiple-channel, customized whitewater river for rafting and canoe/kayak enthusiasts of all abilities.

The USNWC is only 10 minutes from downtown Charlotte and provides roughly 400 acres (1.6 km2) of woodlands along the scenic Catawba River. Olympic-caliber athletes, weekend warriors and casual observers share this world-class sports and training center.

SouthPark Mall is one of the Southern United States' most upscale malls, including stores such as Louis Vuitton, Tiffany & Co., Burberry, Hermès, Neiman Marcus, and American Girl. SouthPark mall is also the largest mall in the Carolinas and one of the most-profitable malls in the United States.

Concord Mills is unique in that it does not feature the typical anchor stores found at other malls; it focuses more on attracting outlet store tenants. The mall is visited by over 15 million annually.

Alongside enclosed malls and strip centers are several other shopping districts. Several downtowns can claim an abundance of shopping options, along with restaurants and other entertainment, and a few other specific districts have emerged: Central Avenue, especially in the Plaza-Midwood area; the NoDa area of North Charlotte; and the Arboretum in southeast Charlotte (geographically, south), to offer a handful of examples. Several of these areas are at the center of the area's growing immigrant business communities.

Bank of America Stadium, home of the Carolina Panthers

In addition to Charlotte Motor Speedway, there are plenty of other sports venues, including the BB&T Ballpark (home of the Charlotte Knights, the Triple-A affiliate of the Chicago White Sox), Bank of America Stadium (home of the NFL's Carolina Panthers and the MLS's Charlotte MLS team), and Spectrum Center (home of the NBA's Charlotte Hornets, and the American Hockey League's Charlotte Checkers). The Charlotte Eagles of the United Soccer Leagues call the area home, and the Kannapolis Intimidators and Hickory Crawdads are Single-A Minor-League Baseball teams located in this region. 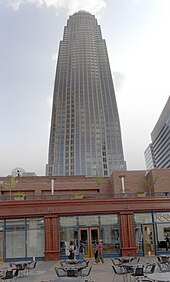 Reflections Studios in Charlotte played an important role in the emergent late-20th-century American musical underground – R.E.M., Pylon, Let's Active, Don Dixon and Charlotte's Fetchin Bones (among many others) all recorded influential and acclaimed albums there. Charlotte-based Ripete and Surfside Records maintain important catalogs of regional soul and beach music, and the area has also played a role in the history of gospel, bluegrass and country music. The Milestone, one of the first punk clubs in the South, is located in west Charlotte, and in the past hosted legendary appearances from the likes of R.E.M., Black Flag, Nirvana, The Minutemen, D.O.A., Bad Brains, Charlotte's Antiseen, and many others.