Virginia is bordered by Maryland and Washington, D.C. to the north and east; by the Atlantic Ocean to the east; by North Carolina and Tennessee to the south; by Kentucky to the west; and by West Virginia to the north and west. Due to a peculiarity of Virginia's original charter, its boundary with Maryland and Washington, D.C. does not extend past the low-water mark of the south shore of the Potomac River (unlike many boundaries that split a river down the middle). [3] The southern border is defined as the 36° 30′ parallel north, though surveyor error led to deviations of as much as three arcminutes. [4]

Geologically, Virginia is divided into five regions, [5] while the EPA lists seven ecoregions with further precision. From east to west, the regions are as follows:

The Chesapeake Bay separates the contiguous portion of the Commonwealth from the two-county peninsula of Virginia's Eastern Shore. The bay was formed following a meteoroid impact crater during the Eocene. [6] Many of Virginia's rivers flow into the Chesapeake Bay, including the Potomac, Rappahannock, James, and York, which create three peninsulas in the bay. [7] [8] 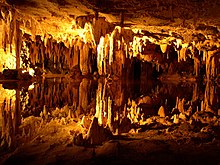 Reflecting Lake in Luray Caverns in the northern Shenendoah valley

Coal mining takes place in the three mountainous regions at 40 distinct coal beds near Mesozoic basins. [15] Besides coal, resources such as slate, kyanite, sand, and gravel are mined, with an annual value over $2 billion as of 2006 [update]. [16]

Virginia has a low risk on earthquakes,[ citation needed] especially in the northern part of the state. The Virginia seismic zone has not had a history of regular earthquake activity. Earthquakes are rarely above 4.5 in magnitude because Virginia is located centrally on the North American Plate, far from plate boundaries. Locations near tectonic plates suffer earthquakes frequently. The largest recorded earthquake, at an estimated 5.9 magnitude, was in 1897 near Blacksburg. [17] The largest since then was in August 2011, when a 5.8 magnitude quake struck near Mineral, Virginia and was felt moderately to strongly throughout the state.[ citation needed]

The lower altitudes are more likely to have small but dense stands of moisture-loving hemlocks and mosses in abundance, with hickory and oak in the Blue Ridge. [18] However, since the early 1990s, Gypsy moth infestations have eroded the dominance of oak forests. [20] Other common trees and plants include chestnut, maple, tulip poplar, mountain laurel, milkweed, daisies, and many species of ferns. The largest areas of wilderness are along the Atlantic coast and in the western mountains, which are likely home to the largest populations of trillium wildflowers in North America. [18] [21]

Cannon at the Fredericksburg and Spotsylvania National Military Park

Virginia has 30 National Park Service units, such as Great Falls Park and the Appalachian Trail, and one national park, the Shenandoah National Park. [26] Shenandoah was established in 1935. Almost 40% of the park's area (79,579 acres/322 km2) has been designated as wilderness under the National Wilderness Preservation System. [27] Parkways, such as the George Washington Memorial Parkway and the Blue Ridge Parkway, which encompasses the scenic Skyline Drive, are among the most visited national park service sites nationwide. [28]

Additionally, there are 34 Virginia state parks and 17 state forests, run by the Department of Conservation and Recreation and the Department of Forestry. [2] [29] The Chesapeake Bay, while not a national park, is protected by both state and federal legislation, and the jointly run Chesapeake Bay Program which conducts restoration on the bay and its watershed. The Great Dismal Swamp National Wildlife Refuge extends into North Carolina. [30] Several open-air museums and battlefields are located in the state, such as Colonial Williamsburg, Richmond National Battlefield, and Fredericksburg and Spotsylvania National Military Park. [31]

As of March 26, 2010, there were 31 Superfund sites in Virginia on the National Priorities List, as designated under the Comprehensive Environmental Response, Compensation, and Liability Act (CERCLA) environmental law. No additional sites are currently proposed for entry on the list. Four sites have been cleaned up and removed from the list. [32]