Long Beach is a city (incorporated August 10, 1905) located in Harrison County, Mississippi, United States. It is part of the Gulfport– Biloxi Metropolitan Statistical Area. As of the 2010 census, the city had a population of 14,792. [3]

Long Beach (map center) is east of Pass Christian and west of Gulfport, along the Gulf of Mexico

There were 6,560 households out of which 36.2% have children under the age of 18 living with them, 53.8% were married couples living together, 13.5% have a female householder with no husband present, and 28.4% were non-families. 22.9% of all households were made up of individuals and 7.7% had someone living alone who is 65 years of age or older. The average household size was 2.61 and the average family size is 3.07.

Long Beach High has a long-standing tradition of excellence. It offers rigorous academics including college preparatory classes, advanced placement classes and award-winning vocational classes. In 2007 Long Beach High School was named a National Blue Ribbon School by the U.S. Department of Education, making it one of four schools in Mississippi and one of about 273 private and public schools in the United States to receive this honor.

The Gulf Coast campus of the University of Southern Mississippi is located in Long Beach along Beach Boulevard. The Friendship Oak tree is located on the front lawn of the Southern Miss Gulf Park campus.

Long Beach began as an agricultural town, based around its radish industry. But on August 10, 1905, Long Beach incorporated and became another city on the Mississippi Gulf Coast. As the years went on, the city moved from its agricultural heritage and moved toward tourism with the beach and high-rise condominiums becoming increasingly popular.

"The Radish capital of the world"

A productive truck farming town in the early 20th century, citizens of Long Beach proclaimed the city to be the " Radish Capital of the World". The city was especially known for its cultivation of the Long Red radish variety, a favorite beer hall staple in the northern US at the time. In 1921, a bumper crop resulted in the shipment of over 300 train loads of Long Beach's Long Red radishes to northern states. [8] [9]

Eventually, the Long Red radishes for which Long Beach was known fell into disfavor, and the rise of the common button radish caused a dramatic decline in the cultivation of this crop in the area. [7] 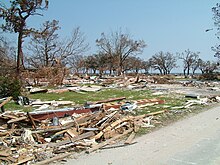 The impact of Hurricane Katrina on the Long Beach shoreline

Nineteen days following the city's centennial, Hurricane Katrina struck the city on August 29, 2005, destroying almost all buildings within 500 meters (1,600 ft) of the Gulf of Mexico shoreline.[ failed verification] Many Long Beach residents were left homeless or living in water and or wind damaged houses. At least one person was confirmed dead. [10]

The city of Long Beach, California, held a fund raiser to help its eponymous relative. [11] The city of Peoria, Arizona, adopted Long Beach and provided both public and private resources. This resulted in a close relationship between the two communities.[ citation needed]

Today, the city is still recovering from Hurricane Katrina. Residents are returning as beaches and condominiums in the area are being repaired. However, the city has not seen a return of business to pre-Katrina levels due in part to building codes on the beach established by the Federal Emergency Management Agency and Mississippi Emergency Management Agency and to the economic downturn.