From Wikipedia, the free encyclopedia
For the county in Australia, see Bland County, New South Wales.
U.S. county in Virginia

Bland County is a United States county located in the southwestern portion of the Commonwealth of Virginia. Like most of Southwestern Virginia, it is part of the Appalachian region. The county seat is the unincorporated village of Bland. [1]

Bland County was created in 1861 from parts of Wythe, Tazewell, and Giles counties in Virginia. The new county was named in honor of Richard Bland, a Virginia statesman who served in the House of Burgesses and the Continental Congress.

As of the 2010 census, the county population was 6,824, making it the sixth least populated county in Virginia. [2] Bland County is also one of the few counties in the United States that do not contain any incorporated municipalities. 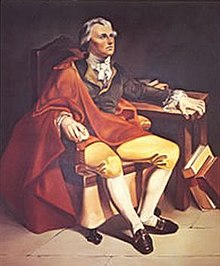 Richard Bland, for whom the county was named

The push to create Bland County resulted from popular dissatisfaction with the distances required to travel to the various county seats in the area. The distances and the difficult mountain trails created a significant hardship for those needing to conduct legal affairs. In addition, the growing population resented paying taxes for benefits outside of the local area. This pressure eventually persuaded the Virginia General Assembly to take action to form a new county in the southwestern portion of the state. [3]

Bland County was officially formed on March 30, 1861 from parts of Wythe, Tazewell, and Giles counties. Additional land from Giles County was added later. The county was named after Richard Bland, a Virginia statesman and political figure who helped lead the struggle for freedom and independence from England. [4]

The North Fork of the Holston River has its head waters in Bland County.

The county is a historically Republican county. The only Democrats who have carried it since 1910 have been Woodrow Wilson in 1912 when the Republican Party was split between William Howard Taft and Theodore Roosevelt, Franklin D. Roosevelt in each of his four elections, and Lyndon B. Johnson in 1964. All in national Democratic blowouts.