Warren County is a county located in the U.S. state of Mississippi. As of the 2010 census, the population was 48,773. [1] Its county seat is Vicksburg. [2] Created by legislative act of 22 December 1809, Warren County is named for American Revolutionary War officer Joseph Warren.

The county exists in two sections, connected only by a narrow 500ft wide section between Madison Parish, Louisiana and Issaquena County, Mississippi along the delta of the Yazoo River. This area was once along the Mississippi River, but has since become an oxbow lake and marsh and no roads traverse this strip of land. 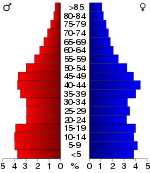 2005 census estimates based on the American Community Survey suggested that non-Hispanic whites were 51.5% of Warren County's population. Warren County was the only county in Mississippi along the Mississippi River, in addition to Desoto, where whites made up a majority of the population. African Americans were 46.0% of the county's population. People identifying as of two or more races were 0.6%, less than in the previous ACS. The Latino population was 1.2% of the total for the county. [11]

Warren County has the seventh highest per capita income in the State of Mississippi.

Members are elected from each of the five supervisory districts. The Board of Supervisors guides and establishes policies for the county government. Members of the board of make decisions regarding economic development, public health and welfare and county roads.

In 2004, Republican George W. Bush won Warren County with 57% percent of the vote to Democrat John Kerry's 41%. In 2008, however, the results were much closer based in part on a strong Democratic voter registration campaign. Republican John McCain defeated Democrat Barack Obama 51% to 48%. In 2012, Barack Obama won the county 50% to Mitt Romney's 49%, the first Democratic presidential candidate to take the county since 1960. The previous Democratic dominance was based on membership in the party by conservative whites, at a time when most blacks were excluded from voting. Since the late 20th century and passage of civil rights legislation, most conservative whites have shifted into the Republican Party. African Americans have largely supported local and national Democratic candidates since that period.

The Warren County sheriff's department is located in an annex building across from the courthouse.

The Warren County Board of Supervisors meets in this mall building in Vicksburg.

Old Courthouse Museum, also known as the Eva W. Davis Memorial is located in Vicksburg across the street from the 1940 courthouse.