From Wikipedia, the free encyclopedia
U.S. county in Tennessee

Perry County is served by Perry County Airport near Linden. Mousetail Landing State Park is located in the county.

Perry County was formed in 1819 from parts of Humphreys and Hickman counties. It is named in honor of Oliver Hazard Perry (1785–1819), American War of 1812 naval officer who, after his flagship was severely damaged, continued the fight from another ship and forced the surrender of the British fleet at the Battle of Lake Erie. [1] Decatur County was formed from the portions of Perry County west of the Tennessee River. The first settlements in the county were along Toms Creek near the Tennessee River, with the first known birth in the area occurring in 1818. This is the first written date involving the area that would become Perry County, but it is evident that the area had some European permanent settlement prior to this. [4] The seat of government and courts were originally located in a small town known as Harrisburg approximately 4 miles (6.4 km) south of the current seat of Linden. The county seat was transferred to its current location in Linden in 1848, where the current courthouse stands today. Harrisburg no longer exists as a municipal entity or recognized location. [1]

Perry County was severely impacted by the economic recession of 2008 and 2009. Unemployment reached 27%, making it the highest in the state of Tennessee, and one of the highest in the United States. The massive amount of unemployment was due to the closure of a major automotive parts plant that employed a significant portion of the county's residents. [5] 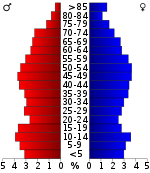 Perry County has the lowest population density of any county in Tennessee. [14]

Historically, like most of Middle Tennessee, Perry County was overwhelmingly Democratic. It did vote for Warren G. Harding in his record popular vote landslide of 1920, but otherwise no Republican Presidential candidate managed to carry the county up to 2004. It did, though, give a plurality to segregationist Alabama Governor George Wallace in 1968, but became one of only six Wallace counties [a] to vote for George McGovern against Richard Nixon’s 3,000-plus-county landslide of 1972.

Since 2000, Perry County has seen a very rapid trend towards the Republican Party. [15] In 2016, indeed, this historically Democratic county was only marginally less Republican than traditional Unionist Republican bastions of East Tennessee.