From Wikipedia, the free encyclopedia
This article is about the Virginia county formed in 1807. For the county formed in 1784 which is now part of Kentucky, see Nelson County, Kentucky.
U.S. county in Virginia

Nelson County is a county located in the Commonwealth of Virginia. As of the 2010 census, the population was 15,020. [2] Its county seat is Lovingston. [3] Nelson County is part of the Charlottesville, VA Metropolitan Statistical Area. Nelson County is home to Wintergreen Resort, a local ski area; Swannanoa mansion and is the location of Walton's Mountain made famous by the television show, The Waltons. Nelson County is also home to ten wineries, five craft breweries, two cideries, two distilleries, many fruit orchards and Crabtree Falls.

At the time the English began settling Virginia in the 1600s, the inhabitants of what is now Nelson County were a Siouan-speaking tribe called the Nahyssan. They were probably connected to the Manahoac. [4]

Nelson County was created in 1807 from Amherst County. The government was formed the following year. [5] The county is named for Thomas Nelson, Jr., a signer of the U.S. Declaration of Independence, who served as Governor of Virginia in 1781. An earlier Virginia county, also named in his honor, became part of Kentucky when it separated from Virginia in 1792.

On the night of August 19–20, 1969, Nelson County was struck by disastrous flooding caused by Hurricane Camille. The hurricane hit the Gulf Coast two days earlier, weakened over land, and stalled on the eastern side of the Blue Ridge Mountains, dumping a world record quantity of 27 inches (690 mm) of rain, mainly in a three-hour period. Over five hours, it yielded more than 37 inches (940 mm), while the previous day had seen a deluge of 5 inches (130 mm) in half an hour, with the ground already saturated. There were reports of animals drowning in trees and people who had had to cup their hands around their mouth and nose to breathe. [6] 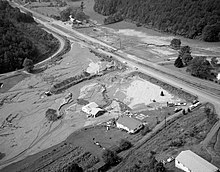 Mudslide damage in Nelson County after the passage of Hurricane Camille

Flash floods and mudslides killed 153 people, 31 from Roseland, Tyro, and Massies Mill alone. [7] Over 133 public bridges were washed out in Nelson County, while some communities were under water. [8] In the tiny community of Davis Creek, 52 people were killed or could not be found; only 3 of 35 homes were left standing after the floodwaters receded. [7] The bodies of some people have never been found; others washed as much as 25 miles (40 km) downstream along the creeks and rivers. The entire county was virtually cut off, with many roads and virtually all bridges, telephone, radio/TV, and electric service interrupted.

The waters of the Tye, Piney, Buffalo, and Rockfish rivers flow into the James River. There was massive flooding elsewhere in Virginia, such as along the Maury River, which destroyed the town of Glasgow in Rockbridge County.

The James River and its tributaries normally drain Nelson County, but in the face of massive flooding from other tributaries such as Hatt Creek (along the James River some 80 miles (130 km) to the east) the James River crested more than 20 feet (6.1 m) above flood stage at Westham, as Nelson County citizens watched portions of houses and other buildings, bodies, and dead livestock flow past. Just a few miles further downstream, the James River crested at the City Locks in Richmond at 28.6 feet (8.7 m) swamping downtown areas and also flooding a substantial portion of South Richmond (formerly the separate city of Manchester [9]). The Hurricane Camille disaster did over $140 million (in 1969 dollars) in damage across Virginia, however in no other place in Virginia was the storm as devastating and deadly as in Nelson County, where one percent of the population was killed and where many bodies were never recovered. 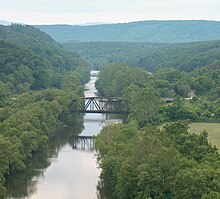 The Tye River flows through the mountains and low hills of Nelson County.

According to the U.S. Census Bureau, the county has a total area of 474 square miles (1,230 km2), of which 471 square miles (1,220 km2) is land and 3.5 square miles (9.1 km2) (0.7%) is water. [10] The Blue Ridge Mountains form the northwest boundary of the county; the James River forms the boundary to the southeast. Internally, Nelson consists of the Rockfish, Tye and Piney rivers, along with many known creeks. 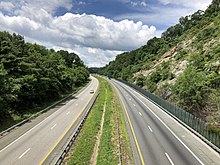 I-64 in Nelson County

Jefferson-Madison Regional Library is the regional library system that provides services to the citizens of Nelson.

There were 6,396 households out of which 21.6% had children under the age of 18 living with them, 51.6% were married couples living together, 11.1% had a female householder with no husband present, and 32.7% were non-families. 27.4% of all households were made up of individuals and 11.1% had someone living alone who was 65 years of age or older. The average household size was 2.33 and the average family size was 2.81. 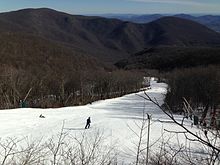 A view down a ski slope at Wintergreen Resort, Nelson County, Virginia

The Wintergreen Resort near Nellysford opened in 1975. A planned development begun in 1969, it offers 45 holes of championship golf; seasonal skiing, snowboarding and snowtubing. On the eastern slope of the Blue Ridge, Wintergreen is a "top down" resort in which practically all of the amenities are built on the peaks and ridges, rather than at the base like a traditional ski resort. [16]

Fishing and camping are popular activities in Nelson County. Sections of the Tye River are also popular for whitewater boating with canoes and kayaks. The rapids are rated Class I to Class II+. Depending upon water conditions some rapids on the Tye River can approach class III. [19]

The first annual Lockn' Music Festival was held September 5–8, 2013 on a farm in Nelson County near Arrington, Virginia. [20]

Camp Jeep was held at the Oak Ridge Estate in Arrington for several years beginning in 1999 with the last event taking place in 2007. [21]

There are no cities or incorporated towns in Nelson County. It consists of unincorporated communities including census-designated places (CDPs). 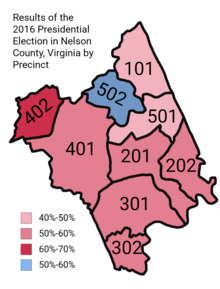 Map showing the results of the 2016 presidential election in Nelson County, Virginia by Precinct.

Nelson County is very competitive in presidential elections. The last time any candidate broke 55% of the vote was 1984, when Ronald Reagan carried the county in his 49-state landslide. It has also voted for the winner every time since 1984 except for 2004, when John Kerry won by 4 votes.