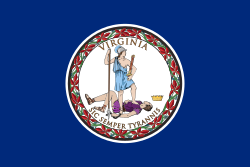 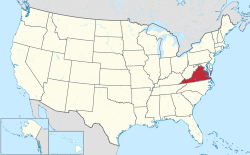 Location of Virginia in the U.S. map

This is a list of notable people who were born in the U.S. state of Virginia, were raised or lived in Virginia, or for whom Virginia is a significant part of their identity. Those not born in Virginia are marked with §.

This is a dynamic list and may never be able to satisfy particular standards for completeness. You can help by expanding it with reliably sourced entries.
Contents: