Moss Point is a city in Jackson County, Mississippi, United States. The population was 13,704 at the 2010 census, [3] down from 17,653 at the 2000 census. On August 29, 2005, Moss Point was hit by the strong east side of Hurricane Katrina, and much of the city was flooded or destroyed (see details below). Moss Point is home to Trent Lott International Airport and the Mississippi Export Railroad.

U.S. Route 90 forms the southeast boundary of Moss Point, leading southwest into Pascagoula and northeast to Interstate 10, which runs through the northern part of the Moss Point city limits. I-10 leads west 22 miles (35 km) to the Biloxi area and northeast 36 miles (58 km) to Mobile, Alabama. Mississippi Highways 63 and 613 (Main Street) are north–south roads through Moss Point. Highway 63 leads south to US-90 and north 38 miles (61 km) to Lucedale, while Highway 613 leads south 4 miles (6 km) to the center of Pascagoula and north 5 miles (8 km) to Escatawpa. 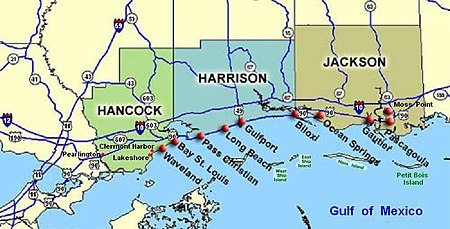 Moss Point (right edge) is north of Pascagoula, on Mississippi Highway 63, north of the Gulf of Mexico.

The city is served by the Moss Point School District.

On August 29, 2005, Moss Point was hit by the strong eastern side of Hurricane Katrina, when it passed 30 miles (48 km) east of central New Orleans with minimal gale-force winds. However, on the east side of Hurricane Katrina, much of Moss Point was flooded or destroyed in one day, by the strong hurricane-force winds which lasted several hours and a storm surge exceeding 20 feet (6.1 m) in some sections. [5]

In the wake of Hurricane Katrina, Burlington, Vermont, became the sister city of Moss Point and provided much-needed aid to the city. [6]