From Wikipedia, the free encyclopedia
Not to be confused with King William County, Virginia.
County in Virginia

Prince William County is located on the Potomac River in the Commonwealth of Virginia in the United States. As of the 2010 census, the population was 402,002, [2] on July 1, 2019, the population was estimated to be 470,335, [1] making it Virginia's second-most populous county. Its county seat is the independent city of Manassas. [3]

A part of Northern Virginia, Prince William County is part of the Washington metropolitan area. In 2019 it had the 20th highest income of any county in the United States. [4] 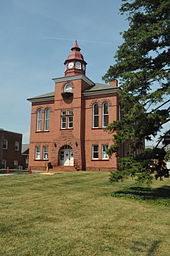 At the time of European colonization, the native tribes of the area that would become Prince William County were the Doeg, an Algonquian-speaking sub-group of the Powhatan tribal confederation. When John Smith and other English explorers ventured to the upper Potomac River beginning in 1608, they recorded the name of a village the Doeg inhabited as Pemacocack (meaning "plenty of fish" in their language). It was located on the west bank of the Potomac River about 30 miles south of present-day Alexandria. [5] Unable to deal with European diseases and firepower, the Doeg abandoned their villages in the area by 1700. [6]

As population increased in the area, Prince William County was created by an act of the General Assembly of the colony of Virginia in 1731; it was organized largely from the western section of Stafford County as well as a section of King George County. [7] The area encompassed by the act creating Prince William County originally included all of what later became the counties of Arlington, Fairfax, Fauquier, and Loudoun; and the independent cities of Alexandria, Fairfax, Falls Church, Manassas, and Manassas Park. These later became independent jurisdictions. The county was named for Prince William, Duke of Cumberland, the third son of King George II. [8]

In 1790 the population of the county was 58% white; most of the remainder were enslaved African Americans. The county had been an area of tobacco plantations, but planters were changing to cultivate mixed crops due to soil exhaustion and changes in the market. In the first two decades after the Revolution, the number and percentage of free blacks increased in Virginia as some whites freed their slaves, based on revolutionary ideals.

On March 19, 1892, two men, Lee Heflin and Joseph Dye, were lynched in Haymarket. They had been convicted of the murder of a girl and sentenced to death, but the mob did not want to wait for the legal system. The men were hanged from trees at the edge of woods; then the mob shot into their bodies. The Washington Post said, "mob law...is a dangerous thing to encourage. There is too much of it already throughout the country, and it spreads like a contagion so long as public sentiment tacitly approves it." [10] It was unusual that white men were lynched; in Virginia and the rest of the South, black men were overwhelmingly the victims of lynching, the violence by which whites maintained dominance. [11] [12] [13]

The county was rural and agricultural for decades. Into the early 20th century, the population was concentrated in two areas, one at Manassas (site of a major railroad junction), and the other near Occoquan and Woodbridge along the Potomac River, which was an important transportation route. Beginning in the late 1930s, suburban residential development began and new housing was developed near the existing population centers, particularly in Manassas.

In 1960 the population was 50,164. Continued suburbanization and growth of the Washington, D.C. metropolitan area caused that to increase rapidly in the following decades. There was expansion of federal, military and commercial activities in Northern Virginia in the late 20th century. By 2000, this was the third-most populous local jurisdiction in Virginia. From 2000 to 2010, the population increased by 43.2%. This was the first county in Virginia to be minority-majority: the new majority is composed of Hispanic (of any race, largely of Central and South American ancestry), African American, and Asian. [14] In 2012 it was the seventh-wealthiest county in the country. [15] The estimated population of 2014 is more than 437,000.

In 1994 The Walt Disney Company bought extensive amounts of land in Haymarket for a proposed Disney's America theme park. [16] Local resistance to the resort, because of its perceived adverse effects on the historic Manassas Battlefield, led to its end as a viable idea. [17] William B. Snyder, a local business man convinced Disney to sell the property to him. [18] Snyder, in turn, sold off most of the land to developers, except for the 405 acres (1.64 km2) donated to the National Capital Area Council of the Boy Scouts, who used the land to create Camp Snyder for Cub Scouts. [19]

The Marine Corps Heritage Museum and the Hylton Performing Arts Center opened in the 21st century. The American Wartime Museum is also to be located in this county. During the commemoration of the Sesquicentennial of the Civil War, re-enactment of the famous First and Second Battles of Manassas was planned. 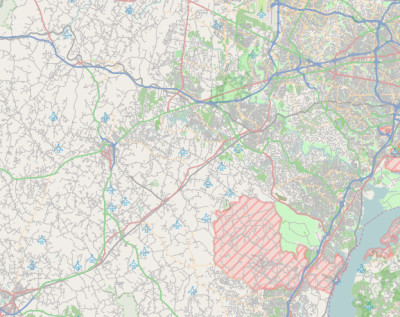 The Bureau of Economic Analysis combines the independent cities of Manassas and Manassas Park with Prince William County (within which the two cities are enclaves) for statistical purposes:

The County is divided into seven magisterial districts: Brentsville, Coles, Potomac, Gainesville, Neabsco, Occoquan, and Woodbridge. The magisterial districts each elect one supervisor to the Board of Supervisors which governs Prince William County. There is also a chairman elected by the county at-large, bringing total board membership to 8. A vice-chairman is selected by the board from among its membership. The county operates under the county form of the county executive system of government, with an elected Board of Supervisors. The board appoints a professional, nonpartisan county executive to manage operations of government agencies.

Republicans formerly held six of the eight Virginia House of Delegates seats that include parts of the county, with that delegation having consisted Robert G. Marshall, Scott Lingamfelter, Tim Hugo, Jackson Miller, Rich Anderson, and Mark Dudenhefer. In the 2017 legislative election, which saw the Democrats cut a Republican majority in the House of Delegates from 66 to 51, Prince William County saw its number of Republican Delegates be reduced from six to one, with Tim Hugo being the sole Republican to represent the county. Marshall, Lingamfelter, Miller, and Anderson all ran for reelection and were defeated by Democratic challengers Danica Roem, Elizabeth Guzmán, Lee Carter, and Hala Ayala respectively. Dudenhefer opted to retire and instead successfully ran for a seat on the Stafford County Board of Supervisors, and he was replaced by Democrat Jennifer Carroll Foy. Democrats Luke Torian and John Bell were already representing the county in the House at the time of the 2017 elections, and with the addition of the five newcomers, Democrats held seven of the eight House seats that include parts of Prince William County. Hugo was then defeated in the 2019 election by Democrat Dan Helmer and Democrats now hold all eight House seats .

Four of the five Virginia State Senate seats that include parts of the county are held by Democrats, including Democratic Sen. Jeremy Mc Pike, the President pro tempore of the Senate, Toddy Puller, George Barker and John Bell. Republican Richard Stuart also represents portions of the county.

In 2005, Democratic Gubernatorial candidate Tim Kaine won the county with 49.95% of the vote.

Republicans hold one of the three U.S. Congressional seats ( VA-1) that include parts of Prince William County. In 2006, Democratic U.S. Senator candidate Jim Webb carried the county with 50.51% of the vote.

In the 2008 United States presidential election, Democrat Barack Obama carried Prince William with 57.51% of the vote, compared to Republican John McCain who received 41.62%. Obama's final rally the night before the election was held at the Prince William County Fairgrounds, just outside the city of Manassas. [21] He was the first Democrat to carry the county since 1964.

Continuing demographic changes in the county, such as an increasingly diverse and urbanized population, were cited by The New York Times as contributing to Obama's success in the 2012 United States presidential election and suggesting the future appeal of the Democratic Party in the United States. Between 2000 and 2010, county population had increased by 121,189 persons (43.2%). [14] It had changed from a primarily white, rural county. Prince William by 2012 had an educated professional population with the seventh-highest income in the country; it is the first county in Virginia to be composed of a majority of minorities: Hispanic, African American, and Asian. Obama and the Democrats attracted their votes. [15] Time identified Prince William as one of five critical counties in Virginia for the election. Obama defeated Romney soundly by 15 percentage points with a margin of 57%–42%, [22] narrowly beating his 2008 margin.

The county continued its trend toward Democratic candidates in the 2016 United States presidential election, Prince William County voted 57.6% for Hillary Clinton to Trump's 36.5%. Clinton's victory represented the largest margin of victory for any presidential candidate in the county since 1988.

According to the County's 2013 Comprehensive Annual Financial Report, [24] the top employers in the county are:

Also according to census figures, there were 130,785 households in Prince William County as of April 1, 2010. According to the Census Bureau's 2009 American Community Survey, [32] 76.1% of the County's households are occupied by families, (compared to 66.5% in the United States). This represents a decrease of 4.6 percentage points since 1990, when 80.7% of households in the County were families. Approximately 42.2% of Prince William County's households are family households occupied by parents with their own children under 18 years of age.

The Potomac Nationals were a Minor League Baseball team located in Woodbridge, Virginia. The Nationals play in the high-A Carolina League and are an affiliate of the Washington Nationals. The Northern Virginia Royals are an American minor league soccer team, also located in Woodbridge, Virginia. The Royals have minor league affiliation with D.C. United, Washington, D.C. Major League Soccer franchise.

The historic Old Dominion Speedway was located in Manassas. Opened in 1948, it was the location of the first commercial drag race held on the East Coast, and was a stop on the NASCAR Grand National schedule in the late 50s and early 60s. Old Dominion Speedway closed in the Fall of 2012 because of noise complaints. [34]

The National Museum of the Marine Corps in November 2010.

Two National Parks lie within the county. Prince William Forest Park was established as Chopawamsic Recreational Demonstration Area in 1936 and is located in eastern Prince William County. This is the largest protected natural area in the Washington, D.C. metropolitan region at over 15,000 acres (6,070 ha). Manassas National Battlefield Park, located north of Manassas in Prince William County, preserves the site of two major American Civil War battles: the First Battle of Manassas on July 21, 1861, and the Second Battle of Manassas which was fought between August 28 and 30, 1862. Outside the South, these battles are commonly referred to as the first and second battles of Bull Run. 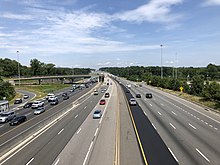 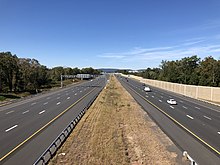 The county is traversed by many major highways and roads, including the following:

Manassas Regional Airport lies near its namesake city; for commercial passengers, both Dulles Airport and Ronald Reagan Washington National Airport are located nearby.

Public busing in the county is provided by the Potomac and Rappahannock Transportation Commission. Services provided by PRTC include OmniRide, OmniLink, and OmniMatch.