Northampton County is a county located in the Commonwealth of Virginia. As of the 2010 census, the population was 12,389. [2] Its county seat is Eastville. [3]

Northampton and Accomack Counties comprise the Eastern Shore of Virginia.

When English colonists first arrived in the area in the early 1600s, the Virginia Eastern Shore region was governed by Debedeavon (aka "The Laughing King"), paramount chief of the Accawmacke clans who numbered around 2000 at the time. The former name of the county was Accomac Shire, one of the original eight shires of Virginia after the founding of the first settlement at Jamestown in 1607. In 1642, the name was changed to Northampton County by the English, to eliminate "heathen" names in the New World. In 1663, Northampton County was split into two counties that still exist today. The northern two-thirds took the original " Accomac" name (Accomack County), while the southern third to the Point Cape Charles remained as Northampton. 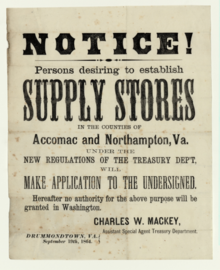 Northampton County is notable for a colonial court case involving an indentured servant. The first free negro (a term used prior to the abolition of slavery) in North America was Anthony Johnson of Northampton County. Johnson was one of the first African-Americans to own land in America. [4]

In 1653, Johnson brought suit in Northampton County Court to argue that one of his servants, John Casor, was indentured to him for life. Casor had left him and was working for a neighbor.

The court ruled in Johnson's favor, making Northampton County the first jurisdiction to legally acknowledge that Negros could own slaves. [5] This court ruling decision also gives insight to how owners of indentured servants could easily choose to ignore the expiration of indentured contracts and force their servants into lifetime slavery. Although Casor, an African, had well-known white planters taking his part, he was reduced to lifetime slavery. Some planters sought more profitable methods of labor by taking advantage of Negro indentured servants, who had little recourse in the legal and social system to protect their rights. [6]