The politics of Virginia have followed major historical events and demographic changes in the commonwealth. In the 21st century, the northern region, often referred to as NOVA, an abbreviation for "Northern Virginia," has become more liberal in attitudes and voting, constituting a reliable voting bloc for Democrats. Political orientation varies by region, with the larger cities and suburban areas generally voting Democratic and the rural areas voting Republican. The southern, rural regions have remained rural and conservative. [1] 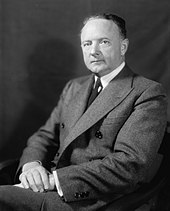 After the American Civil War (1861–1865), Virginia was in political turmoil. Forty-eight counties, which created the state of West Virginia in 1863, were about to be joined by two more. The Commonwealth of Virginia unsuccessfully appealed to the U.S. Supreme Court.

After U.S. Senator William Mahone and the Readjuster Party lost control of Virginia politics around 1883, white Democrats regained the state legislature. They proceeded to use statute and a new constitution in 1901, with provisions such as a poll tax, residency requirements, and literacy test to disfranchise most African Americans and many poor whites. Their disfranchisement lasted until after passage of civil rights legislation in the mid-1960s.

White Democrats created a one-party state, with a nearly unchallenged majority of state and most federal offices through the middle of the 20th century. The Byrd Organization headed by Harry F. Byrd Sr. largely controlled statewide politics. Through their leadership and activism in the Civil Rights Movement, African Americans gained national support for passage of the Civil Rights Act of 1964 and the Voting Rights Act of 1965, which provided Federal oversight and enforcement to maintain all citizens' ability to vote. Under Section 5 of the Voting Rights Act, decisions affecting elections are subject to preclearance by the U.S. Department of Justice before they can take effect.

Regional differences play a large part in Virginia politics. [2] Rural southern and western areas moved to support the Republican Party in response to its " southern strategy", while urban and growing suburban areas, including much of Northern Virginia and recently, Richmond form the Democratic Party base. [3] [4] Democratic support also persists in union-influenced Roanoke in Southwest Virginia, college towns such as Charlottesville and Blacksburg, and the southeastern Black Belt Region. [5] Enfranchisement and immigration of other groups, especially Hispanics, have placed growing importance on minority voting, [6] while voters that identify as "white working-class" declined by three percent between 2008 and 2012. [7] 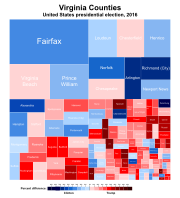 Treemap of the popular vote by county, 2016 presidential election.

In 2007, the Virginia General Assembly proposed Civil Remedial Fees or "abusive driver fees" were fines that could exceed $1,000 for certain moving violations. The proposal had gained bi-partisan support as a way to generate revenue while not increasing taxes. An online petition to oppose the bill quickly gathered nearly 100,000 signatures. [9] These were repealed one year later in 2008 and fees were refunded. [10]

Dozens of delegates run unopposed each election cycle, which led 2001 Libertarian gubernatorial candidate and former national LP chair Bill Redpath to conclude that "Virginia has a democracy that is uncompetitive and boring." [11] Redpath proposed eliminating the 40 single-member districts and have all state senators run state-wide, with the top 40 candidates with the highest vote count getting elected. However, this proposal would give more power to the highly populated urban areas of the state, and thus has little chance of statewide support. [12]

Unity control only lasted two years, and in the 2013 elections, Democrat Terry McAuliffe was elected Governor by two percentage points, [16] [17] and Democrat Ralph Northam was elected Lieutenant Governor by double digits. [18] [19] Republicans, however, maintained their super-majority (68–32) in the House of Delegates. [18] [20]

The 2017 statewide elections resulted in Democrats holding the three highest offices, with outgoing lieutenant governor Ralph Northam winning the governorship, Justin Fairfax becoming the second African-American elected lieutenant governor, and Mark Herring continuing as attorney general. Republicans meanwhile continued a statewide electoral drought that dates to McDonnell's 2009 gubernatorial victory. In concurrent House of Delegates elections, Democrats flipped fifteen of the Republicans' previous sixteen-seat majority. [21] Control of the House came down to the tied election in the 94th district, which was won by Republicans through drawing of lots, giving them a 51–49 majority. [22]

In federal elections since 2006, both parties have seen successes. Republican Senator George Allen lost close races in 2006, to Democratic newcomer Jim Webb, and again in 2012, to Webb's replacement, former Governor Tim Kaine. [26] In 2008, Democrats won both United States Senate seats; former Governor Mark Warner was elected to replace retiring Republican John Warner. [27] The state went Republican in 11 out of 12 presidential elections from 1948 to 2004, including 10 in a row from 1968 to 2004. However, Democrat Barack Obama carried Virginia's 13 electoral votes in both the 2008 and 2012 presidential elections. [7]

In the 2010 elections, Republicans won three United States House of Representatives seats from the Democrats. Of the state's eleven seats in the House of Representatives, Democrats hold seven and Republicans hold four. The state is widely considered blue-leaning, a trend which moves parallel with the growth of the Washington D.C. and Richmond suburbs. [28] A Federal District Court redrew the malapportioned 3rd District as violating the Voting Rights Act for the 2016 election. That allowed Virginians to choose in an additional black Representative from the 4th District, and added one to the Democratic total. [29]

In 2006, a statewide referendum on the Marshall-Newman Amendment added a provision to the Bill of Rights of the Virginia Constitution banning gay marriage; it passed with 57% of the vote.