Houston County /ˈhaʊstən/ is a county located in the central portion of the U.S. state of Georgia. The estimated 2019 population is 157,863. [1] Its county seat is Perry, although the city of Warner Robins is substantially larger in both area and population. [2]

The county was created on May 15, 1821, as one of five counties in the state, and later reduced in size with the formation of Bibb, Crawford, Pike, Macon, and Peach counties. [3] It was named after Georgia governor John Houstoun, with the spelling being a common 19th-century variation that later evolved to "Houston". [4] The pronunciation, however, remains to this day "howston." [5] The geographic center of the county was given the name Wattsville, which was later changed to Perry. [5] 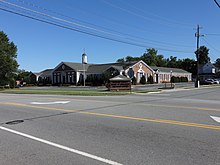