York County (formerly Charles River County) is a county in the eastern part of the Commonwealth of Virginia, located in the Tidewater. As of the 2010 census, the population was 65,464. [2] The county seat is the unincorporated town of Yorktown. [3]

Located on the north side of the Virginia Peninsula, with the York River as its northern border, York County is included in the Virginia Beach– Norfolk– Newport News, VA– NC Metropolitan Statistical Area.

York County contains many tributaries of the York River. It shares land borders with the independent cities of Williamsburg, Newport News, Hampton, and Poquoson, as well as James City County, and shares a border along the York River with Gloucester County.

Formed in 1634 as Charles River Shire, one of the eight original shires (counties) of the Virginia Colony, [4] and renamed York County in 1643, [5] York County is one of the oldest counties in the United States. Yorktown is one of the three points of the Historic Triangle of Colonial Virginia. It is the site of the last battle and surrender of British forces in 1781 at the conclusion of the American Revolutionary War, when the patriots gained independence from Great Britain.

In modern times, several important U.S. military installations have been developed in the county. It also has miles of waterfront residential and recreational areas. York County adjoins the Busch Gardens Williamsburg theme park and includes within its borders the affiliated Water Country USA water park, the Yorktown Riverfront area, Yorktown Battlefield and Visitor Center and American Revolution Museum at Yorktown. Yorktown is linked by the National Park Service's bucolic Colonial Parkway with Colonial Williamsburg and historic attractions at Jamestown, Virginia. Heritage tourism to the Historic Triangle draws international visitors and is a major economic activity for the county.

The area which is now York County was long inhabited by succeeding cultures of Native Americans. These were hunter-gatherer groups during the late Woodland Period (1000 BC to AD 1000) and earlier.

By the late 16th century, much of the coastal plain draining to the Chesapeake Bay of the current Commonwealth of Virginia was called Tenakomakah in Algonquian, meaning "densely inhabited land". [6] The historic tribes of the Tidewater area spoke related Algonquian languages. Other Algonquian-speaking peoples occupied coastal areas north and into present-day Canada, as well as to the South.

In the Virginia region, a weroance (or chief) named Wahunsunacock (1547–1618) of the Powhatan people created a powerful empire of eastern-Algonquian language-speaking peoples known as the Powhatan Confederacy; he conquered or allied by agreement with approximately 30 tribes. Known as the Powhatan, meaning the paramount chief, he was from a village also known as "Powhatan", near the fall line of the James River. (The Powhatan Hill neighborhood of the current city of Richmond was developed near this former site.) Chief Powhatan later established a second capital village, known as Werowocomoco, in a centrally located position in Tenakomakah. Rediscovered in the early 21st century by archeological work, it was located along the north bank of the York River in present-day Gloucester County. [7]

The Chiskiack tribe of the Powhatan Confederacy lived in York County along the York River until the 1630s. Escalating conflicts with the expanding English colony based at Jamestown caused them to move to the west. The English developed a village settlement near the village of Chiskiack and adopted its name. (It is sometimes spelled "Kiskiack"). This became part of the developments included within the present-day Naval Weapons Station Yorktown near Yorktown and are included in the military base. Cheesecake Road and Cheesecake Cemetery are also within the base; their names are thought to derive from the early Chiskiack people.

After the Powhatan moved his capital from this area in 1609, the site believed to have been Werowocomoco near Purtan Bay was lost to history. It was rediscovered in the early 21st century, and has been under continuing archaeological study projects. The discoveries and ongoing research led by the College of William and Mary hold great promise in expanding understanding of the lives of the Native Americans in the area during that era of York County's history.

In 1570, Spanish Jesuit priests founded the Ajacán Mission in this area. They were guided by interpreter Don Luis, a Native American from this area who had been taken captive by an earlier expedition. He was taken to Spain and later to Mexico, where he was baptized as Don Luis and educated in the Jesuit system. Ten years later after returning to Virginia, he soon abandoned the Spanish group. In February 1571 he led an attack on the Jesuits; all of the party except a young boy were killed. The following year, a Spanish force returned to the region for punishment and reclaimed the youth Alonso. The Spanish did not attempt another mission in this part of North America.

About 30 years later, English colonists arrived and established Jamestown in 1607 on the southern shore of the Virginia Peninsula in the Colony and Dominion of Virginia. In 1619, the area which is now York County was included in two of the four incorporations (or "citties") of the proprietary Virginia Company of London which were known as Elizabeth Cittie and James Cittie.

In 1643 Charles River County and the Charles River (also named for the king) were changed to York County [5] and York River, respectively. The river, county, and town of Yorktown are believed to have been named for York, a city in Northern England. 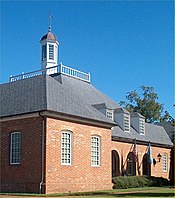 The first courthouse and jail were located near what is now Yorktown although the community, founded as a port for shipping tobacco to Europe, as variously called Port of York, Borough of York, York, Town of York, until Yorktown was established in 1691, when the House of Burgesses required each county to designate a port of entry and build warehousing. Although never formally incorporated as a town, Yorktown is the county seat of York County. The only town ever incorporated within the county's boundaries was Poquoson, which was incorporated in 1952 and became an independent city in 1975.

Porto Bello, the hunting lodge of Lord Dunmore, last royal governor of Virginia, still stands on the grounds of Camp Peary. It is listed on the National Register of Historic Places.

It is most famous as the site of the surrender of General Cornwallis to General George Washington in 1781, ending the American Revolutionary War. Yorktown also figured prominently in the American Civil War during the Peninsula Campaign in 1862.

The small unincorporated town of Lackey and a nearby area known as "the Reservation" were taken over by the U.S. Navy during World War I. This is now part of the Naval Weapons Station Yorktown. Many of the displaced African American landowners were eventually relocated to Grove, along the border between York and James counties.

During World War II, the sites of three other small York County towns were absorbed into U.S. government reservations. Penniman was the site of a World War I munitions facility operated by the DuPont company, and was made a part of Cheatham Annex) in 1943. To the west of Penniman, which is reported to have had a peak population of 15,000, on land which is now part of Camp Peary, the smaller towns of Magruder and Bigler's Mill were located. Much of Magruder's population and at least one church were relocated to Grove, increasing its population.

In 1949, the county grew by 4 square miles (10 km2), as land in that amount was ceded to York County by neighboring Warwick County. At the time, the move was part of a successful attempt by Warwick County to block an annexation suit brought by the City of Newport News. Warwick eventually consolidated with the city in 1958 by mutual agreement. (The reduction in size allowed Warwick County to claim an exemption from the proposed annexation at the time).

In 1975, the county lost 15.5 square miles (40.1 km2) of land as the incorporated town of Poquoson, which had been within York County, became an independent city, although ties between the county and the new city remained close. Over 40 years later, they continue to share courts, sheriff's office, a jail, and some constitutional services.

York County also adjoins another small independent city, Williamsburg, which was long located within James City County. In the 20th century, some areas of York County adjacent to Williamsburg were lost to the growing small city through annexation.

York County in the late 20th and early 21st centuries

From the 1980s to modern times, York County experienced a rapid transition from a rural county to a bedroom community for the neighboring core cities of Hampton and Newport News.

In modern times, York County and Yorktown in particular are part of an important historical area of attractions known as the Historic Triangle of Colonial Virginia, which includes Yorktown, Jamestown and Williamsburg. Yorktown is the northern terminus of the scenic Colonial Parkway operated by the U.S. National Park Service which links the three. In 2005, the county completed Riverwalk Landing, a successful pseudo-colonial waterfront development at Yorktown to revitalize the previously deteriorating beach and town district and complement the 2007 celebration of Jamestown.

Also, in terms of population clusters, the County is divided by a vast expanse of federal land in the midsection of the county, much of which is densely wooded park land, and military training areas. The southern portion of the County is dense with suburban developments and contains the majority of the county's population. There is little room for additional growth in the southern portion of York County because it is a relatively small area, and was essentially fully developed by the early 2000s. A small industrial area along the York River just East of Yorktown contains a power plant owned by Dominion Virginia Power, and a petroleum terminal on the former site of an oil refinery that ceased operation in 2010.

The northern portion is more connected with the Williamsburg community than Yorktown and, although less populous than the south, is also fairly dense. Having not seen a significant amount of growth until recently, the northern portion is now seeing the development of new residential communities and shopping areas.

The County is traditionally organized per Virginia Law. It is governed by a Board of Supervisors, who are elected for four-year terms by voters from each of the county's five districts. The Board appoints a County Administrator to act as the administrative head of the county. The current county administrator is Neil Morgan. [17] [18]

York County Board of Supervisors

York County is home to several large and important military facilities of the United States. Located along the York River, small portions of each base extend into adjacent James City County as well.

The Naval Weapons Station Yorktown was originally established during World War I by order of President Woodrow Wilson, and now includes the formerly separate Cheatham Annex Supply Complex. Camp Peary was established during World War II as a Seabee Training Base. As the war progressed, it became valuable to the Allied Forces to house sensitive prisoners-of-war from captured German naval vessels; it was important for Nazi authorities to be unaware of their capture, since that also meant secret code books thought lost-at sea may also have been compromised. Many of these POWs made Virginia and the United States their new homeland after the War. Separating these two large military reservations is Queen's Creek, which originates in the western reaches of the county and drains to the York River.

York County contains some former towns including Yorke, and a large number when the military reservations were created in the first half of the 20th century. These include the original Lackey (known locally as "the Reservation"), Halstead's Point, Penniman, Bigler's Mill, and Magruder. Many relocated residents and their descendants, many of whom were farmers and watermen, now live in such places as Yorktown, Gloucester, Lee Hall, Grove, and Lightfoot.