Clarke County is a county in the Commonwealth of Virginia. As of the 2010 census, the population was 14,034. [1] Its county seat is Berryville. [2] Clarke County is included in the Washington-Arlington-Alexandria, DC-VA-MD-WV Metropolitan Statistical Area.

The first settlement of the Virginia Colony in the future Clarke County was in 1736 by Thomas Fairfax, 6th Lord Fairfax of Cameron who built a home, Greenway Court, on part of his 5 million acres (20,000 km2) property, near what is now the village of White Post. White Post was named for the large signpost pointing the way to Lord Fairfax's home.

As it lay just west of the Blue Ridge border demarcated under Governor Spotswood at Albany in 1722, the area was claimed along with the rest of the Shenandoah Valley by the Six Nations Iroquois (who had overrun it during the later Beaver Wars in around 1672), until the Treaty of Lancaster in 1744, when it was purchased from them by Governor Gooch.

Many of the early settlers of what became Clarke County were children of Tidewater planters, who settled on large land grants from Lord Fairfax. Two-thirds of the county was settled by the plantation group, and the plantation lifestyle thrived until the Civil War. County status came in 1836 when it was divided off from Frederick County. Clarke was known for its large crops of wheat.

During the American Civil War, John S. Mosby, "the Gray Ghost" of the Confederacy, raided General Sheridan's supply train in the summer of 1864, in Berryville. The Battle of Cool Spring was fought in Clarke County on July 17 and 18th, 1864, and the Battle of Berryville on September 3, 1864.

In 1881 was founded the Bank of Clarke County, still functional regional bank headquartered in Berryville. [3]

Early in the 20th century, future Virginia politician Harry F. Byrd, Sr. and his wife established their first home near Berryville, where he undertook extensive agricultural activity growing peaches and apples. Byrd became a State senator in the upper house of the Virginia General Assembly, served a term as a Governor of Virginia, and was a United States Senator for over 30 years, heading the powerful Byrd Organization which dominated state politics between the mid-1920s and 1960s.

In 1996, Forrest Pritchard revitalized Smithfield Farm by starting a grass-fed, sustainable livestock operation. Renamed 'Smith Meadows', it is currently one of the oldest fully grass-finished farms in the United States, and its story was chronicled in the New York Times bestseller Gaining Ground. 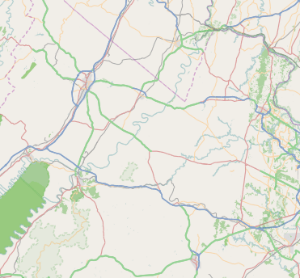