This area was originally named Allendale, after Confederate Major J. H. Allen who operated the first cargo steamboat along the Kissimmee River – the Mary Belle. [7] It was renamed Kissimmee when incorporated as a city in 1883. The etymology of the name Kissimmee is debated, apart from general agreement that it is Native American in origin. [8] Its growth can be credited to Hamilton Disston of Philadelphia, who based his four-million acre [9] (8,000 km2) drainage operation out of the small town. Disston had contracted with the financially wobbly state of Florida to drain its southern lands, for which he would own half of all he successfully drained. This deal made Disston the largest single landowner in the United States.

But the heyday of Kissimmee was short-lived. Expanding railroads began to challenge the steamships for carrying freight and passengers. By 1884, the South Florida Railroad, now part of the Plant System, had extended its tracks to Tampa. The Panic of 1893 was the worst depression the U.S. had experienced up to that time, crushing land speculation and unsound debt. Hamilton Disston closed his Kissimmee land operation. Consecutive freezes in 1894 and 1895 wiped out the citrus industry. The freezes, combined with South Florida's growth and the relocation of steamship operations to Lake Okeechobee, left Kissimmee dependent on open range cattle ranching. [10] [11]

Ranching remained an important part of the local economy until the opening of nearby Walt Disney World in 1971. After that, tourism and development supplanted cattle ranching to a large measure. However, even though the Disney facility took over much of the open range cattle lands, cattle ranches still operate nearby, particularly in the southern part of Osceola County. [13]

The downtown area lies near the intersection of U.S. Highway 17/92 and U.S. Highway 192. The downtown of Kissimmee does not possess any big skyscrapers; most of the buildings are two or three stories high. The biggest and the tallest building in the downtown is the Osceola County courthouse. The main thoroughfare follows along Highway 17/Highway 92 through the city's center and is a combination of three streets: Main Street, Broadway Street, and Emmett Street. The downtown area consists largely of restaurants, small shops, and historic residences. The University of Central Florida has a business incubator located in the area that is an important part of the economic engine downtown. [16]

The climate in this area is characterized by hot, humid summers and generally mild, dry, and sunny winters. According to the Köppen Climate Classification system, Kissimmee has a humid subtropical climate, abbreviated "Cfa" on climate maps. [17]

There were 17,121 households out of which 37.4% had children under the age of 18 living with them, 47.2% were married couples living together, 15.8% had a female householder with no husband present, and 31.0% were non-families. 20.9% of all households were made up of individuals and 4.9% had someone living alone who was 65 years of age or older. The average household size was 2.77 and the average family size was 3.21.

According to Kissimmee's 2018 Comprehensive Annual Financial Report, [20] the top employers in the city are: 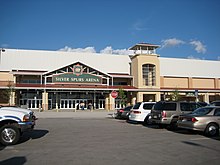 The Shingle Creek Regional Trail (SCRT) is an inter-governmental project that has been planned to connect Kissimmee to Orlando through a 32-mile bicycle trail. It runs along the environmentally sensitive Shingle Creek, and was included on President Obama's America's Great Outdoors list. [21] Various sections of the trail have opened recently.

Kissimmee is near Orlando, home to Universal Orlando Resort and SeaWorld Orlando Resort, and Lake Buena Vista/Bay Lake, home to Walt Disney World Resort, allowing tourists to access the parks through the city.

Kissimmee Gateway Airport has four fixed-based operators that provide service to the area. Kissimmee Gateway Airport (ISM) accommodates general aviation air service 24 hours a day with two paved airport runways—respectively 5,000 and 6,000 feet. [22] There are also two flight training schools, and a museum at the airport. Orlando International Airport can be reached from Kissimmee in 15 minutes by car.