Titusville is a city and the county seat of Brevard County, Florida, United States. [7] The city's population was 43,761 as of the 2010 United States Census. [3] Titusville is located along the Indian River, west of Merritt Island and the Kennedy Space Center, and south-southwest of the Canaveral National Seashore. It is a principal city of the Palm Bay– Melbourne–Titusville Metropolitan Statistical Area.

Near Titusville is the Windover Archeological Site, a National Historic Landmark recognizing its important collection of human remains and artifacts of the early Archaic Period (6,000 to 5,000 BCE.)

A secondary, de facto county seat was established beginning in 1989 at Viera, Florida, in the geographic center of the county, to better serve the more populous southern portion of the county.

Indigenous peoples had inhabited this area for thousands of years, as shown by discovery in 1982 of the Windover Archeological Site, dating to the early Archaic Period (6000 to 5000 BCE). It has been designated as a National Historic Landmark because of the significance of its remains.

At the time of European encounter, this area was inhabited by the Ais Indians, who gathered palmetto, cocoplum and seagrape berries. They also fished the Indian River, called the Rio de Ais by Spanish explorers. By 1760, however, the tribe had disappeared due largely to infectious disease, slave raids, and the disruptive effects of rum.

The United States acquired Florida from Spain in 1821, and the Seminole Wars delayed settlement of portions of the new territory.[ citation needed]

This community was originally called Sand Point, and a post office was established in 1859, although it closed a few months later. Henry T. Titus arrived in 1867, intending to build a town on land owned by his wife, Mary Hopkins Titus, daughter of a prominent planter from Darien, Georgia. He laid out roads and in 1870 erected the Titus House, a large, one-story hotel next to a saloon. He also donated land for four churches and a courthouse, the latter an effort to get the town designated as county seat.[ citation needed]

Local history says that Titus challenged Capt. Clark Rice to a game of dominoes to decide the name of the town. Titus won the game, and Sand Point was renamed as Titusville in 1873. [8] The city was incorporated in 1887, the year construction began on St. Gabriel's Episcopal Church, as listed in the 1972 National Register of Historic Places. At one point, Titusville was nicknamed "The City of Churches".[ citation needed]

The Atlantic Coast, St. Johns & Indian River Railroad reached Titusville in 1885, constructed from Enterprise, Florida. It was connected by a spur line to the Jacksonville, Tampa & Key West Railroad at Enterprise Junction in present-day DeBary, Florida. Henry Flagler extended his Florida East Coast Railroad south from Daytona, building a station at Titusville in 1892. Many tourists arrived by railroad to enjoy the mild winter climate.

In addition, the railroad was a means to ship area produce to northern markets, and the Indian River area increasingly became an agricultural and shipping center for pineapple and citrus goods. A wooden bridge was built east to Playalinda Beach in 1922.[ citation needed]

Beginning in the late 1950s, the growth of Cape Canaveral, and later the Kennedy Space Center on Merritt Island, stimulated growth in the community's economy, population and tourism. The association with the space program led to the city's two nicknames in the 1960s: Space City USA and Miracle City[ citation needed].

The jail at the county courthouse became overcrowded by the 1980s. Jailbreaks were common. They ceased after prisoners were moved in 1986 to a new jailhouse built in Sharpes.[ citation needed]

Computer Shopper was founded in Titusville in 1979 by Glenn Patch, first as a tabloid. It was later expanded as a magazine of over 800 pages per issue. It was published in Titusville until September 1989. [10] That year operations were to be moved to New York City in a joint venture between Patch Communications of Titusville and Ziff Davis. [10]

In January 2013, Miracle City Mall closed, a victim of a declining local economy after the termination of the Space Shuttle program in 2012. In addition, county population had moved to the south, and changing shopping habits had adversely affected malls across the country. [9] Demolition of Miracle City Mall occurred February 2015. The site has been redeveloped as a mixed-use outdoor shopping complex called Titus Landing.[ citation needed]

Because of population decline, the USPS had closed two post offices in Titusville by 2013, and discussed closing a third. [12]

The city is the only place in the world where the endangered Dicerandra thinicola, or "Titusville mint" grows. The fields are located along a 13 miles (21 km) strip between the Titusville wellfield and Mims. [15]

Titusville has—as the rest of central Florida does—a very warm humid subtropical climate with significant influence from the tropics, although the cooler winter lows than farther south separates it from the classification.

Titusville is run by a council-manager government. The elected city council serves as the city's legislative branch, while the appointed city manager carries out policies defined by the council. The city is governed according to its Charter, adopted on June 3, 1963. [18]

The city has 1.8 police officers per thousand residents. This is 52% below average statewide for cities of its size. [21]

A 2011 study rated the pension fund for city employees as mediocre or poor. [22]

Titusville's five city council members (one of whom is the mayor) are elected at-large to four-year, staggered terms. As the city's legislative body, the council determines all municipal policies not explicitly covered by the city charter or state legislation. It also adopts ordinances and resolutions, cote appropriations, approve budgets, determine the tax rate, and appoint citizens to serve on advisory boards and commissions. [23]

The mayor presides over all city council meetings and votes as a council member. The mayor is the recognized head of city government for ceremonial and military law purposes, but has no regular administrative duties. The vice mayor is chosen from among the council members at their annual organizational meeting and takes the mayor's place during absence or disability. [23]

The city manager is chosen by the city council on the basis of training, experience and ability, and serves at the pleasure of the council for an indefinite period of time. The city manager is tasked with enforcing all laws and ordinances, appointing and removing department heads and employees, supervising all departments, keeping the council advised on the city's financial situation, keeping the council and public informed of the city government's operations. [18]

The Brevard County Courthouse is located here. A new jail was built outside town to meet current standards. A full range of county services are provided at the county seat.

In 2010, private business was 24.7 percent "other"; 21.5 percent trade, transportation and utilities, 18.1 percent professional and business services; 13.7 percent educational and health services; 12 percent construction; and 10 percent leisure and hospitality. [17] The economy shrunk after lay-offs involving the end of the space shuttle program in 2011, since many employees live in Titusville. Titusville has a high[ clarification needed] unemployment rate.[ citation needed]

Many of Titusville's major employers are aerospace companies. [25] Knight's Armament Company in Titusville is believed to be the state's largest manufacturer of small arms. [26] Parrish Medical Center, located in Titusville, is the city's largest employer. In October 2013, Barn Light Electric Company opened a new manufacturing plant, providing work for at least 60 former NASA workers and men who had completed drug rehabilitation. [27]

The city has benefited from tourism associated with the space program, and the TICO Warbird Air Show each March draws about 40,000–50,000 visitors. [28]

While 47 miles (76 km) from the event, the city gets a noticeable economic effect from bikers on their way to the annual Daytona Beach Bike Week. [29]

Shopping centers include Walmart Supercenter and Target. They are located in the city's shopping district at the southern end of the city, near the intersection of State Road 405 (Florida) and State Road 50 (Florida).

The library provides adult and children's programs. [33] [34] [35] [33] There is a genealogy section with over 2200 books, over l00 periodicals, microfiche and film. Volunteers are in the library on Thursdays to help with research. [33] The Library also has a microfilm machine to aid in research. [36]

In 2015, a former patron left the Titusville Public Library a donation of about $860,000. This has been the largest donation made to the Brevard County Library System to date. [37] Renovations started in 2017 and are expected to be finished by 2018. [38] 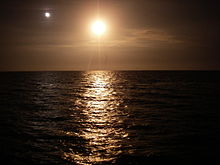 Parrish Medical Center, originally established as North Brevard Hospital in 1958, is the hospital that serves Titusville. [44] A new 371,000-sq.ft., $80 million hospital was completed in 2002. [44] It was the first medical center in the Southeast region designed and constructed using the 7 Principles of Evidence-Based Design to create a healing environment. It was also among the first participants of The Pebble Project, a national research initiative to demonstrate that healing environments improve overall quality of care and create life-enhancing environments for patients, families and employees.

It was estimated in 2007 that 88.1 percent of all Titusville residents 25 years or older are high school graduates, and 23.6 percent have a bachelor's degree or higher. [25]

Primary and secondary public schools are run by the Brevard County School Board: