Longwood is a city in Seminole County, Florida, United States. The population was 13,657 at the 2010 census. It is part of the Orlando–Kissimmee–Sanford, Florida Metropolitan Statistical Area. 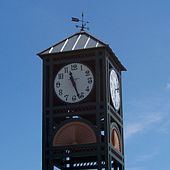 With the advent of World War II, growth began to impact Longwood as military personnel flowed into the new Naval Air Station Sanford to the north and Orlando Army Air Base to the south. By the 1950s, NAS Sanford was being converted into a Master Jet Base for carrier-based heavy attack aircraft and, along with the re-designated Orlando Air Force Base and nearby Pinecastle AFB (later renamed McCoy AFB), saw even more military families renting or purchasing homes in and around Longwood. In 1959, the City had slightly over 1,000 residents and a city limit boundary that measured approximately 1-mile (1.6 km) by 1-mile (1.6 km) square. In 1960, Longwood Elementary School was constructed and opened inside the city limits. During the 1950s and 1960s, the city also boasted its own airport, a single runway grass airstrip used mainly by private airplanes. Longwood Airport was located on the west side of the city and on the north side of State Road 434, until it was closed and developed into tract housing that became The Woodlands subdivision in the mid-1960s.

In 1965, the City served as a film site and backdrop, representing a fictional south Florida town adjacent to a Seminole Indian tribe reservation in the Universal Studios film, Johnny Tiger. Released in 1966, the film starred Robert Taylor, Geraldine Brooks and Chad Everett. [7]

New economic and development opportunities were brought to the area in the 1960s and 1970s, fueled by both the military and the space industry, as newly-arriving Longwood residents were employed at Martin-Marietta's new missile plant in Orlando; Naval Air Station Sanford; Orlando Air Force Base (redesignated Naval Training Center Orlando in 1969); and McCoy Air Force Base in Orlando; as well as Cape Canaveral Air Force Station; Patrick Air Force Base; and the NASA John F. Kennedy Space Center in Brevard County. The development and opening of Walt Disney World in October 1971, along with other tourist attractions and the high technology corridor of businesses, especially those engaged in the modeling, simulation and training (MS&T) industry and associated military training systems activities near Florida Technological University (FTU), now the University of Central Florida (UCF), fueled even further growth. Short-term economic downturns caused by the closure of NAS Sanford in 1968 and McCoy AFB in 1975 were offset with other economic growth across Central Florida during the 1970s and 1980s. As a result, Longwood developed into primarily a residential community for residents working elsewhere in Seminole County or in adjacent Orange County. By 2000, the city had taken significant steps to revitalize its downtown historic district, expanded its borders through annexation and in the process gained a resident population exceeding 13,700. [8]

According to the City's 2014 Comprehensive Annual Financial Report, [9] the top employers in the city are:

The city of Longwood's public schools are a part of Seminole County Public Schools. Longwood contains four public elementary schools (K-5), two public middle schools (6-8), and one public high school (9-12). Two additional high schools are located outside of Longwood, but draw some students from within the city limits.

Longwood area congregations include the following, which share in an annual community Thanksgiving Eve worship and an annual CROP walk to combat hunger: