Leesburg is in central Florida, between Lake Harris and Lake Griffin, at the head of the Oklawaha River system. It is part of the Orlando–Kissimmee–Sanford Metropolitan Statistical Area.

Leesburg is the home of Lake–Sumter State College (LSSC), which also has campuses in Clermont and Sumterville, Florida. It is also the home of Beacon College.

Leesburg was first settled in 1857 by Evander McIver Lee. Several of his brothers followed him to the area. One of them, Calvin Lee, was credited with giving the town its name. The city was incorporated in 1875, and was designated as the county seat of Sumter County for a time. When Lake County was formed in 1887, Tavares was designated as its seat.

In the early 20th century, Leesburg was an important center for watermelon production. In 1930, it held its first Watermelon Festival, an annual tradition that lasted for nearly 30 years. But gradually watermelon production dwindled and, for the last festival in 1957, watermelons had to be brought to the city from outside the area.

In 1938, during the Great Depression, the Franklin D. Roosevelt administration invested in infrastructure and improvement projects across the county. Its Works Progress Administration began work on the Venetian Gardens waterside park, located on the shores of Lake Harris. These canals and gardens have been a centerpiece of the community ever since.

Lake Square Mall, the city's major shopping mall, opened in 1980. On March 19, 1982, Ozzy Osbourne's guitarist Randy Rhoads, as well as the band's cook and bus driver, were killed in a plane crash at Flying Baron Estates. [5]

The citrus industry was the principal business in this area for decades, but devastating freezes in December 1983 and February 1985 persuaded growers to move their groves further south. In 1997, Leesburg Bikefest started. It has since become an annual spring tradition, with upwards of 250,000 people attending every year.

Today, most of Leesburg's growth and economic development is the result of its increasing popularity as a retirement destination. In addition, the rapid growth of nearby Orlando has resulted in demand for housing here, as many people commute to Orlando for work. In 2011 and 2017, the Leesburg High School boys' basketball team won the 4A state championship.

Several major highways pass through Leesburg, including U.S. Highway 27, U.S. Highway 441 and S.R. 44. Florida's Turnpike passes just to the south and west of Leesburg. Leesburg was on the western leg of the Dixie Highway.

Leesburg International Airport is a small hub airport at the intersection of CR 44 and US 441, in front of Lake-Sumter State College. It is a hub of JetSky airlines, and serves Lake, Sumter, and Marion Counties.

There were 6,775 households out of which 24.5% had children under the age of 18 living with them, 39.6% were married couples living together, 16.8% had a female householder with no husband present, and 39.8% were non-families. 33.9% of all households were made up of individuals and 18.1% had someone living alone who was 65 years of age or older. The average household size was 2.26 and the average family size was 2.86. 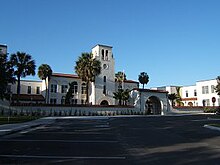 The Leesburg Public Library is among the busiest in the Lake County Library System. It presents a diverse schedule of programs and services for all ages from toddlers to senior citizens.  The library checks out more than 20,000 items each month to patrons.

The library has developed a great deal since its beginnings around 1875 as the private book collection of Mrs. A.B. Efird, stored in her husband’s store on the north side of Main Street in Leesburg, approximately where the Tropic Theater is now.

By 1920 the building had deteriorated. The Leesburg Women’s Club moved and preserved the collection for several years in the club building. Many of the club's members were also active members of the Friends of the Leesburg Public Library.

The library finally got a room in the community building at Venetian Gardens in 1953 when the City of Leesburg established a library charter. As the collection grew it moved in 1965 to the old post office and then again in 1983 to the old downtown Sears store building. [7]

The Leesburg Public Library became part of the Lake County Library System in 2002.

In 2007 the library moved to its current location at 100 East Main Street. The 42,000-square-foot building was the first to be built specifically as a library and houses a bookstore and a lake-themed youth area, "Imagination Cove". The library is also noteworthy for two commissioned works of public art by John Bennett that surround it: "Annie Oakley and Dave" and "A Grandmother's Legacy". [8]

The Leesburg Center for the Arts

In 2000 local art enthusiasts and community organizers founded the Leesburg Center for the Arts to provide a center of art education, awareness and opportunities to the citizens of Leesburg and enrich the community with art and culture. The Center for the Arts is a nonprofit funded by annual memberships. It offers daily programs and classes, as well as art exhibitions. [9]

From 1922 to 1924, the city's Cooke Field was used by the Philadelphia Phillies for their spring training sessions. [10] On March 14, 1923, the stadium was used for the site of an exhibition game between the Phillies and the St. Louis Cardinals. [11] In 1936, the city built the Ballpark at Venetian Gardens, which was used by several minor league baseball clubs that played in the Florida State League from 1937 to 1968. The city won league titles in 1941 and 1946. [12] Since 2007, the city has been the home of the Leesburg Lightning, a wood-bat collegiate summer baseball team in the Florida Collegiate Summer League.

During the 1920s, sharpshooter Annie Oakley, who had a residence in Leesburg, performed shooting exhibitions at Cooke Field, including one for the Philadelphia Phillies. [13]

In spring 2017, the Holding Company of the Villages planned to acquire 2,600 acres north and south of County Road 470 along the east side of Florida’s Turnpike for future development. The deal with the mega-retirement community has passed due diligence by the Leesburg City Commission. Age-restricted zoning ordinance changes have already been approved by the Leesburg Planning Commission (with the city commission giving final approval). [15] The initial plans call for building approximately 4,500 homes and some commercial development. [16]