From Wikipedia, the free encyclopedia
Category 3 Atlantic hurricane in 2004
This article is about Hurricane Jeanne in 2004. For other storms of the same name, see Tropical Storm Jeanne (disambiguation).

Hurricane Jeanne was a Category 3 hurricane that struck the Caribbean and the Eastern United States in September 2004. It was the deadliest hurricane in the Atlantic basin since Mitch in 1998. It was the tenth named storm, the seventh hurricane, and the fifth major hurricane of the season, as well as the third hurricane and fourth named storm of the season to make landfall in Florida. After wreaking havoc on Hispaniola, Jeanne struggled to reorganize, eventually strengthening and performing a complete loop over the open Atlantic. It headed westwards, strengthening into a Category 3 hurricane and passing over the islands of Great Abaco and Grand Bahama in the Bahamas on September 25. Jeanne made landfall later in the day in Florida just two miles (three kilometers) from where Hurricane Frances had struck a mere three weeks earlier.

Building on the rainfall of Frances and Hurricane Ivan, Jeanne brought near-record flood levels as far north as West Virginia and New Jersey before its remnants turned east into the open Atlantic. Jeanne is blamed for at least 3,006 deaths in Haiti with about 2,800 in Gonaïves alone, which was nearly washed away by floods and mudslides. The storm also caused 8 deaths in Puerto Rico, 18 in the Dominican Republic and 5 in the rest of the United States, bringing the total number of deaths to at least 3,037; Hurricane Jeanne is one of the deadliest Atlantic hurricanes recorded. Final property damage in the continental United States was $7.5 billion, plus an additional $270 million in the Dominican Republic and $169.5 million in Puerto Rico. 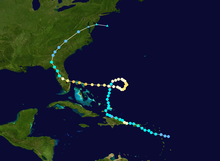 Map plotting the track and the intensity of the storm, according to the Saffir–Simpson scale
Main article: Meteorological history of Hurricane Jeanne

Tropical Depression Eleven formed from a tropical wave 70 miles (110 km) east-southeast of Guadeloupe in the evening of September 13, [1] and was upgraded to Tropical Storm Jeanne the next day. [2] Jeanne passed south of the U.S. Virgin Islands on September 15, [3] making landfall near Yabucoa, Puerto Rico later the same day. [4] After crossing Puerto Rico, Jeanne reached hurricane strength on September 16 near the eastern tip of the Dominican Republic on the island of Hispaniola, [5] but fell back to tropical storm strength later that day as it moved across the mountainous island. [6] Jeanne moved offshore the Dominican Republic late in the afternoon of September 17. [7] By that time, Jeanne had weakened to tropical depression strength. [8] Even though Jeanne did not strike Haiti directly, the storm was large enough to cause flooding and mudslides, particularly in the northwestern part of the country. [9]

On September 18, while the system was being tracked near Great Inagua and Haiti, a new center formed well to the northeast and the previous circulation dissipated. [10] The system restrengthened, becoming a hurricane on September 20. [11] Jeanne continued to meander for several days (making a complete loop in the process) before beginning a steady westward motion toward the Bahamas and Florida. [9]

Jeanne's track continued to follow within 20 miles (32 km) of that of Frances until it reached Pasco County. [16] The cyclone then swung more rapidly to the north, and the center remained over land all the way to the Georgia state line, unlike Frances which exited into the Gulf of Mexico. Jeanne became an extratropical cyclone over Virginia on September 28 and the system moved back into the Atlantic offshore the New Jersey coast the next day. [16]

Puerto Rico and the Leeward Islands

Although Jeanne then tracked away from the Bahamas, the storm was threatening the archipelago again by September 23. As a result, the tropical storm watch for Cat Island, Exumas, Long Island, Rum Cay and San Salvador was resulted at 0900 UTC. A hurricane watch was then issued for the northwestern Bahamas by 1730 UTC on September 23. Around 0900 UTC the next day, a hurricane warning was posted for Abaco Islands, Andros Islands, Berry Islands, Bimini, Eleuthera, Grand Bahama Island, and New Providence, while a tropical storm watch was simultaneously issued for Cat Island, Exumas, Long Island, Rum Cay, and San Salvador. Late on September 25, the tropical storm warning was canceled. Early on the following day, the hurricane warning was downgraded to a tropical storm warning for Abaco Islands, Berry Islands, Bimini and Grand Bahama Island, while the remaining portion – Andros Islands, Eleuthera and New Providence – was discontinued. All tropical cyclone warnings and watches were canceled by 0900 UTC on September 26. [9]

Because Hurricane Frances struck only about two week prior, numerous houses were still patched with plastic sheeting on their roofs, while other residents were still living with neighbors or relatives. Officials urged residents in low-lying homes to evacuate. Shelters were set up at the churches and schools on Abaco Islands, Eleuthera, Grand Bahama. At least 700 people went to a shelter in Abaco Islands alone. [18] Preparations in Central Florida were rushed and sudden, as it did not become apparent that the storm would make a direct hit until the morning of the 23rd. [19] Indeed, it had appeared the storm would pass safely offshore just the night before. [20] Voluntary evacuations were advised on Thursday and Friday, plans for opening shelters on Saturday were distributed to the public, and Florida Power and Light warned that power could be out "for an extended period of time". [21] Canals were also drained on the same day. [21]

On Friday, the Palm Beach Zoo prepared for the storm by moving small animals and birds into buildings such as restrooms and restaurants. [22] Evacuations began in earnest, with many residents leaving for the Keys, noting that the islands were the only location definitely out of harm's way. For once, evacuation to the Keys made sense. [23]

The center of Jeanne's eye achieved landfall near Stuart, at virtually the identical spot that Frances had come ashore three weeks earlier, the first time in record keeping that a hurricane made landfall in the same place as a previous storm of the same season. Maximum winds at the time of landfall were estimated to be near 120 m.p.h. [24]

In its early states, Jeanne dropped heavy rainfall in Guadeloupe, peaking at 11.81 inches (300 mm). [25] The communes of Bouillante, Deshaies, and Pointe-Noire were the hardest hit. In Bouillante, 60 homes were damaged. The storm ruptured water pipes in the city of Bois Malher, isolating about 1,000 people. Damage to businesses resulted in 30 employees being laid-off. Crops also suffered impact, especially bananas. At the Malendure resort, which is located along the coast, the pier, restaurants, and dive base were rendered unusable. In Deshaies, 110 homes were severely damaged, including 60 in the city of Ferry. About a dozen boats were beached or capsized. Many roads and bridges were inflicted with damage. [26]

In Point-Noire, nearly 300 single-family homes were damaged or demolished. Three bridges were destroyed, while numerous roads were also affected. Further south in Vieux-Habitants, roads also suffered damage, particularly in the Beaugendre area, leaving a dozen households isolated. A primary school was impacted beyond repairs. In Saint-François, a trench was dug along a major highway to prevent a residential subdivision from flooding. [26]

Puerto Rico was impacted by tropical storm force winds and heavy rain, with flooding on a historic scale. [24] The storm made landfall near Maunabo midday on September 15. [27] The storm generally moved northwest through the island, exiting on the northwest coast near the town of Mayagüez around 11 p.m. [27] Jeanne passed directly over the towns of Arroyo, Patillas, Guayama and Salinas on its trip over the Commonwealth. [27] San Juan reported a wind gust of 73 mph (117 km/h), [9] Carolina reported gusts to 71 mph (114 km/h), [27] and rainfall ranged from 5.98 inches (152 mm) in the city to over 24 inches (610 mm) in Vieques. [28] This excessive rainfall resulted in damage to roads, landslides, and collapsed bridges. [28] This resulted in one death and the evacuation of 400 people near the Río Grande de Añasco. [28] A total of eight people were reported dead in Puerto Rico as a result of Jeanne. Damages from the storm were estimated at $169.5 million (2004 USD). [29] 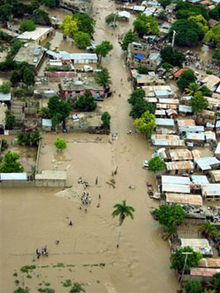 By September 17, heavy rains totaling about 13 inches (330 mm) in the northern mountains of Haiti caused severe flooding and mudslides in the department of Artibonite, causing particular damage in the coastal city of Gonaïves, where it affected about 80,000 of the city's 100,000 residents. As of October 6, 2004 the official report counted 3,006 people dead, with 2,826 of those in Gonaïves alone. [30] Another 2,601 people were injured, and 7 people died.

Decades of deforestation left surrounding valleys unable to hold the 30 hours of rain from Hurricane Jeanne, causing massive landslides. Aid trucks were forced to ford floodwaters and mudslides on National Route 1. In addition, the flooding destroyed all of the rice and fruit harvest in the Artibonite which has been regarded as "Haiti's breadbasket". Some residents had buried unclaimed corpses in their backyards. There were also mass burials of bodies tipped into a massive pit from dump trucks, despite objections to their ceremonious nature and discouragement from the World Health Organization, due to the popular but incorrect belief that dead bodies would lead to catastrophic outbreaks of exotic diseases. [31]

See also: Effects of Hurricane Jeanne in the Mid-Atlantic region

Millions in Florida were left without electricity, some for the third time in a month. There were only five direct deaths in the mainland United States, three in Florida, one in South Carolina and one in Virginia. The final US damage was determined to be around $7.5 billion. It was difficult to isolate this from damage caused by Hurricane Frances (and, around Polk County and Highlands County, from Hurricane Charley as well). 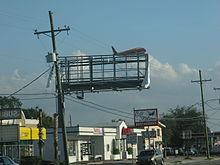 Throughout Delaware, the remnants of Jeanne produced between 4 and 8 in (100 and 200 mm) of rain, [35] peaking at 7.1 in (180 mm) at the University of Delaware. [34] This led to widespread street flooding and several rivers overflowed their banks. Forty people had to be rescued from a bus along the White Clay Creek after the creek crested at .59 ft (0.18 m) above flood-stage. [35] A strong F2 tornado touched down in the state, injuring five people and leaving $1 million in damages. The tornado touched down in northern New Castle County and tracked for 5 mi (8.0 km) and generated winds up to 130 mph (210 km/h). The county airport sustained significant damage, five C-130 cargo planes were damaged, thousands of pounds of jet fuel spilled, and damaged hangars. At a nearby industrial park, metal siding was torn off buildings, windows were shattered and power lines were downed. A self-storage facility sustained substantial damage. [36]

In Maryland, Jeanne produced up to 4 in (100 mm) of rain, [34] triggering flash flooding throughout the state. [37] Numerous roads were flooded, [38] including parts of Maryland Route 17. [39] Several rivers rose above their flood-stage, with the Big Elk Creek cresting at 9.3 ft (2.8 m), 0.3 ft (0.091 m) above food-stage. [40] A total of 50 roads were closed due to high water throughout the state. Numerous reports of stranded vehicles were sent to the Emergency Operations Center. In Carroll County, a group of inmates required rescue after the jail they were in flooded. [41] One brief F0 tornado touched down in the state near Solomons, causing minor damage. [42]