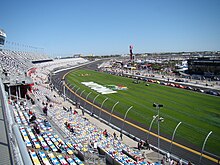 Florida gained its first permanent major-league professional sports team in 1966 when the American Football League added the Miami Dolphins. The state of Florida has given professional sports franchises some subsidies in the form of tax breaks since 1991. [1] 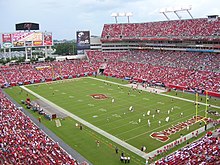 Miami's first entry into the American Football League was the Miami Dolphins, which competed in the fourth AFL league from 1966 to 1969. In 1970 the Dolphins joined the National Football League when the AFL–NFL merger, agreed to in 1966, was finalized. The team made its first Super Bowl appearance in Super Bowl VI, but lost to the Dallas Cowboys. The following year, the Dolphins completed the NFL's only perfect season culminating in a Super Bowl win. The 1972 Dolphins were the third NFL team to accomplish a perfect regular season, and won Super Bowl VIII, Miami also appeared in Super Bowl XVII and Super Bowl XIX, losing both games.

The Tampa Bay Buccaneers began in 1976 as an expansion team of the NFL. They struggled at first, losing their first 26 games in a row to set a league record for futility. After a brief taste of success in the late 1970s, the Bucs again returned to their losing ways, and at one point lost 10+ games for 12 seasons in a row. The hiring of Tony Dungy in 1996 started an improving trend that eventually led to the team's victory in Super Bowl XXXVII in 2003 under coach Jon Gruden. Tampa has hosted four Super Bowls: Super Bowl XVIII ( 1984), Super Bowl XXV ( 1991), Super Bowl XXXV ( 2001), and Super Bowl XLIII ( 2009). The first two events were held at Tampa Stadium, and the other two at Raymond James Stadium.

The Jacksonville Jaguars joined the NFL as an expansion team in the 1995 season; they play their home games at EverBank Field. [2] In 2005, Jacksonville hosted Super Bowl XXXIX.

The Tampa Bay Vipers began play in the XFL in February 2020; they play their home games at Raymond James Stadium.

The Orange Bowl is a major college football bowl, held at the Miami metropolitan area since 1935, currently as a member of the College Football Playoff. The Miami metro area has hosted the Super Bowl a total of ten times (five Super Bowls at Hard Rock Stadium, including Super Bowl XLI and five at the Miami Orange Bowl), tying New Orleans for the most games.[ citation needed]

Jacksonville hosts the Florida–Georgia game, an annual college football game between the University of Florida and the University of Georgia since 1933, as well as the Gator Bowl, a post-season college bowl game since 1946.

The Miami Marlins of Major League Baseball began play in the 1993 season. They won the World Series in both seasons they qualified for the postseason, doing so in 1997 and 2003.

The Tampa Bay Rays began playing in 1998 at Tropicana Field in St. Petersburg. After a decade of futility, the Rays won the 2008 American League Pennant and made it to the World Series.

Before Florida had its first NBA franchise, the Miami Floridians, later in their history known as The Floridians, played in the American Basketball Association from 1968 through 1972.

The Miami Heat of the National Basketball Association was formed in 1988 as an expansion team. They have won three league championships (in 2006, 2012 and 2013), plus six conference titles.

The Orlando Magic began playing in NBA in 1989 as an expansion franchise. They have won the Eastern Conference championships in 1995 and 2009.

The Miami Screaming Eagles co-founded the World Hockey Association in 1971, but never played due to a lack of a suitable arena.

The Florida Panthers of the National Hockey League was founded in 1993 as an expansion team. It originally played at the Miami Arena, and moved to the BB&T Center in 1998. They have made one appearance in the Stanley Cup Finals in 1996.

After over a decade without an MLS team, Orlando City SC joined the league in 2015 after five seasons as a second-level team. The team played its first two MLS seasons at the venue now known as Camping World Stadium before opening Orlando City Stadium, now known as Exploria Stadium, in 2017. Orlando City's reserve side, Orlando City B, began play in the league now known as the USL Championship in 2016, suspended play after the 2017 season, and resumed play in 2019 as a founding member of the third-level USL League One. In 2016, the Orlando Pride, operated by Orlando City, began play in the National Women's Soccer League. They have played at the same venue as their parent club throughout their history ever since.

Miami's MLS team, Inter Miami CF, is owned by David Beckham and began league play in 2020. Inter Miami placed its own reserve side in USL League One in 2020. Miami's other professional team, Miami FC, was founded in 2016 and currently play in the USL Championship. The team initially played in the North American Soccer League, then transitioned into the National Premier Soccer League, before a season in the National Independent Soccer Association, before making the jump to the Division II USL where it plays today. The Miami Fusion played in MLS from 1998 to 2001, winning the Supporters' Shield in their last season before folding.

Tampa Bay previously fielded two Division I soccer teams. The Tampa Bay Rowdies of the original North American Soccer League began play in 1975, drawing good crowds and winning Soccer Bowl '75, but the team and the league ultimately folded. The Tampa Bay Mutiny operated in MLS from the league's inaugural 1996 season until the team folded after the 2001 MLS season.

NASCAR (headquartered in Daytona Beach) begins all three of its major auto racing series in Florida at Daytona International Speedway in February, featuring the Daytona 500, and ends all three Series in November at Homestead-Miami Speedway. Daytona also has the Coke Zero 400 NASCAR race weekend around Independence Day in July. The 24 Hours of Daytona is one of the world's most prestigious endurance auto races.

The 12 Hours of Sebring sports car endurance race is the second largest sporting event in the State of Florida. Each year drawing a total of over 100,000+ fans. It is held in Sebring, Florida at the Sebring International Raceway on the third week of March each year. It is one of the most prestigious car races in the world. Sebring International Raceway's legendary 12-hour endurance race was voted the fourth best auto race of the world's motorsports races in the USAToday 10Best competition. First run in 1952, the world's leading drivers and manufacturers have competed at the 12 Hours of Sebring for over six decades. The race attracts drivers and fans from all over the world.

The Gainesville Raceway hosts the annual Gatornationals, one of the major NHRA drag events.

Florida's universities have a number of National Collegiate Athletic Association programs, especially the Florida State Seminoles and Miami Hurricanes of the Atlantic Coast Conference, and the Florida Gators of the Southeastern Conference. Other notable college teams are the Florida Atlantic Owls, FIU Panthers, UCF Knights and South Florida Bulls.

Previously, the Miami Sol played at the Women's National Basketball Association from 2000 to 2002.

Orlando is the home city of two major league professional sports teams — the Orlando Magic of the National Basketball Association (NBA), and Orlando City SC of Major League Soccer (MLS). Also, the Orlando Pride has competed in the National Women's Soccer League since 2016.

Orlando also has two minor league professional teams — the Orlando Solar Bears ECHL ice hockey team, and the Orlando Anarchy of the Women's Football Alliance. From 1991 to 2016, it was also home to the Orlando Predators of the Arena Football League and during 2019 it was home of the Orlando Apollos of the Alliance of American Football.

From 1999 to 2002, the Orlando Miracle competed in the Women's National Basketball Association before relocating to the Mohegan Sun casino in Connecticut as the Connecticut Sun.

Jacksonville is home to one major league sports team, the Jacksonville Jaguars of the National Football League (NFL).