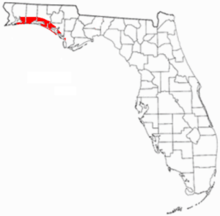 Emerald-green waters at St. Andrews State Park, near the eastern edge of the Emerald Coast

Pensacola Beach, the western part of the Emerald Coast

The Emerald Coast is an unofficial name for the coastal area in the US state of Florida on the Gulf of Mexico that stretches about 100 mi (161 km) through five counties, Escambia, Santa Rosa, Okaloosa, Walton, and Bay, which include Pensacola Beach, Navarre Beach, Fort Walton Beach, Destin, and Panama City. Some south Alabama communities on the coast of Baldwin County, such as Gulf Shores, Orange Beach, and Fort Morgan embrace the term as well.

In 1952, this stretch of coast was dubbed the "Miracle Strip" by Claude Jenkins, a local journalist. The term was reflected in the former Miracle Strip Amusement Park, its successor Miracle Strip at Pier Park and other local businesses. [1] [2] The name "Miracle Strip" was officially adopted by thirty-five officials and members of three district Florida Motor Courts Association chapters on March 14, 1956, at a meeting held at the Staff Restaurant in Fort Walton Beach, for the 100-mile stretch of scenic Highway 98's "fabulous string of motels, hotels and nightspots" from Pensacola to Panama City. Members included representatives of local chambers of commerce. [3]

According to the Daily News, the term Emerald Coast was coined in 1983 by a junior high school student, Andrew Dier, who won $50 in the contest for a new area slogan. [4] Since then, the term has been expanded by popular usage to cover all of the northwest coast of Florida from Pensacola Beach to Panama City Beach.

The area and particularly the beaches along the Emerald Coast from Pensacola to Panama City are also referred to as the "Redneck Riviera", alluding to the strong Southern culture of the hinterland. The Flora-Bama in Perdido Key at the Alabama border is a bar and music venue with a diverse Southern clientele. [5]

Beach in Destin, at the center of the Coast

The area is a family drive destination, attracting tourists from across the Southern United States due to its close proximity. The Emerald Coast is a three-hour drive east of New Orleans. [5] In the first decade of the 21st century, the popularity of the Emerald Coast expanded greatly, leading to new construction and rapid growth. [6] Many development communities similar to Seaside sprang up in the southern part of Walton County and at the western end of Panama City Beach, raising property values.

On 15 October 2019, the Okaloosa Board of County Commissioners approved a new “destination logo” that the Tourist Development Council had recommended, to be introduced in the TDC's new marketing campaign beginning in January 2020. The “Emerald Coast” will be dropped for a simplified logo reading Destin Fort Walton Beach, Florida. This aligns with the renaming of the Northwest Florida Regional Airport to the Destin–Fort Walton Beach Airport in February 2015. [8]

The well-established military presence in the region has led to many film appearances, the earliest being the practice takeoff runs by Doolittle Raiders for Thirty Seconds Over Tokyo, shot at Peel Field, an auxiliary field at Eglin Field, in 1944. Some scenes in the 1949 film Twelve O'Clock High, another film about World War II, were also shot at Eglin.

The 1972 eco-horror film Frogs was filmed in Walton County, Florida, in and around the Wesley House, an old southern mansion located in Eden Gardens State Park in the town of Point Washington, situated on Tucker Bayou off Choctawhatchee Bay.

Exterior shots and several interior scenes for 1998's The Truman Show were filmed in Seaside. [9]

The majority of scenes for Jaws 2 (1978) were filmed in the region, in the Navarre area. Interiors for the youth's pinball hang-out were filmed in Fort Walton Beach at the now-razed original location of Hog's Breath Saloon on Okaloosa Island, and Bruce the Shark's control sled was placed on the bottom of the Gulf off Navarre Beach and the mainland community of Navarre.

"Redneck Riviera" is the title of a song by Tom T. Hall (from his 1996 album Songs from Sopchoppy) about this region and the nearby Forgotten Coast. The song's lyrics include:

Parts of John Grisham's book The Whistler (2016) take place in and around the Emerald Coast.