St. Cloud is a city in northern Osceola County, Florida, United States. It is on the southern shore of East Lake Tohopekaliga in Central Florida, about 26 miles (41.8 km) southeast of Orlando. The population was 35,183 in the 2010 census, and 54,579 in the 2019 census estimate. [8] The city is part of the Orlando–Kissimmee–Sanford metropolitan area.

St. Cloud was founded as a retirement community for Civil War union veterans, and gained the nickname "The Friendly Soldier City". [9] 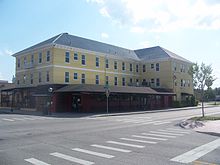 During the 1870s, Hamilton Disston of Philadelphia took an interest in developing the region while on fishing trips with Henry Shelton Sanford, founder of the city of Sanford. Disston contracted with the Florida Internal Improvement Fund, then in receivership, to pay $1 million to offset its Civil War and Reconstruction debt. In exchange, Disston was awarded half the land he drained from the state's swamps. He dug canals and, in 1886–87, established St. Cloud sugarcane plantation, named after St. Cloud, Minnesota, although many longtime locals claim the town was named after Saint-Cloud, France. [10]

Disston opened the Sugar Belt Railway to the South Florida Railroad in 1888 to carry his product to market. But the Panic of 1893 dropped land values, and the Great Freeze of 1894-95 ruined the plantation. Disston returned to Philadelphia, where he died in 1896. The Sugar Belt Railway merged into the South Florida Railroad. An attempt to cultivate rice in the area failed, and for several years the land remained fallow. Then in 1909, the Seminole Land & Investment Company acquired 35,000 acres (14,000 ha) as the site for a Grand Army of the Republic veterans' colony. St. Cloud was selected because of its "health, climate and productiveness of soil." It was first permanently settled in 1909 by William G. King, a real estate manager from Alachua County who had been given the responsibility "to plan, locate and develop a town."

On April 16, 1909, the Kissimmee Valley Gazette announced the "New Town of St. Cloud", a "Soldiers Colony" near Kissimmee. The newspaper called the Seminole Land and Investment Company's purchase "one of the most important real estate deals ever made in the State of Florida." It was reported that the company had searched all over Florida for the perfect site for a veterans' colony, particularly one suited for "health, climate, and productiveness of the soil". It is believed that many of the streets were named for states from which the Civil War veterans had served, but the street names were already assigned to the platted land before settlement occurred. [11]

On June 1, 1915, the Florida Legislature incorporated St. Cloud as a city. Its downtown features landmark buildings by the Orlando architectural firm Ryan & Roberts, a partnership consisting of two women. The buildings by Ryan and Roberts and others downtown are predominantly Spanish Revival. [12]

St. Cloud has tried to separate itself from neighboring cities, and particularly the theme parks, by promoting an image of small-town life, and by attempting to make itself economically less dependent on Kissimmee. On March 6, 2006, St. Cloud introduced CyberSpot, a program that gives residents free high-speed wireless Internet access. The city then ended Cyberspot, claiming it was too costly. The city is served by the Osceola Library System.

According to the United States Census Bureau, the city has a total area of 9.2 square miles (24 km2), of which 0.11% is water. St. Cloud is on the southern shore of East Lake Tohopekaliga, an exceptionally clear lake, with good visibility to depths of 7 to 9 feet (2.1 to 2.7 m). East Lake is nearly circular in shape and covers approximately 12,000 acres (49 km2). It is a perfect example of what is often called a "dish-pan" lake. It produces many trophy bass annually. A familiar sight along the shores of East Lake Toho is the rare, protected Florida sandhill crane.

The major highway is U.S. Route 192 running in tandem with U.S. Route 441 east and west. This six-lane road is intersected by avenues running north and south. Many have names of US states in no particular order. [13] 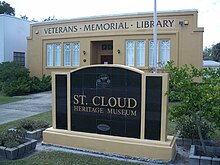 Play (and film) based in St. Cloud