East Florida (Spanish: Florida Oriental) was a colony of Great Britain from 1763 to 1783 and a province of Spanish Florida from 1783 to 1821. Consisting of peninsular Florida, East Florida was founded as a colony by the British colonial government in 1763, with its capital at St. Augustine, which had been the capital of Spanish La Florida.

Britain formed East and West Florida out of territory it had received from Spain and France following the French and Indian War (the Seven Years' War). Finding its new acquisitions in the southeast too large to administer as a single unit, the British divided them into two colonies separated by the Apalachicola River. East Florida comprised the bulk of what had previously been the Spanish territory of Florida.

Britain ceded both Floridas to Spain following the American Revolutionary War. Spain maintained them as separate colonies, although the majority of West Florida was gradually occupied and annexed by the United States from 1810 to 1813. Spain ceded East Florida and the remainder of West Florida to the U.S. in the Adams–Onís Treaty of 1819. In 1822 the United States organized them as a single unit, the Florida Territory. 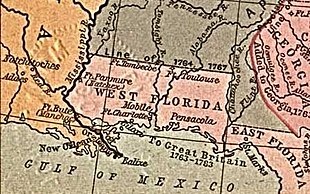 Under the terms of the 1763 Treaty of Paris, which ended the Seven Years' War (the French and Indian War), Spain ceded Spanish Florida to Britain. At the same time, Britain received all of French Louisiana east of the Mississippi River, with the exception of New Orleans, from France. Determining the new territory too large to administer as one unit, Britain divided its new southeastern acquisitions into two new colonies separated by the Apalachicola River: East Florida, with its capital in the old Spanish city of St. Augustine, and West Florida, with its capital at Pensacola.

Perhaps it is strange to think of such dissimilar geographic areas with such opposing climates as having much in common. But if one considers naval and military strategy, one can see that these areas have a common significance, especially when viewed from London by the ministry. Halifax (Nova Scotia) was the command post for both the admiral and general in charge of the American forces.... St. Augustine evoked the same strategic considerations. These posts have been described as the two centers of strength to which the British army was withdrawn in the late 1760s. [1]

The apportionment of lands in the new colonies fell to the same group of English and Scottish entrepreneurs and merchant interests, led chiefly by the Englishman Richard Oswald, later a diplomat, and the British general James Grant, who would later become governor of East Florida. A list of the grantees in both Florida and Canada show that the plums fell to a well-connected—and inter-connected—group. Lincoln's Inn barrister Levett Blackborne, grandson of Sir Richard Levett, a powerful merchant and Lord Mayor of London, came in for grants of 20,000 acres (81 km2) in both locales, for instance. Other aristocrats, nobles and merchants did the same.

The most powerful lubricant between the East Florida speculators and the Nova Scotia speculators was Col. Thomas Thoroton of Flintham, Nottinghamshire. Thoroton, the stepbrother of Levett Blackborne, had married an illegitimate daughter of the Duke of Rutland and often lived at Belvoir Castle, where he acted as principal agent to the Duke, who, along with his son the Marquis of Granby, were heavily involved in overseas ventures. Thoroton frequently acted as the go-between for Richard Oswald and James Grant, particularly after those two gave up their Nova Scotia Grants to focus on East Florida, where a drumbeat of steady speculation (particularly from Dr. Andrew Turnbull and Dr. William Stork) had fanned the flames of interest in London. [1] It was not until March 1781 that the Governor of East Florida, Patrick Tonyn, called elections for a provincial legislature. [2]

Both Floridas remained loyal to Great Britain during the American War of Independence. Spain participated indirectly in the war as an ally of France and captured Pensacola from the British in 1781. In the 1783 Treaty of Paris, which ended the war, the British ceded both Floridas to Spain. The same treaty recognized the independence of the United States, directly to the north.

Map of East and West Florida in 1819, the year that Spain ceded Florida to the United States by the Adams–Onís Treaty

Under Spanish rule, the provinces of East Florida and West Florida initially remained divided by the Apalachicola River, the boundary established by the British. [3] [4] [5] But Spain in 1785 moved it eastward to the Suwanee River. [6] [7] [8]

"Under Spanish rule, Florida was divided by the natural separation of the Suwanee River into West Florida and East Florida."—University of Florida

Spain continued to administer East and West Florida as separate provinces. The Spanish offered favorable terms for acquiring land, which attracted many settlers from the newly formed United States. There were several territorial disputes between the US and Spain, some resulting in military action.

An American army under Andrew Jackson invaded East Florida during the First Seminole War. Jackson's forces captured San Marcos on 7 April 1818; as well as Fort Barrancas at West Florida's capital, Pensacola, on 24 May 1818.

James Monroe's Secretary of State, John Quincy Adams, defined the American position on this issue. Adams accused Spain of breaking Pinckney's Treaty by failing to control the Seminoles. Faced with the prospect of losing control, Spain formally ceded all of its Florida territory to the US under the Adams–Onís Treaty in 1819 (ratified in 1821), in exchange for the US ceding its claims on Texas and the US paying any claims its citizens might have against Spain, up to $5,000,000.

In 1822, the US Congress organized the Florida Territory. In 1845, Florida was admitted as the 27th state of the United States.