Lake Mary is a suburban city that is located in the Greater Orlando metropolitan area in Seminole County, Florida, United States, and is located in Central Florida. The population was 13,822 at the 2010 census.

Lake Mary began its life as an agricultural community and was developed by a tight-rope walker and chemist named Frank Evans, who first came there in 1882. The city incorporated in August 1973. [5] Rated by Money magazine as the #4 best place to live in America in the August 2007 issue. It had its city hall created in 1946. It currently has a history museum in the Lake Mary Chamber of Commerce Building. [6] 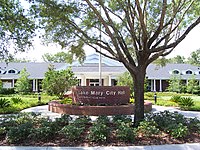 Lake Mary is part of the Orlando–Kissimmee–Sanford Metropolitan Statistical Area, and is approximately 19 miles from Orlando, Florida.

There were 4,199 households, out of which 38.4% had children under the age of 18 living with them, 70.8% were married couples living together, 6.5% had a female householder with no husband present, and 22.1% were non-families. 16.9% of all households were made up of individuals, and 5.8% had someone living alone who was 65 years of age or older. The average household size was 2.72 and the average family size was 3.08.

The American Automobile Association, AAA, National Office is located in Lake Mary and is one of the largest business employers in the area. Also located in Lake Mary is the new Verizon Financial Center, Mitsubishi-Hitachi Power Systems along with multiple other nationally known companies. On a smaller scale, Scholastic Book Fairs, the book fair division of Scholastic Corporation, is headquartered in Lake Mary. In addition, the Orlando TV stations WTGL as well as WOFL and sister station WRBW (by way of Fox Television Stations) have studios located in Lake Mary. All of these are visible along Interstate 4. Prior to Emmis Communications selling WKCF to Hearst-Argyle (now Hearst Television), WKCF's studios were located in the studios that is now the studios of WTGL, before moving with now-sister station WESH in Winter Park.

According to the City's 2011 Comprehensive Annual Financial Report, [11] the top employers in the city are: