From Wikipedia, the free encyclopedia
Historic railroad in Central Florida

The South Florida Railroad was a railroad from Sanford, Florida, to Tampa, Florida, becoming part of the Plant System in 1893 and the Atlantic Coast Line Railroad in 1902. It served as the southernmost segment of the Atlantic Coast Line's main line. The line remains in service today and is now part of the Central Florida Rail Corridor in the Orlando metro area. The rest of the line remains under the ownership of CSX Transportation as part of their A Line.

The Lake Monroe and Orlando Railroad was organized in 1875 with a charter to build from the St. Johns River port of Sanford south to Orlando. The South Florida Railroad was incorporated on October 16, 1878, but was unable to obtain a charter until December 9, 1879, when it took over the charter of the Lake Monroe and Orlando, which was in danger of losing its land grants. The South Florida first ran on November 11, 1880, running the short distance between Sanford and Orlando. However the company had plans to continue to the Gulf of Mexico, reaching it at Tampa. 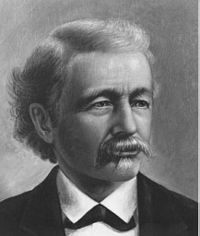 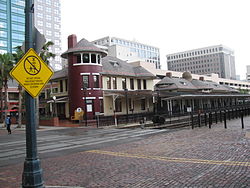 Thus two railroads remained in a race towards Tampa - the South Florida and the Florida Transit and Peninsular Railroad. The South Florida managed to get there first, and obtained the best ports (now known as Port Tampa). The South Florida's original passenger depot in Tampa was located on the east side of the intersection of Ashley and Madison Streets. [1] The Tampa end opened on December 10, 1883, and on January 25, 1884 service began over the full line, built to 3 ft (914 mm) narrow gauge. On February 20, 1886 the 4 ft 8 1⁄2 in (1,435 mm) standard gauge Jacksonville, Tampa and Key West Railway opened to Sanford, and the South Florida was converted to standard gauge on September 22.

In 1893 the Savannah, Florida and Western Railway ( Plant System) directly acquired the South Florida. Henry Plant died in 1899, which led his heirs to sell the Plant System to the Atlantic Coast Line Railroad in 1902. The Atlantic Coast Line would then designate the South Florida Railroad main line (along with the main line of the Jacksonville, Tampa and Key West Railway and other railroads to the north) as their nearly 900-mile main line from Richmond, Virginia to Tampa. [2]

In 2011, CSX sold the line from Poinciana north (as well as part of the former Jacksonville, Tampa and Key West Railway) to the Florida Department of Transportation. This state-owned segment is now known as the Central Florida Rail Corridor, which makes up a vast majority of the track that the SunRail commuter rail service operates on. SunRail began operation on May 1, 2014 from Sand Lake Road north to DeBary and extended service south to Poinciana on July 30, 2018. SunRail also revived passenger service to the South Florida Railroad's historic Church Street Station in Downtown Orlando.

When completed in 1884, the South Florida Railroad's main line ran from Sanford southwest through Orlando and Lakeland to Tampa, terminating at Port Tampa. The main line today runs south of and roughly parallel to Interstate 4. Some of the towns along the line were named for railroad officials. Plant City was named for Henry Plant, and Haines City was named for Colonel Henry Haines, who organized the construction of the line and was considered to be Plant's most trusted employee. [3] [4]

The main line remains in service and is today the southernmost segment of CSX's A Line and the Central Florida Rail Corridor. The line now operates in the following segments:

Amtrak continues to operate passenger service on the line and uses it to reach Tampa Union Station. Amtrak's Miami-bound trains also travel the line to Auburndale and turn south on to the Auburndale Subdivision.

Prior to the sale of the north end of the line to FDOT, the line was part of CSX's Sanford Subdivision from Auburndale north. Since the sale, CSX only operates local freight on the Central Florida Rail Corridor. Freight service on the CFRC is based out of Taft Yard in Pine Castle, which CSX still owns. All of CSX's through freight traffic to northern Florida now uses the adjacent S Line. The Florida Central Railroad, which connects to the Central Florida Rail Corridor in Downtown Orlando, also has freight trackage rights from its connection south to Taft Yard. [5]

Part of the agreement worked out by Henry Plant between the South Florida and the Florida Southern Railway specified that the South Florida would build the north-south Pemberton Ferry Branch. This branch began at a junction with the Florida Southern at Pemberton Ferry (known today as Croom), running south-southeast across the mainline at Lakeland to Bartow. South of Bartow, the Florida Southern continued to Punta Gorda, using trackage rights over the branch. The branch was completed in September 1884. Once the Bone Valley phosphate district was discovered near Lakeland, pressure increased to standard-gauge the line, and that was done on August 7, 1891. [2]

After the Plant System bought the South Florida, an extension was built north from Pemberton Ferry to Inverness, where the Plant System's Silver Springs, Ocala and Gulf Railroad continued north, which was completed in 1891. [2]

The line is also notable for being the location of the Great Train Wreck of 1956 in Pineola (just north of Pemberton Ferry), which was head-on collision between two Atlantic Coast Line Railroad freight trains on October 18, 1956, a killing five crewmen. A signpost at the site of the crash on the Withlacoochee State Trail memorializes the event. [8]

The branch's north leg is still in service from Lakeland to Owensboro (just southwest of Lacoochee) and the south leg is still in service from the main line to Eaton Park. The abandoned segment north of Owensboro is now part of the Withlacoochee State Trail (which also continues up the abandoned extension to Inverness). [9] The south leg is now an industrial spur. The Fort Fraser Trail today runs along the abandoned right-of way from Eaton Park south to Bartow.

The branch is operated by CSX in the following segments:

The charter specified that the railroad must pass through Bartow; thus the Bartow Branch was built from the mainline at Lake Alfred (Bartow Junction) southwest to Bartow. It opened in 1884 and was standard gauged on September 23, 1886.

In the Atlantic Coast Line era, many of their passenger trains to Fort Myers and Naples would run on the Bartow Branch. [6]

Part of the Bartow branch remains today from Winter Haven south to Gordonville (just northeast of Bartow). This segment is operated by the Florida Midland Railroad. The abandoned segment between Lake Alfred and Winter Haven is now the route of the Chain of Lakes Trail. [10]

The Sanford and Indian River Railroad was chartered in 1881 to run from Sanford southeast to Oviedo and Lake Charm. The South Florida leased it in 1883, and it was standard gauged on September 21, 1886. Today, the route is still in service as CSX's Aloma Spur from Sanford to Winter Springs. The Cross Seminole Trail runs along the former right of way from Winter Springs to Oviedo. [11]

The Apopka Branch was part of the original charter, running from Mayo on the mainline west to the Withlacoochee River via Apopka. The line was never opened by the South Florida, instead partially opening as the Apopka and Atlantic Railroad. It was never a success.

The St. Cloud and Sugar Belt Railway was incorporated in 1888 to connect Kissimmee to St. Cloud and Narcoossee. It was immediately operated by the South Florida, and was merged into it in 1893. Neptune Road runs along some of the former right of way. [12]