Stuart is a city in and the seat of Martin County, Florida, United States. Located on Florida's Treasure Coast, Stuart is the largest of four incorporated municipalities in Martin County. The estimated population is 16,237 according to the most recent United States census estimates. Stuart is the 126th largest city in Florida based on official 2019 estimates from the US Census Bureau. [5] It is part of the Port St. Lucie, Florida Metropolitan Statistical Area.

Stuart is frequently cited as one of the best small towns to visit in the U.S., in large part because of its proximity to the St. Lucie River and Indian River Lagoon. [6] [7]

In the 18th century, several Spanish galleons were shipwrecked in the Martin County area of Florida's Treasure Coast. The multiple wrecks were reportedly the result of a hurricane, and the ships were carrying unknown quantities of gold and silver. Some of this treasure has since been recovered, and its presence resulted in the region's name. 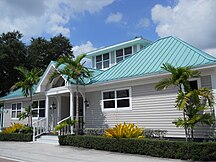 In 1832, pirate Pedro Gilbert, who often used a sandbar off the coast as a lure to unsuspecting prey, chased and caught the Mexican, a U.S. merchant ship. Although he attempted to burn the ship and kill the crew, they survived to report the incident, ultimately resulting in the capture and execution of Gilbert and his crew. The bar from which he lured his intended booty is named "Gilbert's Bar" on nautical charts. [8]

The Treasure Coast area that became Stuart was first settled by non-Native Americans in 1870. In 1875, a United States Lifesaving Station was established on Hutchinson Island, near Stuart. Today, the station is known as Gilbert's Bar House of Refuge and is on the National Register of Historic Places.

From 1893–1895, the area was called Potsdam. This name was chosen by Otto Stypmann, a local landowner originally from Potsdam, Germany. Stypmann, with his brother Ernest, owned the land that would become downtown Stuart. Potsdam was renamed Stuart in 1895, after the establishment of the Florida East Coast Railway, in honor of Homer Hine Stuart Jr., another local landowner.[ citation needed]

When Stuart was incorporated as a town in 1914, it was located in Palm Beach County. In 1925, Stuart was chartered as a city and named the county seat of the newly created Martin County. [9]

The city of Stuart is known as the Sailfish Capital of the World, because of the many sailfish found in the ocean off Martin County.

According to the Köppen climate classification, Stuart has a tropical rainforest climate (Af), with hot, humid summers, with frequent rainfall, and warm, dry winters. Stuart has a noticeably seasonal precipitation pattern, with June through September being the wettest months, and the dry season from November through April.[ citation needed] For the climate map of the University of Melbourne, the city is the southern boundary on the Florida's east coast of humid subtropical climate (Cfa) according to the data used. The southern tip of Stuart can be framed as a tropical monsoon climate (Am) in the vicinity of Seabranch Preserve State Park. [11] [12]

Summers (May through October) feature with hot temperatures, intense sun, and frequent (daily) thundershowers that build in the daytime heat. High temperatures are typically in the upper 80s to low 90s. The city's coastal location prevents temperatures from becoming very hot, though heat indices are often over 100 °F (38 °C). There are 76 days of 90+ °F highs annually. On average, 96 °F (36 °C) is the highest temperature recorded each summer. Late summer brings an increased threat of tropical storms and hurricanes, though landfalls are rare. Several major hurricanes have impacted Stuart since 1900, with Hurricane David in 1979 and hurricanes Frances and Jeanne caused moderate damage to the area in 2004.[ citation needed]

Winter (November through April) or the dry season brings much cooler and drier air masses, and humidity and dew points fall considerably. Winters can become quite dry, and by late winter (March) there is often high fire danger and even residential water use restriction. Average daytime highs in the winter/dry season are from 73 °F (23 °C) to 77 °F (25 °C), though occasional strong cold fronts bring brief rainfall followed by cooler temperatures, with highs in the 50s °F for a few days each winter. Low temperatures fall rarely fall below 40 °F (4 °C), and most winters are frost-free. The first cold front of the season usually occurs in October or November, when the first low below 60 °F (16 °C) usually occurs. Though weather during this time is generally more mild, mid winter highs can still hit 80 °F (27 °C) or higher on occasion.[ citation needed]

A Martin County Youth Climate Strike took place in December 2019, and the City of Stuart has declared 2020 the Year of Climate Action. [13]

There were 7,220 households out of which 15.0% had children under the age of 18 living with them, 34.7% were married couples living together, 9.7% had a female householder with no husband present, and 52.6% were non-families. 46.1% of all households were made up of individuals and 26.1% had someone living alone who was 65 years of age or older. The average household size was 1.88 and the average family size was 2.60.

Stuart hosts one of the two Florida Department of Health offices in Martin County, the other being in Indiantown. [16]

According to the City's 2011 Comprehensive Annual Financial Report, [17] the top employers in the Stuart area are: 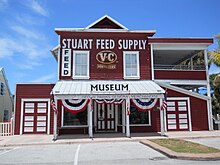 Public education in Stuart is administered by the Martin County School District.

Witham Field is a public-use airport located one mile southeast of the central business district.

Local transit is provided by the county. [19]

Until 1968 the Florida East Coast Railway operated Jacksonville to Miami service, with a station stop in Stuart. In 1961 service consisted of three long-distance trains a day, in each direction, traveled along the route, from Jacksonville to Miami, with trains originating in Chicago or New York City. This was supplemented by a local train that ran from New Smyrna Beach to Miami.

In 1973, the movie Little Laura and Big John, a highly fictionalized version of the true story of John Ashley and Laura Upthegrove, was filmed in Stuart. [20]