Fort Pierce is a city in and the county seat of St. Lucie County, Florida, United States. The city is part of the Treasure Coast region of Atlantic Coast Florida. [5] It is also known as the Sunrise City, [6] sister to San Francisco, California, the Sunset City. The population was 41,590 at the 2010 census. As of 2018, the population recorded by the U.S. Census Bureau was 46,071. [3] It was named after the Fort Pierce Army post which was built nearby in 1838 during the Second Seminole War. The military post had been named for Benjamin Kendrick Pierce, a career United States Army officer and the brother of President Franklin Pierce. [7]

Fort Pierce was awarded the 2005 City of Excellence Award by the Florida League of Cities for overall excellence in city government and in 2011, Main Street Fort Pierce, Inc. received the Great American Main Street Award from the National Trust for Historic Preservation in downtown. [8]

The initial construction of the project occurred in 1971 and the ninth nourishment was completed in May 2013. Completion of plans and specifications, advertisement and award for the 10th renourishment contract were completed in FY 2014. The project was scheduled to start mid-February 2015. Sand for the project is dredged from an approved offshore borrow area known as the Capron Shoal and then pumped via a pipeline onto the 1.3 miles of beach south of the Fort Pierce Inlet. The sponsor, St. Lucie County, is preparing a General Reevaluation Report (GRR) for the project at their own expense that will evaluate extending Federal participation for an additional 50 years. Current Federal participation expires in 2020. [10]

The U.S. Army Corps of Engineers estimates the total cost of the project to be $75.9 million, with an estimated U.S. Federal Government share of $46.4 million. No funding for the project was requested by the U.S. President from the U.S. Congress in Fiscal Year 2016. [10]

The Experimental Oculina Research Reserve preserves the Oculina Banks, a reef of ivory bush coral (Oculina varicosa) off the coast of Fort Pierce, Florida. In 1984, a 92 square-nautical-mile (316 km²) portion of these reefs was designated the "Oculina Habitat Area of Particular Concern". In 1994, the area was closed to all manner of bottom fishing and was redesignated as a research reserve. In 2000, the marine protected area was expanded to 300 square nautical miles (1,030 km²) and prohibited all gears that caused mechanical disruption to the habitat. The city is also known for its large manatee population.

Due to the devastation caused at the Fort Pierce City Marina by hurricanes Frances and Jeanne in 2004, FEMA mandated a plan to ensure that the rebuilt facility would be protected from future such events before FEMA would release funding for the repairs. Starting in 2012, construction began to create 12 artificial barrier islands including oyster beds, lime rock artificial reefs, mangrove fringes and coastal dune. The "core" of the islands was constructed of TITANTubes, sometimes referred to as geotextile tubes or geotubes, manufactured by Flint Industries and covered by a coastal marine mattress and then armor stone. The project was completed in 2013 after six years of planning, permitting and construction and a cost of $18 million.

The city of Fort Pierce has a council–manager government form of local government. The offices of commissioner and mayor are nonpartisan, and have a term of four years.

The climate of Ft. Pierce is generally a humid subtropical climate, although it closely borders a tropical monsoon and a tropical savannah climate. Summertime temperatures range between 80 and 100 degrees F. Temperatures in the winter range between 55 and 80 degrees F, although some winter days can drop down below 40 degrees, but rarely fall below freezing.

Fort Pierce is located on U.S. Route 1, near its intersection with Florida Route 70. Interstate Route 95 and Florida's Turnpike are nearby, at the west edge of town. The Intracoastal Waterway passes through the city. The nearest airport with scheduled passenger service is in Melbourne; the closest major airport is in West Palm Beach. [16]

Fort Pierce is served by the St. Lucie Transportation Planning Organization (TPO). [17] The TPO is a Metropolitan Planning Organization (MPO), a federally mandated and federally funded transportation policy-making organization responsible for transportation planning, programming, and financing of State and Federal transportation funds for the City of Fort Pierce. The TPO is governed by a TPO Board, which is composed of elected officials, representatives from the St. Lucie County School Board, and representatives from Community Transit, a division of The Council on Aging of St. Lucie, Inc. [18] The original bus system started as a demand response service bus in the 1990s; it only served St. Lucie County. Soon it expanded to a fixed route system, going to predetermined locations along a route. On June 3, 2002, the Florida Department of Transportation (FDOT) approved funding, expanding the bus service to Martin County, and it became the Treasure Coast Connector. [19] [20]

From 1894 to 1968 the Florida East Coast Railway served the city. Until 1963, several long distance passenger trains from Chicago, Cincinnati and New York City made stops there, en route to Miami. These long distances trains included the Illinois Central Railroad's City of Miami and the Louisville & Nashville Railroad's South Wind both heading from Chicago; and they included the Atlantic Coast Line Railroad's East Coast Champion and the Havana Special, originating from New York. [21] [22] [23] [24]

Amtrak and the Florida East Coast Railway have been planning to make stations along Florida's East Coast. The latter operations would be part of the second phase of the private Virgin Trains USA inter-city rail project. The cities cited by Amtrak and the Florida Department of Transportation include: Stuart, Fort Pierce, Vero Beach, Melbourne, Titusville, Cocoa, Daytona Beach and St. Augustine, Florida. [25] In 2018, Brightline (now Virgin Trains USA) announced that it was looking at downtown properties for a site for a new station for the train between Fort Pierce and Miami. Ultimately, the northwestern terminus would be Orlando, with service beginning in 2021. [26] [27]

According to the U.S. Army Corps of Engineers, an average of 350,000 tons of waterborne commerce moves through Fort Pierce Harbor annually. Major commodities which are dependent on the port include citrus exports, cement and aragonite imports. The last navigation improvements at Fort Pierce were authorized by the U.S. Congress in the Water Resources Development Act of 1988 dated November 17, 1988 and construction was completed in August 1996. The existing entrance channel is 400 feet wide and 30 feet deep, the interior channel is 250 feet wide and 28 feet deep, the existing turning basin is 1,100 feet square and 28 feet deep, and the north access channel is located immediately north of the main turning basin is 1,250 feet long, 250 feet wide and 28 feet deep. [28] 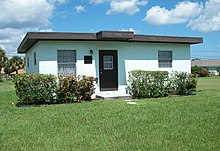