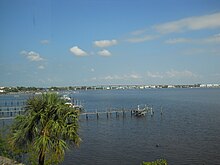 Martin County is a county located in the Treasure Coast region of the state of Florida, in the United States. As of the 2010 census, the population was 146,318. [2] Its county seat is Stuart. [3]

When the county was created, the western contour followed the shore of Lake Okeechobee, as did the borders of Glades, Okeechobee, and Hendry counties. Palm Beach County had historically claimed all of the surface of the lake as part of its area, to its benefit for the distribution of state and federal highway funds. The state representative of Martin County, William Ralph Scott of Stuart, initiated a bill to divide the lake among its adjacent counties, creating a more equitable distribution of state funds for road creation and maintenance. All bordering counties confirmed the justice of this change and supported its ratification, with the exception of Palm Beach County. Representatives from Palm Beach County later presented Representative William Scott with a jug of water, signifying "all the water Bill Scott left Palm Beach County." The jug is in the possession of Stuart Heritage.

According to the U.S. Army Corps of Engineers, the Martin County Shore Protection Project includes nourishment of approximately 3.75 miles of beach extending from the St. Lucie County line south to the Stuart Public Beach Park in Martin County. Included in the project is restoration of the primary dune and a 35-foot-wide protective berm. The renourishment interval for this project is every 7 years. [6]

The last renourishment of the Martin County Shore Protection Project was completed in May 2013 and included a Flood Control and Coastal Emergency component due impacts incurred with the passage of Hurricane Sandy in 2012. The next renourishment event is scheduled for 2019. [6]

Martin County is a non-chartered county and its form of government is prescribed by the Florida Constitution and Florida Statutes, as follows:

Board of County Commissioners 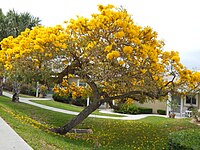 Tabebuia off Savanna Road in Jensen Beach. April 2010. Typical of such trees blooming throughout Martin county in the spring

The Board of County Commissioners is the legislative body of the county and has charge of all county executive and administrative functions, except those assigned by the Constitution to independent county officers or to the independent school district. The board also has some quasi-judicial functions. Some of functions exercised by the board are county-wide, while others are applicable only in the unincorporated areas of the county, where the board has many of the functions of a municipality. The county commissioners are elected by county-wide vote, but each one represents a specific district. The board appoints the county administrator who is responsible to it for the day-to-day operations of the county government. The current county commissioners by district number are:

The elected Constitutional officers are:

The independent Martin County School District has an elected superintendent of schools and school board, as follows:

Martin County is a long-standing Republican stronghold which has not supported a Democrat for the White House since Franklin Delano Roosevelt in 1944.

On the National Register of Historic Places:

Other historic areas listed in 1989 by the Florida Chapter of the American Institute of Architects: [17]

Other places listed in 2012 by the Florida Chapter of the American Institute of Architects in its Florida Architecture: 100 Years. 100 Places. [18]

Downtown Stuart, in the heart of the county seat

Sunset from the Intracoastal Waterway at Hobe Sound