Leon County is a county in the Panhandle of the U.S. state of Florida. It was named after the Spanish explorer Juan Ponce de León. As of the 2010 census, the population was 275,487. [2]

The county seat is Tallahassee, [3] which is also the state capital and home to many politicians, lobbyists, jurists, and attorneys.

Leon County is included in the Tallahassee metropolitan area. Tallahassee is home to two of Florida's major public universities, Florida State University and Florida A&M University, as well as Tallahassee Community College. Together these institutions have a combined enrollment of more than 70,000 students annually, creating both economic and social effects.

Originally part of Escambia and later Gadsden County, Leon County was created in 1824. [4] It was named after Juan Ponce de León, the Spanish explorer who was the first European to reach Florida. [5]

The United States finally acquired this territory in the 19th century. In the 1830s, it attempted to conduct Indian Removal of the Seminole and Creek peoples, who had migrated south to escape European-American encroachment in Georgia and Alabama. After many Seminole were forcibly removed from the area or moved south to the Everglades during the Seminole Wars, planters developed cotton plantations based on enslaved labor.

By the 1850s and 1860s, Leon County had become part of the Deep South's "cotton kingdom". It ranked fifth of all Florida and Georgia counties in cotton production from the 20 major plantations. Uniquely among Confederate capitals east of the Mississippi River, in the American Civil War Tallahassee was never captured by Union forces. No Union soldiers set foot in Leon County until the Reconstruction Era. 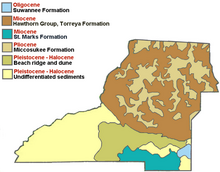 Leon County encompasses basement rock composed of basalts of the Triassic and Jurassic from ~251 to 145 million years ago interlayered with Mesozoic sedimentary rocks. The layers above the basement are carbonate rock created from dying foraminifera, bryozoa, mollusks, and corals from as early as the Paleocene, a period of ~66—55.8 Ma. [7]

During the Eocene (~55.8—33.9 Ma) and Oligocene (~33.9—23 Ma), the Appalachian Mountains began to uplift and the erosion rate increased enough to fill the Gulf Trough with quartz sands, silts, and clays via rivers and streams. The first sedimentation layer in Leon County is the Oligocene Suwannee Limestone in the southeastern part of the county as stated by the United States Geological Survey and Florida Geological Survey. [8]

The Early Miocene (~23.03—15.7 Ma) sedimentation in Leon County is Hawthorn Group, Torreya Formation and St. Marks Formation and found in the northern two-thirds of the county.

The Pliocene (~5.332—2.588 Ma) is represented by the Miccosukee Formation scattered within the Torreya Formation.

Sediments were laid down from the Pleistocene epoch (~2.588 million—12 000 years ago) through Holocene epoch (~12,000—present) and are designated Beach ridge and trail and undifferentiated sediments.

During the Pleistocene, what would be Leon County emerged and submerged with each glacial and interglacial period. Interglacials created the county's topography.

Three sites in Leon County have yielded fossil remnants of the Miocene epoch.

The adult citizens of Leon County enjoy the highest level of education in the state of Florida followed by Alachua County with a total of 67.8%.

Following Reconstruction, white Democrats regained power in Leon County and voters have historically voted for Democratic candidates at the national level. Tallahassee is one of the few cities in the South known for progressive activism.

The county has voted Democratic in 24 of the past 29 presidential elections since 1904. (Until the late 1960s, blacks were essentially disenfranchised in Florida and other Southern states.) Since the civil rights era, Tallahassee has elected black mayors and black state representatives. [16] Its political affiliations likely draw from the high number of students, staff, and faculty associated with Florida State University, Florida A&M University, and Tallahassee Community College in Tallahassee, as well as the concentration of government employees.

Leon County has had the highest voter turnout of any Florida county. In the 2008 general election, it had a record-setting voter turnout of 85%, including early voting and voting by mail. [17]

All of Leon County is represented by Bill Montford (D), District 3, in the Florida Senate.

Leon County is in two congressional districts. Its northern and eastern portion, including 61% of Tallahassee, is part of the 5th Congressional District, a minority-majority district that extends across northern Florida. It is represented by Al Lawson ( D). The remainder of the county (the southeastern corner and 39% of Tallahassee), is part of the 2nd Congressional District, represented by Neal Dunn ( R).

Proponents of consolidation have claimed that the new jurisdiction would attract business by its very size. Merging of governments would cut government waste, duplication of services, etc. Professor Richard Feiock of Florida State University found in a 2007 study that he could not conclude that consolidation would benefit the local economy. [22]

Tallahassee is the only incorporated municipality in Leon County. The Tallahassee Police Department provides its policing. Established in 1826, TPD is the country's third-longest-accredited law enforcement agency. [23]

Florida State University (commonly called Florida State or FSU) is an American public space-grant and sea-grant research university. It has a 1,391.54-acre (5.631-km2) campus in Tallahassee. In 2017, it had nearly 42,000 students. It is a senior member of the State University System of Florida. Founded in 1851, it is on Florida's oldest continuous site of higher education. [24] [25]

The university is classified as a Research University with Very High Research by the Carnegie Foundation for the Advancement of Teaching. [26] It comprises 16 separate colleges and more than 110 centers, facilities, labs and institutes that offer more than 360 programs of study, including professional school programs. [27] The university has an annual budget of over $1.7 billion. [28] Florida State is home to Florida's only National Laboratory, the National High Magnetic Field Laboratory, and is the birthplace of the commercially viable anti-cancer drug Taxol. FSU also operates the John & Mable Ringling Museum of Art, the State Art Museum of Florida and one of the nation's largest museum/university complexes. [29]

FSU is accredited by the Southern Association of Colleges and Schools (SACS). It is home to nationally ranked programs in many academic areas, including law, business, engineering, medicine, social policy, film, music, theater, dance, visual art, political science, psychology, social work, and the sciences. [30] FSU leads Florida in four of eight areas of external funding for the STEM disciplines. [31]

Florida Governor Rick Scott and the state legislature designated FSU one of two "preeminent" state universities in the spring of 2013 among the 12 universities of the State University System of Florida. [33] [34] [35]

FSU's intercollegiate sports teams, commonly called the Seminoles, compete in National Collegiate Athletic Association (NCAA) Division I and the Atlantic Coast Conference (ACC). The athletics programs are favorites of passionate students, fans and alumni across the country, especially when led by the Marching Chiefs of the Florida State University College of Music. In their 113-year history, the Seminoles have won 20 national athletic championships and Seminole athletes have won 78 individual NCAA national championships. [36] 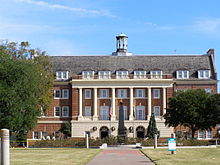 Founded on October 3, 1887, Florida A&M University (FAMU) is a public, historically black university that is part of the State University System of Florida and is accredited by the Southern Association of Colleges and Schools. FAMU's main campus comprises 156 buildings spread over 422 acres (1.7 km2) on top of Tallahassee's highest geographic hill. In 2016 it had more than 9,600 students. FAMU also has several satellite campuses. Its College of Law is at its Orlando site, and its pharmacy program has sites in Miami, Jacksonville and Tampa. FAMU offers 54 bachelor's degrees and 29 master's degrees. It has 12 schools and colleges and one institute. 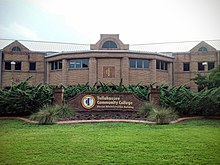 The Florida Legislature founded Tallahassee Community College in 1966. [38] TCC is a member of the Florida College System. It is accredited by the Florida Department of Education and the Southern Association of Colleges and Schools. Its primary site is a 270-acre (1.092 km2) campus in Tallahassee.

The Leon County Public Library was renamed in 1993 to honor LeRoy Collins, the 33rd governor of Florida. [43] 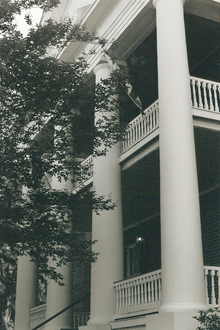 The James Madison Institute (known as "The Columns") was the first home of the Leon County Free Public Library.

The Carnegie Library of Tallahassee, which served only the black community, became the only free public library in the city until 1955. According to the Leon County Public Library's website, the American Association of University Women formed the Friends of the Library organization in 1954. The formation of the Friends of the Library was in direct response to the fact that "Tallahassee was the only state capital in the United States not offering free public library service." [45] A year later, the library was established by legislative action and developed by citizens and civic groups. The first Leon County free public library opened on March 21, 1956. The first building to house the library was The Columns, one of the oldest remaining antebellum homes in the Leon County area, at Park Avenue and Adams Street (now the home of the James Madison Institute).

In order to expand library services, the Junior League of Tallahassee donated a bookmobile to the library. The vehicle was later donated to the Leon County Sheriff's Office to be used as a paddywagon for its Road Prison. In 1962, the library moved to the old Elks Club building at 127 North Monroe Street. Public transit in the city of Tallahassee had been desegregated by 1958, but the public library system was only integrated several years later.

In the early 1970s, Jefferson and Wakulla Counties joined the Leon County Public Library System, forming the Leon, Jefferson, and Wakulla County Public Library System. According to the library's website, "Leon County provided administrative and other services to the two smaller counties, while each supported the direct costs of their library services and their share of Leon's administrative costs." [45] In 1975 the system started a branch library in Bond, a predominantly black community on the city's south side. Wakulla County left the library cooperative in 1975 to start its own library system and in 1978 the main library moved to Tallahassee's Northwood Mall. Jefferson County left the library cooperative in 1980 and the library reverted to the Leon County Public Library. In 1989, "ground breaking was held on March 4 for a new $8.5 million main library facility with 88,000 feet of space. The site was next door to the library's original home, The Columns, which had been moved in 1971 to 100 N. Duval." [45] The new library had its grand opening in 1991 and was renamed in 1993 in honor of former Governor LeRoy Collins.