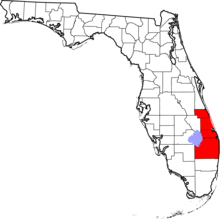 The Treasure Coast is a region of the U.S. state of Florida. It is located on the state's Atlantic coast, comprising Indian River, St. Lucie, and Martin counties. The region, whose name refers to the Spanish Treasure Fleet lost in a 1715 hurricane, evidently emerged from residents' desire to distinguish themselves from Miami and the Gold Coast region to the south.

The area has long been inhabited, but like other of Florida's vernacular regions, a popular identity for the area did not emerge until the area saw its initial population boom in the 20th century. It is one of several "coast" regions in Florida, like the Gold Coast and the First Coast. [1] The term was coined by John J. Schumann Jr. and Harry J. Schultz of the Vero Beach Press Journal newspaper shortly after salvagers began recovering Spanish treasure off the coast in 1961. [2] The discovery of treasure from the 1715 Treasure Fleet, lost in a hurricane near the Sebastian Inlet, was of major local importance and brought international attention to the area. [3] Press Journal publisher Shumann and editor Schultz noted that there was no name for their area, which was between the well known Gold Coast (Palm Beach to Miami to the south) and the Space Coast ( Brevard County to the north). They started referring to their region as the "Treasure Coast" in the newspaper, and this use spread to the community. [2]

Though some local businesses were using the term as early as 1966, it spread fairly slowly. The Miami Herald's 1972 Florida Almanac refers to the area from Miami to Vero Beach as the "Tropical Coast". [2] A 1982 survey of Florida's vernacular regions by geographers Ary J. Lamme and Raymond K. Oldakowski did not include the "Treasure Coast". The survey showed that the entire area from Dade County (now Miami-Dade) north to Martin County was considered the "Gold Coast" at that time. However, a 2007 survey by the same authors found that by then the "Gold Coast" was restricted primarily to Miami-Dade and Broward counties, while the "Treasure Coast" region had emerged describing the area from Palm Beach County northward. Lamme and Oldakowski noted that by that time, "Gold Coast" had acquired some unflattering connotations. They suggest the communities to the north may have seen the need to distinguish themselves from the Gold Coast and Miami to promote their locale as a destination for American tourists and residents, contributing to the current popularity of the Treasure Coast as a vernacular region. [1]

The Anthony J. Catanese Center for Urban and Environmental Solutions at Florida Atlantic University notes that the Treasure Coast is becoming increasingly continuous with the rest of South Florida, with much of its current and projected development being tied to growth in the urban Miami metropolitan area. [4]

The Treasure Coast includes two metropolitan statistical areas designated by the Office of Management and Budget and used for statistical purposes by the Census Bureau and other agencies. These are:

All of the Treasure Coast is shielded from the Atlantic Ocean by narrow sandbars and barrier islands that protect the shallow lagoons, rivers, and bays. Immediately inland, pine and palmetto flatlands are abundant. [8] Numerous lakes and rivers run through the Treasure Coast, notably the well known Indian River, a part of the Indian River Lagoon system. At certain seasons of the year, bridges may impede the red drift algae flow, causing a "rotten egg" hydrogen sulfide odor in the area. The Treasure Coast is also bordered by the Atlantic portion of the Intracoastal Waterway, a stretch of closed water from Brownsville, Texas to Boston, Massachusetts. [9]

Place with more than 100,000 inhabitants

Places with fewer than 1,000 inhabitants

Census-designated places (by population, as of 2010 Census)

Despite Port St. Lucie being the 7th largest city in Florida, there are no airports in the immediate area that offer scheduled passenger flights. One must travel to Melbourne's Orlando Melbourne International Airport to the north (40 miles from Vero Beach) and West Palm Beach's Palm Beach International Airport to the south (35 miles from Hobe Sound). However, there are three small regional airports in the area: Vero Beach Regional Airport in Vero Beach, Treasure Coast International Airport in Fort Pierce, and Witham Field in Stuart. If northern Palm Beach County is included in the Treasure Coast, North County Airport can be included in this list. William P. Gwinn Airport is also located in northern Palm Beach County, but is a private airfield for Pratt & Whitney's Sikorsky Aircraft business unit.

Fort Pierce Harbor, in Fort Pierce, located along the Indian River across from the Fort Pierce Inlet, is a locally significant port for imports and exports.

Despite its large population, the Treasure Coast has only two major north-south highways running through the area: Florida's Turnpike (a toll road) and Interstate 95. Both routes run generally parallel to each other (twice crossing each other), but are mostly located along the extreme western edges of the cities lining the coast. Through the cities themselves, U.S. 1 is the main north-south roadway. Farther east, running along the coast, and often on the barrier island for the region ( Hutchinson Island and Orchid Island), is Florida State Road A1A.

Amtrak and the Florida Department of Transportation have been discussing returning passenger service to the coast. [10] In 2018, Brightline (now Virgin Trains USA), a higher speed train line that will ultimately run between Miami and Orlando, announced that it was looking for sites for a new station between Fort Pierce and Miami. [11] [12] As of November 2019, Stuart is the frontrunner to receive the Brightline station. [13]