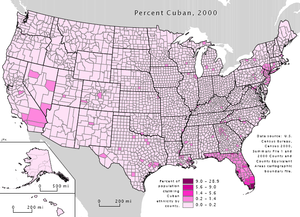 The 2000 U.S. census data on the Cuban population in the United States.

Cuban immigration has greatly influenced modern Miami, creating what is known as "Cuban Miami." However, Miami reflects global trends as well, such as the growing trends of multiculturalism and multiracialism; this reflects the way in which international politics shape local communities. [1]

About 500,000 Cubans, most of them business people and professionals, arrived in Miami during a 15-year period after the Cuban Revolution. Some figures in Fulgencio Batista's administration were among those who arrived in Miami. The Miami Cubans received assimilation aid from the federal government. The Cubans established businesses in Miami. The Cubans arriving after 1980 did so primarily because of economic reasons. [2]

Essentially, the coexistence of growth and internationalization within Miami has perpetuated an ethnically driven social polarization. [3] The growing number of Cubans in Miami have remained loyal to their cultural norms, mores, customs, language, and religious affiliations. The transnational force of immigration defines Miami as a growing metropolis, and the 20th century Cuban influx has greatly affected Miami's growth. [1]

Due to Miami's geographic proximity to Cuba it served as an easy location to migrate to for Cubans who were dissatisfied with poverty, or the various military dictatorships in Cuba. Many affluent Cuban families also sent their children to school in the United States, usually in Miami. Various Cuban political leaders used Miami as a base of operations to organize against the Fulgencio Batista regime. [4]

By 1958 only about 10,000 Cubans lived in Miami, while various affluent Cubans would often visit Miami, even just for the day. The tourist industry in Miami heavily catered to Cuban visitors and tried to offer as many services in Spanish as possible. [4] 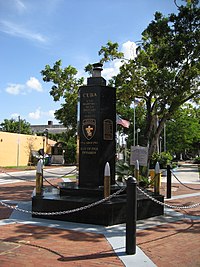 The Bay of Pigs Memorial in Little Havana, Miami

After the Cuban Revolution of 1959 various Cubans began to leave the country. Cubans settled in various places around the United States but many settled in Miami due to its proximity to Cuba and Cuban culture already in the city. Many would live in the neighborhoods of Little Havana or Hialeah, Florida in Miami due to their cheap housing, new jobs, and sometimes their access to Spanish speaking businesses. [5]

As Cubans became more settled in Miami more businesses and media outlets began catering to Spanish speaking audiences. Many non-Hispanic locals began moving out of Miami in a white flight. [5]

Cuban immigration greatly affected Miami's future demographics. For example, the net immigration of African Americans into Miami was reduced during the 1960s in comparison to previous years. [6] This was the result of Cuban immigrants competing for jobs that had often been afforded to African Americans living in Miami. This reduction of immigration of non-Hispanics displayed the growing presence of Cubans in Miami. Miami "posts a low emigration rate-43.6 per 1,000. This, of course, stems from the huge Cuban presence in Dade County and is testimony to the holding power of the Cuban enclave in Miami". [7]

Cubans continued to come to the United States and specifically Miami, especially during the 1994 Cuban rafter crisis and beyond. As Cubans continued to immigrate and become more settled in American society, many Cuban owned businesses began to prosper in the Miami area. [5]

The Bay of Pigs Memorial in Little Havana, Miami

With the emerging importance of ethnicity and the increased effects of segregation, Cubans within Miami attempted to reassert the Spanish language. In Miami, the Spanish language was spoken to a larger extent than in other cities with large Hispanic populations; also it was spoken in more diverse settings in Miami than any other city. [1] The 1970 census revealed that Spanish speakers made up 24 percent of Miami's population. [6] The Spanish language was becoming a norm in Miami as it was more extensively spoken by Miami's Cuban elite. [1] Language became increasingly important in 20th-century Miami as a result of the Cuban influx and this had impacts on other non-Latin communities.

Non-Hispanic communities began to oppose the rise of the Spanish language as a growing force within Miami. This can be seen in the anti-bilingualism/English Only movement. This movement came about in 1980, after a long period of vast Cuban immigration and social reform. Language was becoming a pressing issue as "Miami had the first bilingual public school program in the modern period (1963) and the first English Only referendum (1980)". [8] In fact the debates of English as Dade County's official language led to violent and dangerous riots in the 1980s. [9] Cubans felt that by preserving their language, they were preserving a fundamental component of their culture. In the 2000 census, 59.2% of people in Miami-Dade County said that they spoke Spanish at home. [10]

Although the media in Miami allows a certain amount of cultural labeling to flourish within the community, it also portrays the growing importance and domination of Cuban immigrants. For example, the Miami Herald's June 14, 1996 headline reads "Vanishing Spanish". [3] The headline refers to, and deplores the fact that, only a small percentage of recent high school graduates were fluent in Spanish; whereas the majority of second-generation Cuban immigrants spoke broken Spanish, and only spoke it in the home. [3] "This was described as an alarming trend since it erodes Miami's advantage as a bilingual community and diminishes its economic competitiveness". [3] During the 20th century, many Spanish-language newspapers were founded in Miami. "The Miami Herald created a Spanish-language insert, el Nuevo Herald, in 1976". [11] This addition received a vast amount of support and "by 1981 circulation reached 83,000 on weekdays and 94,000 for weekend editions. el Nuevo Herald is now published as an independent newspaper and reports a weekday circulation of about 100,000. It too is accessible on the World Wide Web ( http://www.elnuevoherald.com). As the Hispanic population has grown and achieved considerable economic success, it has also moved beyond Miami's city limits: Spanish-language newspapers are now published in adjacent Hialeah and Fort Lauderdale. This expansion can be seen at a statewide level as well, for Tampa, Orlando, and Immokalee each have Spanish-language newspapers". [11] Essentially, through the founding and growth of distinctly Hispanic newspapers, Cuban immigrants established a distinctly Latin American media.

Historically the Miami Cuban community has strongly opposed Fidel Castro and has blocked normalization in Cuba-United States relations. The Cubans arriving after 1980 have closer ties to those remaining in Cuba. They tend to take charter flights to and from Miami to Cuba. [2]

As common meeting places, several parks in the greater Miami area reflect the influence of Cuban migration to the community and nod to Cuban culture.

Starting in the early 1970s, community leader and urban planner Jesus Permuy spearheaded the effort to designate a park for the Cuban exile community. [12] The sometimes controversial proposed park was known for much of the almost ten year effort simply as the "Latin Park," and faced some pushback from non-Cuban residents. The park was unanimously approved by the Miami City Commission, however, and finally opened in 1980 [13] as José Martí Park in honor of Cuban icon José Martí.