Celebration is a census-designated place (CDP) and a master-planned community in Osceola County, Florida, United States, located near Walt Disney World Resort and originally developed by The Walt Disney Company. The town, whose population was 7,427 at the 2010 census, is part of the Orlando– Kissimmee Metropolitan Statistical Area. [3]

After founding Celebration, Disney followed its plans to divest most of its control of the town. [4] Several Disney business units continue to occupy the town's office buildings. Walt Disney World operates two utility companies, Smart City Telecom and Reedy Creek Energy Services, that provide services to the town. The town itself is connected to the Walt Disney World resorts via one of its primary streets, World Drive, which begins near the Magic Kingdom.

In the early 1990s, the Disney Development Company (DDC) established the Celebration Company to spearhead its development within about 4,900 acres (20 km2) of land in the southern portion of the Reedy Creek Improvement District. [7] Total investment for the project is estimated at US$2.5 billion. [8]

The master plan was developed by the two Driehaus Prize winners, Cooper, Robertson & Partners and Robert A. M. Stern, and the extensive landscape, parks, trails and pathways were designed by the San Francisco firm EDAW (now AECOM). [9] Urban Design Associates, of Pittsburgh, PA, developed design guidelines, called a Pattern Book, as a tool for the design of new architecture within the community. [10] Celebration is planned in an early 20th-century architectural style and is not zoned for high-density residences. Celebration was named the "New Community of the Year" in 2001 by the Urban Land Institute. [11] Disney hired graphic designer Michael Beirut to design community elements including street signs, retail signage, manhole covers, fountains, golf course graphics, park trail markers, as well as home sales brochures. [12]

The first phase of residential development occurred in the summer of 1996 with Celebration Village, West Village, and Lake Evalyn; this was followed by the North Village, South Village, East Village and Aquila Reserve and the final Artisan Park phases. [13] Later phases included construction by a number of developers, including David Waronker. [14]

Disney CEO Michael Eisner took an especially keen interest in the development of the new town in the early days, encouraging the executives at Disney Development Company to "make history" and develop a town worthy of the Disney brand and legacy that extended to Walt Disney's vision of an Experimental Prototype Community of Tomorrow (EPCOT). DDC executives collaborated extensively with leaders in education, health, and technology in addition to planners and architects to create the vision and operating policies for the town.

Disney attempted numerous efforts to encourage economic and ethnic diversity among residents in the early days of development. The company placed advertisements in newspapers and magazines that catered to African-American and Hispanic demographics, printed brochures featuring racial minorities, and hired African-American workers in the community's sales office. [15] In addition, the owners of the first 350 houses and 123 apartments were chosen by a lottery in an effort to prevent racial discrimination against homebuyers. [15] However, by 2000, it was revealed that the racial makeup of the community was 88 percent white, compared to the surrounding county's 59 percent white population. Demographers partially blamed the lack of diversity on Disney's decision to forego building subsidized housing inside the community, instead opting to donate $900,000 to Osceola County to help area residents buy houses under $80,000, below the market value of most housing in Celebration. [15]

In 2016, The Wall Street Journal reported that Celebration Town Center condominium owners "are battling leaky roofs, balconies that have become separated from the sides of buildings and mold spreading in their walls. Their properties have become so dilapidated, they say, they're having trouble selling them."

An April 2016 civil suit seeks to force the Town Center Foundation, a controlling entity under sole direction of Lexin Capital, "which took control of part of Celebration in 2004, to pay for upward of $15 million to $20 million in repairs" which were deferred over ten years. [16] 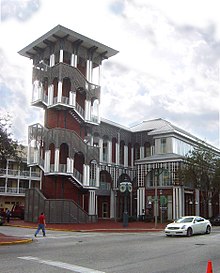 There were 3,063 households, out of which 32.7% had children under the age of 18 living with them, 57.0% were married couples living together, 4.5% had a female householder with no married spouse present, and 35.0% were non-families. 24.3% of all households were made up of individuals, and 3.6% had someone living alone who was 65 years of age or older. The average household size was 2.44 and the average family size was 2.96.

The area is organized under state law as a community development district. As a result, voting is restricted to local landowners. The largest landowners are entities controlled by The Walt Disney Company. [18] 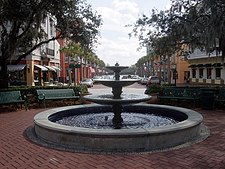 A view of downtown Market Street.

Celebration has six Christian churches, one Jewish congregation, and one hospital ministry. [20]

There are now more than 500 registered companies [21] listed as doing business in the shopping plazas, small office complexes, and the Disney World office building park. This community holds the only Class A office buildings in Osceola County.[ citation needed]

Celebration is separated into areas referred to as "villages." The main village, closest to downtown, is where the first homes were constructed. North Village, closest to U.S. 192, houses the Georgetown Condos as well as Acadia Estate Homes. East Village includes Roseville Corner and Aquila Loop. Lake Evalyn, generally considered its own area of Celebration but not quite its own village, includes a small lake where one can find a multitude of ducks, alligators, and the occasional river otter. South Village houses the Spring Park Loop estate homes and Heritage Hall. Additionally, Siena Condos complete the outer edge of South Village by Celebration Blvd. Mirasol includes condos with concierge service and a day spa. Artisan Park is at the end of Celebration Ave and houses condos, townhomes, single-family residences as well as a clubhouse consisting of a pool, gym, and restaurant.

A gathering in Celebration on Independence Day

Celebration hosts many celebrations every year, including community-wide yard sales, an art show, an exotic car festival, an annual Radio Disney Holiday concert, an Oktoberfest Celebration, the "Great American Pie Festival" (televised on The Food Network), [22] a "Posh Pooch" festival, and downtown events for the Fall and Christmas seasons when autumn leaves and "snow" (small-scale soap flakes) are released into the Town Center. The community also hosts a large Independence Day fireworks celebration. The town events are organized on the Internet by the Community Calendar. [23]

91% of residents who work outside their homes drive to work. [24]

The two main roads going through the center of the Celebration's downtown area are Market Street and Front Street. Other streets in Celebration include:

The School District of Osceola County, Florida, operates public schools in Celebration. [25] Celebration is zoned to the Celebration School for K-8. [26] [27] Celebration High School, located in the city, serves Celebration for grades 9–12. [28] There are private education options provided by The Montessori Academy of Celebration (K-8). [29] Private graduate education is available at Stetson University Celebration Campus. [30] There are free classes offered at the community center by clubs for cooking, gardening, art, writing, and technology.